The Jagstonian Plains is a Territory of the Empire of Adammia, located in the region of North Adammia. It is made up of the southern end of a large park a short walk away from Tytannia Province. It was the first Territory (known as a Territorial Claim at the time) to be established, on 12 January 2014, following a brief military occupation. It was further expanded on 3 January 2019, and it remains the largest contiguous piece of Adammic land, at 90,993m². 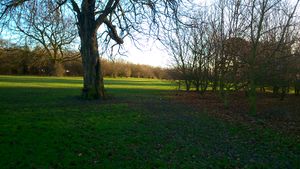 A view of the east side of the Plains.

British residents of the town surrounding the Jagstonian Plains frequently use the area for walking dogs. The Empire has not made any attempt to intefere with this. Adammic citizens visit the park every few weeks in summer, and this often includes patrols by the Adammic Army's Western Regiment.

The southern field of the Jagstonian Plains is home to Adammic Air Force base AAF Jagstonia, the official launch site of the Adammic Imperial Space Agency. All three of AISA's model rocket launch attempts as part of Project Andromeda - the first two of which failed and the third of which succeeded - were carried out at AAF Jagstonia in 2014.