The economy of the Empire of Adammia is largely undeveloped and small. There are currently very few regulations on the Adammic economy and only several businesses operate there. It is split fairly evenly between the public and private sectors. On the Economic Potential Index, Adammia's economy scores 2.5. 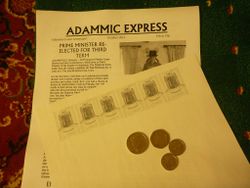 One of two agricultural powerhouses in the Empire, the county of Tytannia has a pear tree, a plum tree and a peach tree, which bear harvests of varying size in recent years. These and other resources imported from the UK are used to make wine, a key industry in Tytannia. However, the products are all given away for free, with only the wine produced by Capital Brewery Ltd. attracting voluntary donations of only a tiny fraction of the wine's actual value. Still, through this the brewery contributed £10 to the GDP in 2017-18. Other parts of Greater Tytannia are largely economically dead; products such as scones and rock buns are occasionally baked in Maternia, and YouTube videos are occasionally produced in Primoria and Maternia (by the channels JakeACake and Mattys Gaming respectively), but these products are yet to be monetised.

Serkatia is home to the Adammic finance industry, with the headquarters of Adammic Investment Ltd. situated there; it is the single largest contributor to the economy. Other companies, both public and private, also have their headquarters in Serkatia; these include the Adammic Express, AB Animation Ltd., Top Hat Software and Adammic Online Broadcasting. However, these companies have been inactive in recent years and have not contributed to the economy.

Myway is similar to Tytannia as an agricultural centre. Peach trees growing there were recently found to have died, however there are also apple trees and also, most notably, a chicken coop containing several chickens, providing Myway with its egg industry. Currently, none of Myway's industries are monetised, so they do not contribute to the Adammic GDP.

The provinces of Alluria and Dank-upon-Bourn, and the territorial claims of the Jagstonian Plains, Kappania, Pererria and Midgard have no discernible economic activity. The colony of El Grandens is home to the Adammic music industry in the form of Sir Cavan Garfield's musical persona Succ, though it is not known if this generates any income.

Currently, the financial industry contributes roughly three-quarters of the Adammic GDP, with the remaining quarter coming from the alcoholic beverage industry.

While there are several industries operating in Adammia, most of them do not export their products, and those that do are usually given away for free. Only the media industry, with its partnered YouTube channels, brings money into the Empire through advertising revenue.

The Empire is almost completely dependent on the United Kingdom for resources and goods. Most food, utilities, fuel, clothing and general goods are imported. These are paid for with money earned through employment in the UK, meaning that the entire economy of Adammia depends on that of the UK.

In March 2014, Adammia imported a product from another micronation for the first time. This was the Adammic Coat of Arms which was created by a citizen of the Ashukov Federation.

Public finance in the Empire is overseen by the Ministry of Finance, which operates His Majesty's Imperial Treasury in Tytannia province. Income comes from voluntary contributions as part of the Contributions Scheme, where adult full citizens living within a certain radius of the Adammic provinces pay a voluntary fee to the Treasury once per month, along with income taxes from Adammia's registered companies. The contributions fee is currently set at £0.50 per month, and the income tax rate is 20%. The MoF usually allows money to build up over several months before allocating it for spending. This has included the purchase of the web domain empireofadammia.org.uk, the frame of the Populus Imperium monument, and a RC quadcopter for the Adammic Air Force. The Empire has no public debt.

All companies in Adammia are registered to the Companies Register, managed by the Imperial Companies Agency. Below is a list of private companies:

The current government-owned companies are: