Joe Daniels is a series of card-based drinking games which were created and remain popular in Alluria, a province of the Empire of Adammia. The games are named after Allurian resident Joe Daniels. The games are generally designed by General Sir Luca Panconi, though with input from other Allurian residents and their associates, and are invariably created by combining Ring of Fire rules with another existing card game. Alongside the Emperor's Fabulous Pub Quiz, the Joe Daniels games are a popular pre-drinking activity for the regulars at Luca's Bar & Casino, which is where the games were written and are exclusively played. 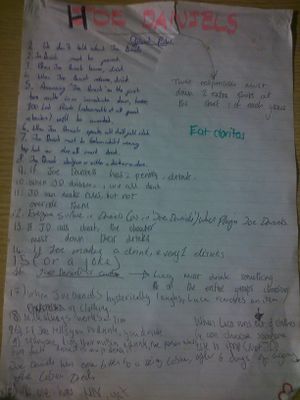 Rules for the original game of Joe Daniels.

The original game of Joe Daniels was created around September 2016. It is an adaptation of Blackjack with a target score of 37 instead of 21. Unlike its successors, the game features an extensive list of arbitrary rules. It is also the only game in the series which places particular emphasis on Joe Daniels himself, giving him a range of abilities and restrictions (indeed, the rules stipulate that the game can only be played when Joe Daniels is present).

Joe Daniels 2: Revenge of the Chode was created around November 2016.

Joe Daniels 3: A New Chode was created in January 2017 at the suggestion of Emperor Adam I. It combines Pyramid with Ring of Fire.