The Populus Imperium monument is a public monument located in Imperial City, Tytannia in the Empire of Adammia. It consists of a frame containing a list of the names of every citizen of Adammia as of October 2014, when it was made, in both English and Latin.

The Populus Imperium monument can be found on the northern wall of Governor's Residence, a structure which adjoins White Gold Palace and is directly next to Imperial Square in Imperial City, the Empire's capital. It is official government property, technically being owned by the Ministry of National Development as that is the department to which the public spending was allocated.

The name of the monument derives from the text at the top of the list: "POPVLVS IMPERIVM ADAMMIAE MMXIV". Plans for the monument date back to around July 2014, when it was first suggested by Emperor Adam I. The allocation of funds from His Majesty's Imperial Treasury to create the monument was endorsed by both candidates in the Adammic National Election 2014 in August of that year. In September 2014, the Public Spending Act 2014 was passed by the Ruling Council, officially ordering the creation of the monument. One week later, the Adammic National Government completed negotiations with the Tytannia Local Government to find somewhere to place the monument. In October 2014, the list was compiled, and the frame was bought using Treasury funds on 22 October. A day later, the list was printed at a nearby macronational college. Finally, on 26 October 2014, the monument was assembled in Tytannia and was unveiled to the public. 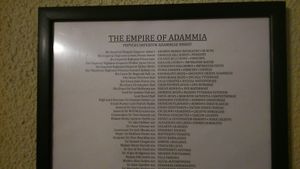 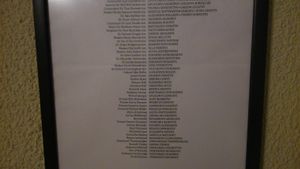 The list comes with several minor errors. The Latin names, in traditional Roman style, replace Js with Is and Us with Vs, however, a few Us have been discovered left in the Latin text. Also, Corporal Michael Mellor is listed with the honourary citizens despite being a full citizen.