From MicroWiki, the free micronational encyclopædia
(Redirected from Foundation Day)
Jump to navigation Jump to search

Foundation Day is a national public holiday in the Empire of Adammia which celebrates the anniversary of the Empire's foundation on 13 April 2013. It is typically marked by celebrations organised by the Imperial Government which include a speech by the Monarch of Adammia and a buffet. 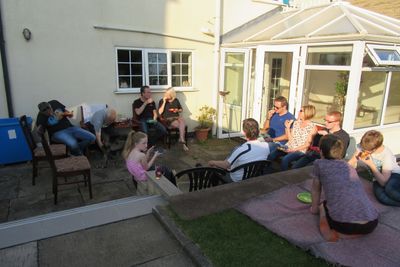 Foundation Day specifically commemorates the day on which Adam Belcher claimed the first Adammic territory, which is considered to be the point at which Adammia came into existence as a country under the terms of the Montevideo Convention of 1933. Belcher discovered micronationalism on 12 April 2013. After carrying out research that night, he first attempted to claim his grandparents' garden - now known as Tytannia Major - on the afternoon of the 13th, which failed due to difficulties in crafting a flag. This established the short-lived legal precedent that all Adammic territory must be denoted by a flag; this was abandoned within a couple of weeks. Upon returning to his home in what is now Adamsville, Belcher crafted a basic paper flag and attached it to the blinds of his bedroom, claiming the room as the Empire of Adammia, during the evening of the 13th. This is the point at which Belcher is considered to have de facto become Emperor of Adammia, although the first recorded instance of him styling himself as Emperor Adam I comes from the following day. Also on the evening of the 13th, the new Emperor secured the Empire's early borders by creating a border sign in the doorway of his room, and writing the first version of the Empire's MicroWiki article.

At this point in time, Adammia operated under an absolute monarchy within a primitive common law system. In the absence of proper legislation, the de facto state of affairs can only be surmised from what was declared by the Emperor, particularly on the MicroWiki page. For example, the status of the meerkat as the national animal was first declared on the 13th when the MicroWiki page was first written. Similarly, the Emperor declared that Hewlett-Packard were to be an "enemy of the state" due to a faulty printer. This system did not last for long - within days, the first version of the Supreme Directive had been written, and it came into effect following its "ratification" by Sir Alex of Poole, who was the only other Adammic citizen at the time, on 19 April 2013, establishing the current legal system (sometimes referred to as the legal continuum). The Supreme Directive formally declared the establishment of Adammia and the rule of Adam I as Emperor and they are considered de-jure from this point onwards.

The fact that the Empire de facto came into existence on 13 April 2013 but was de-jure established on 19 April 2013 could have presented two possible dates for Foundation Day; however, the First Amendment to the second, current Supreme Directive, passed by referendum on 16 November 2013, declared that the official "foundation date" of the Empire was 13 April 2013. Later, the Ruling Council passed the Foundation Day Act 2014 on 8 March 2014, which officially created Foundation Day as a national holiday on 13 April of each year, and endorsed holding government-organised celebrations on (or, implicitly, around) that date.

To date, the only significant celebrations of Foundation Day have been those organised by the Imperial Government. Under the Foundation Day Act 2014, the responsibility for organising these events fell to the Ministry of Culture, now superseded by the Ministry of National Development; however, in reality, many members of the government tend to play a role in organising the celebrations. Emperor Mother Jayne Belcher was in particular instrumental in organising the first two Foundation Day events during her term as Prime Minister; following her departure from that office, she was appointed Director of Events at the Cabinet Office, replacing the defunct Ruling Council Events Committee (which never convened), in February 2017. Therefore, the Cabinet Office has in recent times played a central role in organising the celebrations, through the work of the Emperor Mother as Director of Events and Emperor Adam I as Cabinet Secretary.

Foundation Day celebrations have always taken place in White Gold Palace, in the Empire's capital, Imperial City. However, the celebrations do not usually take place on Foundation Day itself, particularly if it falls on a weekday. As a general rule, Foundation Day is celebrated on the nearest Saturday to the 13th, unless the Insomnia Gaming Festival falls on that day, in which case it will take place on the second-nearest Saturday (as in 2017). The celebrations tend to be attended by the vast majority of the House of Hall and it is considered to be exclusive to them; besides partners of the members of the House (whom many would argue are de facto members of the House anyway), guests have only been present at the 2014 celebrations.

The first Foundation Day, in 2014, was planned as a major celebration of Adammia's progress during its first year of existence. Alongside the now-traditional features such as the Emperor's address to the nation, a Ruling Council meeting and the buffet, there was the Andromeda 1 mission, the very first attempted launch of an Adammic Imperial Space Agency rocket, which failed. Furthermore, numerous members of the Military of Adammia from the Emperor's school were invited, although only two, Commadore Sir Tom Bennett and Colonel Alex Hollis, showed up; a state visit from Lord Richard I of Mercia was also planned but ultimately cancelled. Despite the problems, the day was considered a success.

For the 2015 celebrations, no more guests were invited, although Commadore Sir Dan Pettinger was considered. Instead of a rocket launch, a test flight of an Adammic Air Force remote-controlled quadcopter was carried out by the Emperor, which was observed by some members of the Imperial Family, but was not given a full public demonstration. Uniquely for 2015, some rooms of White Gold Palace were decorated with balloons. A Ruling Council meeting was planned in order to discuss a budget, but this was cancelled due to the absence of the residents of Myway. 2016 was set to be much the same as previously but with the addition of the Emperor's Fabulous Quiz, which had made its debut at New Year's Eve celebrations on 31 December 2015. However, these celebrations were cancelled due to the severe illness of the Duchess of Tytannia Madam Winifred Hall; she died on 11 April 2016, two days after the celebrations had been scheduled, and three days of national mourning extended over Foundation Day itself on the 13th.

The Emperor's Fabulous Quiz made its first appearance at Foundation Day during the 2017 celebrations. However, the date of the event coincided with the Grand National, which many attendees had bets on and were keen on watching. This interfered with the Quiz and caused it to run late, such that some teams had to leave before it could conclude. The government noted that the Grand National usually coincided with Foundation Day and decided to incorporate it as part of the celebrations in future years. Because of this improved scheduling, the 2018 celebrations were considered some of the most successful to date, despite the relatively low turnout.

Foundation Day attendees who won bets on the Grand National on the day are listed below.