His Eminence David Brooke is a micronational politician and diplomat. He is the founder and Sovereign Lord Mayor of The Sovereign Municipality of Ameristralia. Brooke currently holds several roles within micronations, including as the former Secretary of Membership of the now-defunct Alliance of Unified Democratic Independent Micronations. He has served as Minister of Culture and Initiatives in the Micronational Community of Australia, which has been removed as a cabinet position. Brooke founded and served as the first leader of the Green Socialist Party. He is the current leader of the Liberal Agrarian Party, National Executive Committee member of the People's Democracy and serves as the Minister of Foreign Affairs in the Pinang Braithewaite cabinet. Brooke holds military appointments in several micronations. He is the General of the Air Force of the United Kingdom of Great Realeza,[1] Branch Commander of the Royal Air Force in the Kingdom of Blazdonia, and serves as Commander-in-Chief of the Royal Ameristralian Defence Forces.

David Brooke was born in Port Huron, Michigan on 19 of February 1981, to Levi Brooke and Sarah Brooke. He is the eldest child of the Brookes, who had five other children. Brooke was an avid athlete throughout his school years; participating in local baseball leagues and intramural ice hockey games. Brooke lived with his parents until he graduated from a local high school in 1999. He moved to Australia shortly after graduation to study abroad, and learn about the Australian culture. Brooke met his current spouse, Katharine, while studying. David and Katharine were wed atop Mount Macedon on 19 June 2006. The couple spent several years working volunteering with at-risk youth and environmental issues in their local area.

David Brooke attended a local high school in Port Huron, where he graduated in 1999. Brooke made the decision to pursue a profession in law while living overseas. He applied to one of Australia's top colleges and was accepted, earning a Bachelor of Laws degree (Honours). During his studies, he developed an interest in politics and diplomacy. Brooke completed international relations courses while interning at a think tank in the Melbourne area. He went on to pursue his educational ambitions by enrolling in graduate classes in political science and public speaking. Brooke wants to study in a foreign diplomat academy to learn more about international relations.

Brooke's political views have been developed from the experiences throughout his life. Levi and Sarah Brooke are moderate Democrats and instilled the centre-left ideology on their children. After moving to Australia and attending university, Brooke's views changed to reflect those of Libertarianism, advocating for strong private property rights, limited government intervention, and free choice. The change of ideological views from America to Australia had a great impact on Brooke, especially as he studied at university. Brooke began to take an interest in Australian and American politics after acquiring his degrees. He began to study the differences in Libertarian schools of thought. Brooke volunteered for several community organisations as well, advocating for immigrant and young adult rights. This activity led to a change in Brooke's views, as he reflected on the work he was doing in the community and in law. Brooke became a member of the Green Party of the United States and the Australian Greens due to their focus on equality, social justice, and ecological responsibility. Brooke is an advocate of societal responsibility, therefore he subscribes to the ideals of Collectivism. His views inspired the development and formation of the Green Socialist Party where Brooke founded the party and was it’s Chairman. Brooke is also the Liberal Agrarian Party (Norton) Leader and Leader of the Opposition of the State of Norton.[2]

Development of The Sovereign Municipality of Ameristralia

Brooke and Katharine educate their children at home. Brooke suggested the development of a micronation as a technique of mentoring the Brooke children in civics, civil duty, diplomacy, organisation, administration, and courteous conversation since she is interested in politics and government procedures. During the creation of Ameristralia, he served as the project's "advisor." For his efforts in establishing the programme and conducting research for a successful endeavour, he was formally chosen Lord Mayor of The Sovereign Municipality of Ameristralia. The municipal flag, logo, peerage coats of arms, colours, symbols, and Constitution were all designed by Brooke.

Sovereign Lord Mayor of The Sovereign Municipality of Ameristralia 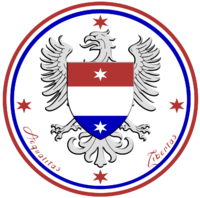 Seal of the Sovereign Lord Mayor

Secretary of Membership of the Alliance of Unified Democratic Independent Micronations

The Sovereign Municipality of Ameristralia was accepted as a full member of the Alliance of Unified Democratic Independent Micronations, or AUDIMN, on 14 August 2021 after petitioning the organisation for membership. The Chairman of AUDIMN, President Burfield of the State of Norton, appointed Brooke as a member of the Executive Committee (similar to the United Nations Security Council) as the delegate of Ameristralia. He was subsequently appointed the Secretary of Membership for the alliance; creating the membership application process and managing membership data. The Chairman formally dissolved the organisation on 26 September 2021, citing unprofessional and misappropriate behaviour of some member states.

David Brooke resigned as Leader of His Majesty's Official Opposition and Chairman of the Green Socialist Party on 3 December 2021, due to a political negotiation with the Prime Minister of Vishwamitra that became a scandal.

Minister of Culture and Initiatives of the Micronational Community of Australia

The Sovereign Municipality of Ameristralia was elected to full member status of the Micronational Community of Australia on 16 August 2021. After the re-election of the current President of the organisation, the Honourable Zechariah O'Hair, Brooke was appointed the Minister for the newly combined Ministry of Cultural Affairs and Initiatives on 2 October 2021. His Eminence was also elected to the role of Safety Officer of the organisation in October 2021. Mr Brooke is responsible for ensuring the organisation develops and maintains a strong culture through initiatives and programs that impact the greater member communities. He is also responsible for the background checking of all applications submitted to the Minister of Membership and General Affairs, to assure the dignity and mission of the consortium is not damaged.

Brooke resigned from the Ministry and as Safety Officer of the organisation on 4 December 2021, citing personal reasons.

Brooke was appointed as Leader of the Liberal Agrarian Party in the State of Norton upon his citizenship being approved. As the political party with the second-highest seat total in the National Senate, Brooke automatically became the Leader of the Opposition. Brooke is preparing the party for the upcoming February 2022 Norton general election.

Brooke currently chairs the Exceptional Foreign Affairs Commission, which is responsible for the audit and maintenance of diplomatic relations in Pinang.

As the fount of the orders of Ameristralia, His Eminence has garnered several national honours. He's also earned a number of intermicronational awards for diplomacy, friendship, and assistance to fellow governments. Brooke has received military awards as the Commander-in-Chief of the Ameristralian troops. The following is a complete list of awards, listed in order of importance from highest to lowest.

As the fount of all orders, the Sovereign Lord Mayor is bestowed the honour of Sovereign of all National Honours and may at his leisure create new dynastic orders for the purpose of recognising the contributions of individuals regards Ameristralia. There are currently three dynastic orders and two municipal orders granted by His Eminence.

Brooke is a supportive allied leader and diplomat for Ameristralia in the micronational community. Throughout his micronational career, he has received various foreign honours for his diplomacy and assistance of allied and non-aligned governments.

David Brooke wears awards on a regular basis in line with customary customs related to the occasion, the place, and the kind of attire worn. David Brooke currently wears the following ribbons: