New South Scotland (known in Australia as Quadrangle Lawn and formerly known in Zealandia as Nya Ystad) is an Austenasian Crown Dependency situated on the eastern seaboard of the Australian continent. Between June 2014 and September 2016, the polity was administered by the Commonwealth of Zealandia, although de jure Austenasian sovereignty over New South Scotland continued to be acknowledged. De facto Austenasian rule was restored to the Crown Dependency that same month with the appointment of the territory's first Austenasian Governing Commissioner. A territorial constitution was promulgated in April of 2020, handing the Crown Dependency its own system of local governance.

Established on 19 November 2012 as a colony of New Wessex, having formerly been part of an Australian university campus, the colony was ceded to the Empire of Austenasia on 20 January 2013 by Declan I upon the ascension of Jonathan I to the Austenasian Throne. New South Scotland was formally made a Crown Dependency of Austenasia on 25 January, by the First Imperial Decree of HIM Emperor Jonathan I. The then Haakon Lindstrom, also monarch of the nearby nation of Zealandia, was appointed New South Scotland's Governing Commissioner.

Relations between Austenasia and Zealandia remained extremely frosty for over a year over the subject of New South Scotland and Lindstom's actions in relation to it, but began to thaw in 2015 after a treaty was signed formalising the arrangement. Relations between the two nations warmed considerably in mid-2016 as a result of uniting against diplomatic attacks from Sandus, and in July 2016 the Austenasian government was contacted by Lindstrom who informed them that she was unable to continue administering the crown dependency due to her and many members of the Zealandian government and military leaving the university which borders New South Scotland. After negotiations, a treaty was signed returning New South Scotland to full and exclusively Austenasian jurisdiction on 10 September 2016. Later that day, Emperor Jonathan I appointed The Rt Hon. Sir Hugh McFarlane, KCA as New South Scotland's second Governing Commissioner.

The following four years of Austenasian administration saw few notable events occur within the Crown Dependency, with the exception of a visit by a delegation of several Australian tourists in 2015 (including future Governing Commissioner McFarlane KCA). In April of 2020, when a constitution was passed granting the territory its own system of democratic self-government. A territorial website was established as part of an effort to attract more citizens.

New South Scotland is governed by Sir Hugh McFarlane, a friend of Emperor Jonathan I who lives near to the crown dependency. The position had previously been held by Charlotte Lindstrom, who held the position of Governor when New South Scotland was a colony under Wessaxon rule, and ruled as Governing Commissioner in the name of the Emperor before 10 September 2016. Lindstrom established the New South Scotland Constabulary in August 2013 to provide law enforcement in her absence, although this force had become defunct by May 2014.

Under the Crown Dependency's constitution, territorial political parties are required to adopt a democratic system of internal organisation. Parties are also constitutionally required to maintain a public list of their membership.

New South Scotland has an area of approximately 3.3 square kilometers. The territory is located within the campus of the University of New South Wales (UNSW) and is bordered by the City of Sydney, Australia. The geographical position of New South Scotland means that it regularly frequented by students and teachers attending the university, having a huge effect on the geography, culture and economy of the area. The flora of New South Scotland is not very diverse, only featuring several trees and an extensive grass area. This grass area is used by students as a place to relax, which brings some environmental issues such as food waste which attracts fauna such as the Australian White Ibis. In the interest of preserving the area, groundskeepers at the university maintain the environment by removing litter and mowing the grass. Three pathways also exist, and are used as a major throughway for students and teachers. Drainage pipes and gutters border New South Scotland to protect against minor flooding and rainfall damage; since it is a small catchment area, this task is essential.

Bordering New South Scotland are several areas of varying economic activity, however very little occurs within the borders themselves. Nearby, multiple vending machines can be found, which dispense food and drinks to students. These machines are operated and owned by the university itself, but it is unclear if they generate any profit at all. Numerous shops are located a short distance away from New South Scotland, such as a pharmacy and the university bookshop. A Commonwealth Bank Automatic Teller Machine (ATM) also exists near to these shops which is used to fund transactions across the university. A section of the UNSW Business School is also housed within the large building that is directly next to New South Scotland itself. It is one of the major faculties at UNSW, and teaches a variety of courses regarding economics and commerce and has had a hand in creating some economic activity around the university campus. 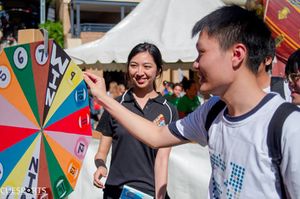 Close by to New South Scotland is the university health clinic and dentistry, provided by UNSW itself. Not only does this facility treat students suffering from an array of health complications, but it also acts as an Infectious Control Zone (ICZ), which is used in the case of an epidemic as a location to treat patients. On display at this clinic are pieces of information regarding how to deal with current diseases and what major symptoms are. Whilst these services are technically outside the borders of New South Scotland, should any major disease outbreak occur, New South Scotland itself may well be used as a grounds for dealing with the issue. A pharmacy is also nearby which sells many different medical and cosmetic products.