Peach Ponds is an Austenasian territory consisting three small bodies of water and the area surrounding them. It is currently governed by Lord Casper von Naveria, Count of Cowyetton, who also serves as Austenasian Consul to Georgia. Peach Ponds was annexed on 4 April 2020.

The Territory of Peach Ponds was, prior to its annexation by Austenasia, known as Huddleston Pond Park, named after one Bob Huddleston (b. 1883), a farmer who once owned the land on which the park and much of the surrounding Peachtree City was built. On 29 February, Casper von Naveria contacted Emperor Jonathan I of Austenasia with an offer of claiming the park for Austenasia.

After about a month of discussion and preparation, the park was claimed by von Naveria in person on 4 April 2020 with a short flag-raising ceremony. Due to the ongoing COVID-19 pandemic, the ceremony was kept brief and attended only by von Navārdia himself. The same day, Jonathan I passed an Imperial Decree, officially recognising the claim and integrating Peach Ponds into the Empire, with von Naveria appointed as its Governor.

On the 7th of April, Governor Casper announced that Peach Ponds would cooperate with Peachtree City and Georgia orders regarding the coronavirus, allowing the placement of traffic cones at U.S. borders and enforcing a stay at home order until at least the 13th. In addition, half of the Peach Ponds Library in Fort Tramor was temporarily converted into a Little Free Pantry with mild success.

Peach Ponds' main geographical feature is Huddleston Pond, which is home to large populations of fish and waterfowl. Two unnamed retention ponds surround Huddleston to the east and west. Loblolly pines and other trees surround the bodies of water, making up the woodlands that dominate Peach Ponds' dry land. Various deer, rodents and leporidae have been spotted in the woodland regions. Geopolitically, however, Peach Ponds consists of three districts, each having unique geographical or historical features that set it apart from the rest.

The Frontera district is the territorial capital of Peach Ponds, and makes up about 32.7% of the territory's area. Its name means border in Spanish, and also sounds similar to the English word, “frontier”. It is named for the southwestern border crossing between America and Austenasia, which is host to the Peach Ponds border sign and the small flag often flown over it. The smaller of the two retention ponds within the territory can be found north of the border sign. It is home to the first geocache hidden within Austenasia[1]. East of the border is a viewing platform and a water fountain. 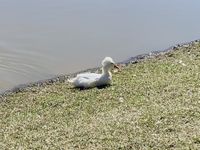 The Metsik district is the largest district in Peach Ponds, making up about 34.7% of the territory's area. Its name means wild in Estonian. Metsik is named for the wild animals found within the district, which are the most numerous and diverse in all of Peach Ponds. The most widely-known landmark in Metsik is the small gazebo located near the district's land border with Fort Tramor, within which parties and conferences are held by people from many of the local nations. The northwestern border crossing is also found within Metsik, on the opposite side of the district.

Many different animals are found within the Metsik district, including deer, various waterfowl, squirrels and even rabbits. Deer are most commonly found in the southwest, while waterfowl are found at or near the coastline. 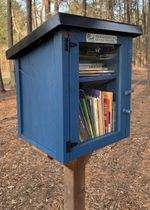 A Little Free Library [2], owned by the government of Peach Ponds, in Fort Tramor

The Fort Tramor district makes up 32.6% of Peach Ponds' area. It slightly smaller than Frontera, though Google Maps measurements place them both at 4.59 acres. Its name is a combination of the Latin word for strong or brave, and the Welsh word for foreign or overseas. It is named for the abundance of athletic equipment built within the district, and the two border crossings - northeast and southeast - that it contains. The larger of the two retention ponds can be found within Fort Tramor, which is partially fenced off (likely so that children playing near the outdoor equipment don't endanger themselves).

Peach Ponds formally accepts the pound sterling, the national currency of Austenasia, as well as the Atlanto, a community currency created by local micronationalists. As such, it is one of the few micronational entities in Georgia that does not accept the United States dollar.