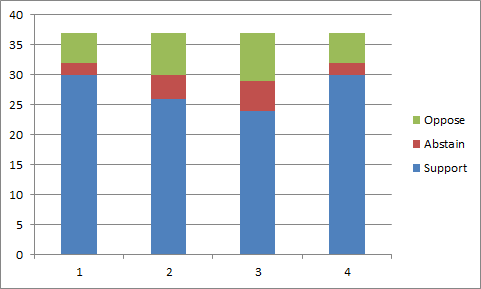 Twelve amendments were proposed, grouped into four parts which could be voted on separately. The first part of the proposed group of amendments establishes a Senate as a body responsible for the accountability of the Monarch which may in extreme circumstances vote to depose them; the second part reflects the Roman and Christian culture of the Empire by explicitly claiming that Austenasia is a continuation of the Roman Empire and by making it a requirement for the Monarch to be a baptised Christian; the third part defines marriage as between one man and one woman; and the fourth part has the Deputy Prime Minister appointed by a newly elected Prime Minister rather than being the runner-up in the election.

All four parts of the proposed amendments passed, each receiving over 50% of votes in support. Thirty seven Austenasian subjects voted on all four parts, with a total turnout of 68.52%.

With the Second Amendment having been approved by referendum, it now had to be approved by both the Monarch and over 80% of the House of Representatives to be brought into force. At that time there were seven Representatives in the House, meaning that six would have to support. On 8 January 2018, Parliament passed the Second Constitutional Amendment Act 2018, giving said approval and decreeing that the Amendment would come into force at one second past midnight on 20 January 2018, the fifth anniversary of the ascension of Jonathan I to the Throne. Whereas most Acts of Parliament are given Imperial Consent by the Monarch as soon as the voting threshold in the House of Representatives is passed, with this Act the Emperor had to wait until six votes in support had been given; the Representative of Ionathanopolis was the only Representative who did not vote in support of the Act.

The Human Rights Act 2018, passed by Parliament on 16 February 2018, repealed Article XII, Section D of the Constitution as permitted by the Amendment, and replaced and expanded its provisions.

Paragraph 4 of the Amendment had changed the criteria for members of the Cabinet, meaning that they no longer must be drawn from the House of Representatives. On 29 January later that month, Lord Karl Friedrich was appointed Chancellor, the first ever Cabinet member to not simultaneously be a Representative.