Esmondia (/ɛsˈmɒndiə/ ess-MAWN-dee-ə, Sabian: eħmondia, IPA: [exˈmondia]) is a Crown Dependency of the Empire of Austenasia situated in South America, bordering Argentina's Autonomous City of Buenos Aires to the north, west and east, and the Sabioveronese Gonn Region to the south.

Named after former Austenasian Emperor Esmond III, Esmondia was founded on 29 October 2015, as the result of a previous agreement between King Tarik of Sabia and Verona and Emperor Jonathan I of Austenasia.[1] Tarik had previously been Governing Commissioner of the Crown Dependency of Achem, which was removed from Austenasia's claims following the foundation of Esmondia.[2]

The origins of Esmondia can be traced back to the establishment of the Austenasian Crown Dependency of Achem in the Valtir Sector in December 2014, as part of an agreement between Emperor Jonathan I of Austenasia and King Tarik of Sabia and Verona, who offered the land to the Empire of Austenasia following an oversight of a Sabioveronese territory law, which failed to include the specific portion of land despite the Sabioveronese government's intention to do so. Instead of going through the process of revising and updating the law, the two monarchs agreed on turning the land in a Crown Dependency of Austenasia which was subsequently known as Achem, which was administered by King Tarik as Governing Commissioner.[3]

On 25 August 2015, King Tarik and most of the Sabioveronese royal court moved from Salisse to Alios, the country's new capital some 7000 kilometers to the south, bordered by Argentina. Unable to administer Achem in the name of the Austenasian Emperor and having found no replacement, both monarchs decided to remove the territory from Austenasia's claims.[2]

After months of informal talks, King Tarik offered a new patch of land, directly adjacent to the Gonn Region, to become a Crown Dependency. The territory was initially set to be named "New Achem", but after Tarik suggested naming it after an Austenasian Emperor, it was decided the Crown Dependency would be known as Esmondia, in honour of Esmond III. The annexation of the territory was met with much acclaim in Sabia and Verona, with celebrations being held in Alios following the event.[1]

Esmondia's territory consists of a 20 m2 square green patch surrounded by a residential area, at an altitude of 25 meters above sea level. Esmondia is located a few kilometers inland from the River Plate, which defines the border between Argentina and Uruguay in the Southern Cone. Esmondia is the Southernmost of Austenasia's claims, standing just south of the 34th parallel south and narrowly beating New South Scotland by a couple of miles. 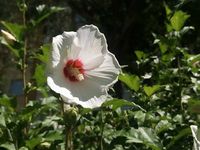 Nearly all of Esmondia's territory is covered in grass and trees, and Esmondia is commonly known in Alios and Gonn as the "garden realm" or "green realm"; this is represented in the territory's flag and emblem. Only a few of Esmondia's trees are deciduous, and so the territory keeps its traditionally "green" appearance even during the mild winters that the area experiences.

The flag of Esmondia consists of a ~7:11 light green field with the Austenasian star on the canton, and a southern cross made of grey-bordered white stars. The flag was designed by Tarik Kârjasary, and adopted upon the creation of Esmondia. The green represents the abundant flora and evergreen pastures of the territory; the southern cross represents Esmondia's position as the southernmost territory of the Empire. The Austenasian star is meant to symbolize Esmondia's allegiance to the Emperor. The flag has the same proportions as the flag of Austenasia.