Austenasian culture is the pattern of human activity and symbolism associated with the Empire of Austenasia and its people. It is a primarily Western culture heavily influenced by that of the medieval Roman "Byzantine" Empire at a national level and often by the culture of the surrounding larger nation in regards to the individual exclaves of the Empire. It has been shaped since the foundation of the Empire by the customs, ideas, and contributions of those who have joined or been associated with Austenasia.

English is the most commonly spoken language in Austenasia, known and used daily by the majority of the population. English is generally the only language used for government business, although some Latin is rarely used for more ceremonial occasions. There are exceptions to the dominance of English in Austenasia. In Enfriqua, French is the vernacular; Marathi in Imperia; Turkish in Chalcedon and Trebizond; Ukrainian in Chersoneses; and Estonian in Oppidum Tubae; Mandarin Chinese in Shuhan; and Dutch in Helinium. In New Pontunia, Pontunian, a constructed language, is an official language.

Latin is also - rarely - used in some ceremonial contexts, such as the national motto and the consular names of each year's Consuls. Swedish held the status of an official language in New South Scotland from the start of its administration by Zealandia in June 2014 until being repealed in April 2020, but had not been commonly used there since the return of the crown dependency to imperial governance in September 2016.

The national anthem of Austenasia is God Save the Emperor. 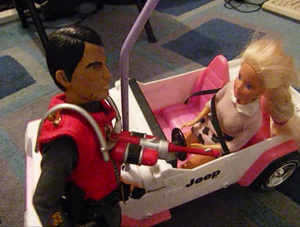 A scene from Cool Barbie II - Return of the Champion.

Residents of the Austenasian enclaves around the world read newspapers imported from and watch television channels broadcasted from their neighbouring countries. The Austenasian Times is the semi-official Austenasian news service, founded by Jonathan I in November 2012 while he was still Crown Prince. Porthbokon News, existed as a local news service in the Empire, catering primary to the Town of Porthbokon before its dissolution in 2017.

Austenasia has its own broadcasting corporation, Austenasian Television Productions (ATP). ATP, founded in December 2008, produces films for Austenasian Events, a set of small documentaries which record events concerning the Empire. It also publishes Cool Barbie, a sci-fi fantasy drama about a Barbie's encounters with extraterrestrials and villains in a world where toys are alive. Public broadcasts by the Monarch and Prime Minister are also published online by ATP. All of these films are published on the ATP YouTube account, where they can be viewed free of charge. 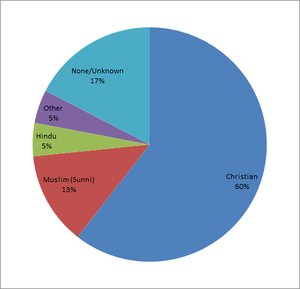 Religions professed by Austenasians as of 29 October 2020.

Since 21 June 2017, Austenasia has been an officially Christian country. Christian feast days are celebrated as public holidays, and Christian symbols are used for example in the national coat of arms, but freedom of Austenasians to choose and practice their own religion has been guaranteed by law since December 2008, and is entrenched under Article XII, Paragraph C of the Constitution.

Out of all Austenasian subjects and residents, 82.57% profess belief in a religion, with 17.43% either identifying as atheist or agnostic or not stating any religion.

The majority of Austenasians - sixty six people (60.55%) - identify themselves as Christians of some kind; twenty five Protestants, eleven Orthodox, twenty eight Roman Catholics, and two Mormons. Of the remaining religious population of Austenasia, Sunni Islam and Hinduism have fourteen and five adherents respectively. Five individuals are listed as "Other": two Humanists, one Shorelinian Deadhead, one Pagan, and one who identifies simply as "Spiritual".

From the founding of Austenasia in September 2008 until the introduction of the first non-residential subject in April 2010, the entirety of Austenasia's population identified as Methodist Christians. As the number of new subjects grew, so did Methodism decline within Austenasia, and today is professed by just 5.5% of the population.

From the founding of Austenasia until March 2011, all four residents of Wrythe attended Carshalton Methodist Church, with rates of attendance varying for each resident ranging from every Sunday to special occasions such as Christmas services. The church was the site of the Merger Club between 2005 and 2009, and was (and is still) attended nearly every week by all three former residents of Zephyria. Two instances in 2009 - a Sunday in June, and Christmas Day - witnessed the whole population of Austenasia attending the morning services, possibly the only times in history that an entire nation has been present at a single religious service. Several crosses made of palm leaves given out at Palm Sunday services can be seen on the mantelpiece in Parliament Hall in the Imperial Residence.

Austenasia's only officially recognised place of worship is a miniature roadside Orthodox Christian chapel located in Kaiomenia. The small shrine is dedicated to Saint Menas, and is situated on the edge of the road which marks the border between Kaiomenia and the neighbouring country of Greece, in which such small roadside chapels are common.

Over three fifths (60.55%) of Austenasians are Christians, mostly Western:

HIM Emperor Jonathan I converted from Methodism to the Orthodox Church in early 2011 and was chrismated on 24 July later that year. He currently attends the Greek Orthodox Church of Saints Constantine and Helen most Sundays.

Religion and the law

Religious topics have often been referenced in Austenasian statutes.

On 21 June 2017, Christianity was declared the state religion of Austenasia by the passage of the State Religion Act 2017. No denomination in particular was specified, but rather Trinitarian Christianity as a whole.

Although Austenasia is a parliamentary monarchy, the Constitution enables the Austenasian Monarch to wield and exercise substantial executive, legislative, and judicial power. The Austenasian government was originally based loosely on that of the United Kingdom, with the Monarch playing a mostly ceremonial role and most power and influence being wielded by the Prime Minister. The reign of Emperor Esmond III saw the Monarch beginning to be viewed as a symbol of the nation itself, and the powers and influence of the Monarch increasing at the expense of the elected legislature. This process continued after his reign, with the Austenasian Constitution of 2011 transferring many of the executive powers of the legislature - most notably the power to appoint Cabinet ministers - to the Monarch. Under the current reign of the incumbent Emperor Jonathan I, the Monarch is the indisputable chief executive of the Empire.

Since the reign of Esmond III, a world-view often known as the Imperium theory has grown in popularity within Austenasia, being partially adopted by official legislation during the reigns of Jonathan I and his predecessor. This worldview, which is both officially and popularly adhered to by the other Carshalton Nations and also particularly prevalent amongst the Austenasian Armed Forces, attaches significant importance to the title "Emperor", viewing the Austenasian Throne as being in succession to that of the Roman Emperors. This has helped accelerate the increase of monarchical authority in Austenasia and also resulted in several Roman elements being adopted by the Empire, such as a Latin national motto loosely based on SPQR, a system of annually-appointed consuls, and addition of Roman imperial titles to the official style of the Monarch.

The capital city of Wrythe has been home to three structures known as monuments. The oldest, Wrythe Pet Cemetery, was constructed in late 2008 by order of Emperor Terry I, by unearthing the coffins of two previously buried deceased pet goldfish and translating the graves to a new site, alongside a third recent burial. Four more burials have taken place at Wrythe Pet Cemetery since July 2009, and repairs are carried out annually. 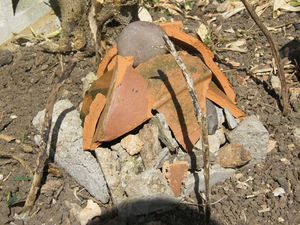 The Orange Pyramid on the day that it was unveiled, 12 April 2011

Another monument, also ordered by Emperor Terry I (but constructed under Emperor Esmond III and unveiled in January 2011, by which time Emperor Declan I also held the Throne) is Wrythe Genocide Memorial. This is a simple stone stele which was unveiled on International Holocaust Remembrance Day 2011 to commemorate the memories of all genocide victims.

The most recent monument constructed in Wrythe was the Orange Pyramid, built under the orders of Crown Prince Jonathan in honour of Emperor Declan I and Wilcslandian culture, and unveiled on 12 April 2011. The base of the pyramid was comprised of blocks of cement, whereas the main outside walls were constructed out of pieces of orange pottery (hence the name "Orange"), and the pyramid was filled inside with pieces of masonry, cement, pottery and gravel. After practically collapsing in under a year due to lack of structural integrity, the pyramid was completely rebuilt in May 2012 in celebration of the Tin Jubilee of Declan I as Wilcslandian monarch, with some parts of the old monument being re-used in the construction of the new. The pyramid was destroyed in February 2014 by strong winds knocking branches of a nearby bush into it, and the ruins were cleared away by Wrythe Town Council in late June 2015.

The Empire celebrates several national public holidays each year, many of which are Christian feast days. Public holidays are officially defined in the Public Holidays Act 2014 as "days of celebration, on which employers are encouraged to offer leave from work to their employees." Many other holidays may be adopted for observation by individual Towns and Territories. Furthermore, three (two if Remembrance Sunday and Armistice Day coincide) other days are nationally observed each year as days of commemoration, but not as holidays, and any public or bank holiday in the United Kingdom is also observed as a public holiday in Austenasia. The feast day of the patron saint of a specific Town or Territory, and/or of a nation of which a significant proportion of the residents of the respective Town are also members, may also be celebrated locally.

In regards to the several holidays which are dated in relation to Easter, local authorities decide whether to observe the holiday in relation to Western Easter, Orthodox Easter, or both.