Wrythe Genocide Memorial is a monument situated in Wrythe Public Park, in the capital of the Empire of Austenasia.

The Memorial is to commemorate the memories of all genocide victims, and was unveiled on International Holocaust Remembrance Day 2011 by Crown Prince Jonathan of Austenasia. 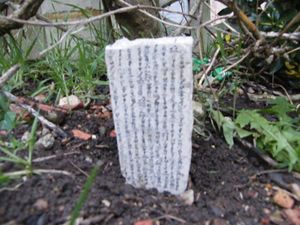 Wrythe Genocide Memorial on the day it was unveiled, 27 January 2011

However, work on the monument did not get underway until the reign of Emperor Esmond III - it was completed in August 2010, but it was decided that it would not be officially unveiled to the public until January 2011, on the next International Holocaust Remembrance Day.

Crown Prince Jonathan of Austenasia, Representative of Wrythe, unveiled the Memorial on 27 January 2011 in Wrythe Public Park. It remains standing to this day. Flowers were laid at the foot of the monument on the one year anniversary of its unveiling.

The memorial consists of a simple stone stele - on one side was a list of several genocides ending with the wish that they may never be repeated and the words "may peace prevail", written in Moylurgian hieroglyphs (the English language using an Ancient Egyptian-styled alphabet, used in Austenasia for ceremonial purposes). On the other side were the words "Never Again, Never Forget", written in Hebrew, Armenian, Arabic, Latin, Moylurgian, and English. In June 2012, weeds overgrowing the memorial were cut back to reveal that the glyphs and writing had worn away, with the faded Imperial Cypher and the pencil lines which separated the columns of glyphs remaining visible - by October 2012 the cyper too had worn away, leaving only the pencil lines.