The Wilcslandian monarchy was the absolute monarchy ruling over the Kingdom of Wilcsland. King Declan I, II & V, known in Wilcsland as Ptolemy I, reigned as monarch of Wilcsland and its predecessor states from 1 May 2002 (with an interruption of one week in the summer of 2006) until he was overthrown by his brother, Ptolemy II, at the close of 2014.

The ceremonial full title of the king, used only in their full style, was King of Wilcsland, Taklamacan, the Midway Hills, Frozen Alters and Corran. This was at times supplemented with the titles King of New Wessex, King of Thebes, and/or King of Saqqara.

The King undertook various official, ceremonial and representational duties. As an absolute monarch, the King held absolute power over all executive, legislative, and judicial matters. The King was the main representative of Wilcsland in foreign affairs, and held total control over all domestic governance, appointing members of government and bestowing and revoking titles of nobility.

Despite the power that the King had over the nation, it was held only through the will of the people. Declan I while King of Moylurg would declare "my people are my care" and "I work for you, not you for me". Although absolute, the Wilcslandian monarchy was founded on the theory of the complete delegation of popular sovereignty. This was especially apparent in November 2010, when Moylurg transitioned into Wilcsland; King Jonathan I, titular joint King, was not deposed by King Declan I as they held nominally equal power, but was instead deposed by an assembly of the people who were displeased at having a foreigner share the rank and title of Declan I. 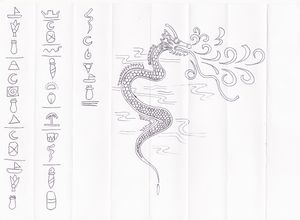 A Moylurgian artwork from August 2010 declaring the absolute power of the monarch: "The power of the King of Moylurg and Copan is absolute".

The King of Wilcsland at various times also held the thrones of several other realms and nations, holding these thrones in either political or personal union (often with very little practical difference). The kingdoms of Saqqara and Thebes were sub-kingdoms of the Wilcslandian monarchy since Saqqara was founded by and Thebes was conquered by the Kingdom of Atlantis in late 2003. With the founding of New Wessex (see below) in January 2012, Thebes was abolished as a subkingdom and fully merged into Wilcsland, with the same happening to Saqqara around June 2013.

All of the Carshalton Nations were under the rule of the Wilcslandian monarch between December 2010 and January 2013. Declan I took advantage of an interregnum in the Kingdom of the Grove to unify it with Copan, founding the Tsardom of Orly and provoking the Carshaltonian overlord, Emperor Esmond III of Austenasia, into starting the War of the Orlian Reunification. A local nation allied with Orly, the Midget Nation-in-Exile, declared Declan I to be the Fifth Midget Master upon the instigation of the then Crown Prince Jonathan, entering the Midget Nation into personal union with Wilcsland. With the support of the Midgets and the orchestration of the Crown Prince, the forces of Declan I were able to defeat those of Esmond III, and Declan I was declared joint Emperor of Austenasia and King of Rushymia. On 14 January 2012, Declan I (by then known as Ptolemy I in Wilcsland) declared the creation of the United Kingdom of New Wessex as a political union between Wilcsland and Orly, with the two becoming the constituent countries of the new union.

Declan abdicated from the Austenasian and Rushymian thrones on 20 January 2013. On 24 June 2013, Orly seceded from New Wessex in an event known as the Liberation of Orly. No longer Emperor, the Orlian population no longer had a reason to respect the authority of Declan I and so turned to his successor as such, Emperor Jonathan I, to appoint native monarchs under Austenasian suzerainty as had been the original practice. Declan I abandoned any claims to sovereignty over Orly and relinquished his claim to the title "King of Orly" after being persuaded that there was no support for his reign there to continue.

On 31 December 2014, Declan's brother Prince Ciaran declared himself the new King of Wilcsland as King Ptolemy II, overthrowing his brother who by this point had moved away from his lands to London resulting in the near-collapse of the kingdom. Ptolemy II formally dissolved the defunct "union" of New Wessex, and arranged for Wilcsland to become a protected state of the Empire of Austenasia, but had otherwise inherited an impossible situation. The new king was unable to overcome the challenges faced by his kingdom, and what little remained of Wilcsland soon fell apart. The only major action taken by Ptolemy II was to appoint the now Brooklyn Hewitt his co-monarch as King John II on 30 April 2015. After nearly five years of titular reign by the two, Wilcsland was officially dissolved by John II on 31 December 2019, resulting in the end of the monarchy.

The reign of Declan I saw several usurpers, as well as the appointment of many vassal and co-monarchs. King-Regents and Queen-Regents were co-rulers that, while sharing the royal style and powers of the King proper, were titularly subservient to him and could be deposed by him at any time. There were only co-monarch to have had nominally equal power to the King, namely Jonathan I (of Moylurg) and John II (of Wilcsland), who were both referred to as "King" rather than "King-Regent". In the case of Jonathan I, although his appointment was titular and power nominal, he had to be deposed by an assembly of the people rather than his co-ruler due to his equal status.

Subordinate co-monarchs were titled as "King/Queen-Regent" because of a spelling mistake made upon the appointment of Frances I in 2009, which simply became standardised. The title "Queen Regnant" had been intended, to specify that she was an actual monarch and not the consort of Declan I.

Those raised to the throne alongside Declan I and Ptolemy II:

Those who proclaimed themselves monarch and attempted to overthrow Declan I:

Those who ruled over the sub-kingdoms and vassal monarchies of Wilcsland, its predecessor states, and New Wessex:

The Royal Standard of New Wessex is the flag used by the King or Queen in their capacity as monarch.

The Royal Standard depicts the central part of the Wessaxon coat of arms - that is, four quadrants, depicting in the first and fourth quarters a lion rampant (the national animal, and to represent the English origins of New Wessex) and depicting in the second and third quarters a Cláirseach (Irish harp) to represent the Irish heritage of the House of Mac Donnchadha-Houghton.