The Empire of Moylurg was a short-lived incarnation of the Kingdom of Moylurg.

On 7 March 2010, King Declan I of Moylurg, the Taklamacan, and Corran, unified those three Kingdoms (as well as the smaller Kingdom of Midway Hills) into the Empire of Moylurg, with himself as Emperor, and giving himself the alternative regnal name of King Tanwetamani. 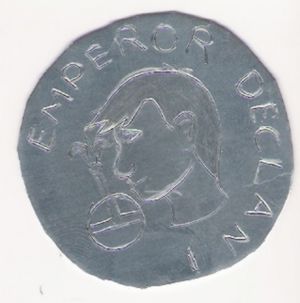 A coin of Declan I made while Moylurg was an Empire

Although the political union remained, the following month the nation was renamed the Kingdom of Moylurg, and Declan I renounced the Imperial title.