The Wilcslandian Pyramids were two pyramids, now in ruins, situated in the Kingdom of Wilcsland that were built during the reign of King Declan I.

The first pyramid was built while the land was still part of the Kingdom of the Taklamacan - some time between late 2007 and June 2009. Little is known about this pyramid, other than that it is now in ruins.

The second pyramid was built during the Old Kingdom, First Intermediate Period, or Middle Kingdom of the Kingdom of Moylurg, when the nation was also known as Deleckshum - some time between 11 June and 13 October 2009. 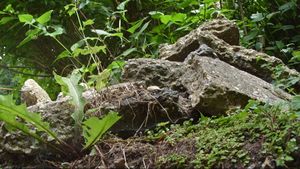 The ruins of the Deleckshumite Pyramid, July 2010

Some information is known about how this pyramid was built - it is likely that the Taklamacanian Pyramid (see above) was also built this way, but it is unknown. Firstly, soil was removed from the ground to make way for foundations. These foundations would have consisted of a compact soil layer, and above that a layer of soil and rubble, upon which the pyramid could be constructed with confidence.

Most of the damage to the Deleckshumite Pyramid was caused by plants growing among the foundations, eventually forcing the stones apart into a pile of rubble. A Moylurgian archaeological survey carried out in July 2010 discovered a glyph stone amongst the ruins of this pyramid, a shard of slate with an example of Deleckshum Heiroglyphs - this was one of the only known examples of this writing system left in Wilcsland before it was lost in May 2011 (photographs of the Glyph Stone have fortunately been preserved).