The Foreign Office is run by the Chief Ambassador, a position which has been held by the Emperor since October 2017. The Foreign Office has numerous diplomats assigned to various states, regions and organisations; these are appointed by the Chief Ambassador, who through holding that office holds responsibility for relations with all nations and peoples that do not have a specifically designated diplomat. The function of ambassadors and consuls in countries which do not recognise Austenasia is simply to raise awareness of the Empire's existence within the country they have been assigned to and to represent the Empire to regional or national authorities should it be necessary. 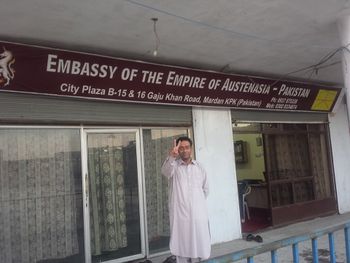 H.E. Tariq Zubair, Ambassador to Pakistan, outside the Austenasian Embassy.

The Empire officially claims four properties at present as embassies and consulates. Only one Austenasian embassy - that to Überstadt - is accredited by the host state, but said embassy is also the only one which is not manned by an ambassador. Austenasia claims extraterritoriality for all its embassies - the August 2015 Decree of Wrythe claimed administrative control by the Chief Ambassador (as opposed to the laws of the host state) for Austenasian embassies as a manifestation of this extraterritoriality.

The currently claimed embassies of Austenasia are:

Austenasia currently hosts a single official embassy: the Kingdom of Copan uses East Wrythe, an exclave of the capital, as a Copanese embassy. The capital was also home to Crepundia, a cultural project between Austenasia and Juclandia which functioned as a form of ceremonial embassy but did not have extraterritoriality or any official diplomatic status.

Countries in which are stationed Ambassadors of the Empire of Austenasia are shaded blue.

Ambassadors-at-Large are diplomats assigned to more than one sovereign state, nation, people, and/or organisation, or to deal with a specific foreign policy issue spanning several of such remits.

Envoys are diplomats assigned to a sovereign entity which is not recognised as a state (such as a sovereign nation) or to a non-sovereign ethnic, national, cultural, religious or linguistic people.

Austenasia has been a member of the Grand Unified Micronational (GUM) since 11 October 2009. It has since had # Delegates.