Trebizond is an Austenasian Crown Dependency bordering Turkey on all sides. It was established on 8 January 2020 after the landowner, HH Prince Dionisiy I, donated the territory to Austenasia. The territory is situated near Trabzon, a town which was known as Trapezous and later Trebizond in antiquity.

Before the city was founded as a Greek colony the area around it was dominated by Colchian and Chaldian tribes. One of the dominant groups to the east were the Laz, who were part of the monarchy of the Colchis, together with other related Kartvelians peoples. According to Greek sources the city was founded in 756 BCE as Tραπεζούς (Trapezous), by Milesian traders from Sinope. It was one of a number (about ten) of Milesian trading colonies along the shores of the Black Sea. Like most Greek colonies, the city was a small enclave of Greek life, and not an empire unto its own, in the later European sense of the word. As a colony Trapezous initially paid tribute to Sinope, but early banking (money-changing) activity is suggested occurring in the city already in the 4th century BCE, according to a silver drachma coin from Trapezus in the British Museum, London. Cyrus the Great added the city to the Achaemenid Empire, and was possibly the first ruler to consolidate the eastern Black Sea region into a single political entity (a satrapy).

Up until the conquests of Alexander the Great the area remained under the dominion of the Achaemenids. While the Pontus was not directly affected by the war, its cities gained independence as a result of it. Local ruling families continued to claim partial Persian heritage, and Persian culture had some lasting influence on the city. In the 2nd century BCE the city with its natural harbours was added to the Kingdom of Pontus by Pharnaces I.

After the defeat of Mithridates in 66 BCE the city was first handed to the Galatians, but it was soon returned to the grandson of Mithradates, and subsequently became part of the new client Kingdom of Pontus. When the kingdom was finally annexed to the Roman province of Galatia two centuries later. The city received the status of civitas libera, extending it judicial autonomy and the right to mint its own coin. Trebizond was greatly affected by two events over the following centuries: in the civil war between Septimius Severus and Pescennius Niger, the city suffered for its support of the latter, and in 257 the city was pillaged by the Goths.

Although Trebizond was rebuilt after being pillaged by the Goths in 257 and the Persians in 258, the city did not soon recover. Only in the reign of Diocletian appears an inscription alluding to the restoration of the city; Christianity had reached Trebizond by the third century, for during the reign of Diocletian occurred the martyrdom of Eugenius and his associates Candidius, Valerian, and Aquila. Early Christians sought refuge in the Pontic Mountains south of the city, where they established Vazelon Monastery in 270 AD and Sumela Monastery in 386 AD. As early as the First Council of Nicea, Trebizond had its own bishop. 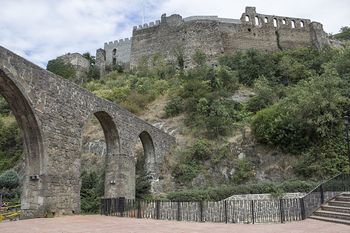 Ruins of the City walls and the Aquaduct of Byzantine Trebizonde

By the time of Justinian, the city served as an important base in his Persian Wars. Trebizond also benefited when the trade route regained importance in the 8th to 10th centuries; According to the 10th century Arab geographers it was regarded as being largely a Lazian port. The Italian maritime republics such as the Republic of Venice and in particular the Republic of Genoa were active in the Black Sea trade for centuries, using Trabzon as an important seaport for trading goods between Europe and Asia. Following the Byzantine defeat at the Battle of Manzikert in 1071, Trebizond came under Seljuk rule. This rule proved transient when an expert soldier and local aristocrat, Theodore Gabras took control of the city from the Turkish invaders, and regarded Trebizond, "as a prize which had fallen to his own lot" and ruled it as his own kingdom. Although he was killed by the Turks in 1098, other members of his family continued his de facto independent rule into the next century.

The "Empire of Trebizond" was formed after Georgian expedition commanded by Alexios Komnenos a few weeks before the sack of Constantinople. Byzantine authors, such as Pachymeres, and to some extent Trapezundines such as Lazaropoulos and Bessarion however, regarded the Trebizond Empire as being no more than a Lazian border state. Thus from the point of view of the Byzantine writers connected with the Lascaris and later with the Palaiologos, the rulers of Trebizond were not emperors. Geographically, the Empire of Trebizond consisted of little more than a narrow strip along the southern coast of the Black Sea.

The city also played a role in the early Renaissance; The western takeover of Constantinople, which formalized Trebizond's political independence, also led Byzantine intellectuals to seek refuge in the city. Especially Alexios II and his grandson Alexios III were patrons of the arts and sciences. After the great city fire of 1310, the ruined university was reestablished. The Black Death arrived at the city late 1346, probably via Kaffa. At that time the local aristocracy was engaged in the Trapezuntine Civil War. Constantinople remained the Byzantine capital until it was conquered by the Ottoman Sultan Mehmed II in 1453, who also conquered Trebizond eight years later, in 1461.

The last Monarch of an independent Trebizond, surrendered the city to Sultan Mehmed II in 1461. Following this takeover, Mehmed II sent many Turkish settlers into the area, but the old ethnic Greek, Laz and Armenian communities remained. Trabzon was the capital of the Ottoman Eyalet of Trebizond (1598–1867) and later of the Ottoman Vilayet of Trebizond (1867–1923) in the northeastern part of Anatolia.

Trabzon had a wealthy merchant class during the late Ottoman period, and the local Christian minority had a substantial influence in terms of culture, economy and politics. A number of European consulates were opened in the city due to its importance in regional trade and commerce. In the first half of the 19th century, Trabzon even became the main port for Persian exports. However, the opening of the Suez Canal greatly diminished the international trading position of the city. In the last decades of the 19th century, the city saw some demographic changes. Many residents from the wider region (mostly Christians, but also some Jews and Greek or Turkish speaking Muslims) started to migrate to the Crimea and southern Ukraine, in search for farmland or employment in one of the booming cities along the northern and eastern coasts of the Black Sea. Next to Constantinople, Smyrna and Selanik, Trabzon was one of the cities where western cultural and technological innovations were first introduced to the Ottoman Empire.

During the Turkish War of Independence several Christian Pontic Greek communities in the Trebizond vilajet rebelled against the new army of Mustafa Kemal (notably in Bafra and Santa), but when nationalist Greeks came to Trabzon to proclaim revolution, they were not received with open arms by the local Pontic Greek population of the city. At the same time the Muslim population of the city, remembering their protection under Greek mayor Crhysantos, protested the arrest of prominent Christians.

After having been a territory of the Republic of Turkey for about 100 years, the territory constituting the Crown Dependency of Trebizond was finally annexed by Austenasia after having been granted permission to do so by her landowner HH Prince Dionisiy I.

Trebizond is governed by HH Prince Dionisiy I as the Despot (despótēs) of Trebizond. Because of the Despot not living closely the landclaims, the territory is administered by his deputy the Mesazon, currently Nino Yerlitaş. Trebizond is governed as a Austenasian Crown Dependency, being neither taxed nor having representation in Parliament, with the Emperor holding absolute power (exercised by the Despot) over the Crown Dependency, and Austenasian legislation not applying to Trebizond unless it explicitly refers to it.

Trebizond is de facto ruled by decree by her Despot.