Lord John Gordon, Viscount of Thetford CCW is a former Prime Minister and the incumbent Representative of Palasia in the Empire of Austenasia, and has held several governmental positions in the Empire since he joined in 2013.

On 1 July 2013, John Gordon contacted Emperor Jonathan I about the possibility of Palasia (see below) joining the Empire of Austenasia. After negotiations, Palasia - which was deemed to consist of Gordon's family home - was annexed as an Austenasian Town on 12 July 2013, with Gordon appointed the new town's Acting Representative as Lord John Gordon, Baron of Palasia. 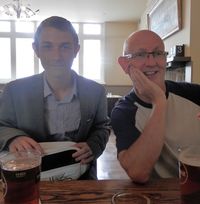 Lord John Gordon with HIH Emperor Father Terry during the former's visit to Carshalton in July 2015.

Despite only being Acting Representative, Lord John stood for election to the office of Prime Minister in the November 2013 elections. Although he lost the general election to Countess Eritoshi with only 33.33% of the vote, he became Deputy Prime Minister as runner-up in the election, and on the local level was confirmed by vote as Representative of Palasia. Later that day, he was appointed Home Secretary by Jonathan I, a position he held until his resignation on the 13 May 2014.

Upon the foundation of the Privy Council of Austenasia in March 2014, Lord John was appointed as one of its first members; on 1 September 2018, his remit within the Council was at his request specified as Advisor on Scientific Research.

On 3 December 2014, Lord John arranged for the home of his grandparents to be annexed as the first Austenasian March with the name of Caldari. As a March of Palasia, Caldari is represented by Lord John in Parliament but is governed by its residents independently of Palasia Town Council.

On 9 February 2015, Lord John founded Palasian Left Unity, to advocate - amongst other policies - absolute monarchy and the legalization of marijuana. This party went through various changes of names before transferring its focus from Austenasian politics to Breckland on 12 May later that year.

On 14 July 2015, Lord John visited Wrythe, arriving at Morden tube station and being met by Emperor Jonathan I and Countess Eritoshi. Lord John was given a guided tour of the Carshalton Nations, being shown Orly, the original site of Rushymia, and the local area in general before arriving at Wrythe itself, where he also met Emperor Father Terry and Edd before the group went out for lunch.

After his initial election in November 2013, Lord John was consistently re-elected as Representative of Palasia in the October 2014, August 2015, and May 2016 local elections. Lord John was granted the peerage of Viscount of Thetford on 16 September 2017 in celebration of Independence Day, and on 5 February 2018 he was appointed Minister of Defence by Jonathan I, a post he held until July later that year. John also attended celebrations at the Imperial Residence in September 2018 to mark ten years since the foundation of Austenasia, and while there recorded audio for a cameo line in Cool Barbie XV. He served as one of the two Consuls in 2019.

Lord John stood for election in the February 2020 elections, and although re-elected locally as Representative of Palasia, he lost the general election to Prince Dionisiy, receiving 41% of the vote as opposed to the Prince's 52%. During the political crisis which broke out in May 2020, Lord John strongly supported the attempts of the Emperor to restore unity, and on the nomination of Prince Dionisiy, the Emperor appointed Lord John as the Deputy Prime Minister after Lord Edward Gunderson was removed from office. Three days later, Prince Dionisiy resigned.

Upon the resignation of Prince Dionisiy, Lord John would as Deputy Prime Minister ordinarily have become Acting Prime Minister. However, under the provisions of the emergency powers he had assumed, Emperor Jonathan I directly appointed Lord John to the position proper on 1 June, with the support of the House of Representatives and of the outgoing Prince Dionisiy. The House unanimously confirmed its support in a symbolic vote of confidence on 22 June.

As Prime Minister, Lord John oversaw a return to political unity and stability, a record-breaking growth in Austenasia's population and land claims, and a cultural flowering of heraldry and monuments, to the extent that the second half of 2020 was termed by some the "Austenasian Renaissance". He also nominated himself as Minister of Defence, overseeing a radical reorganisation of the Austenasian Armed Forces. Lord John put forward the ideas behind the Elections Act 2020, which aimed to establish fixed terms of four years for the Prime Minister, and a restriction on serving more than two consecutive terms. He also successfully proposed the creation of the Ministry of Territories and the Diaspora in January 2021, with a view to enabling greater political participation for non-residential subjects. By mid-2021, increasing pressure on Lord John's time from his role as a member of the British Army - together with the awareness that he had not been elected to the position - led to him feeling unable to continue as Prime Minister; he therefore called for an early general election, and announced that he would not run in it.

The September 2021 general election concluded with Lord William Wilson being elected Prime Minister as John's successor; as a former Prime Minister and Consul, John was appointed to the Austenasian Senate by Jonathan I later that day. Lord John remains Representative of Palasia, as well as a much-respected "elder statesman" of the nation, and was appointed Chief Inspector of the Austenasian Police on 23 July 2022.

Outside of Austenasia, John Gordon is best known for having created and maintained a large number of various different micronational projects, usually in succession to each other. Adam I, Emperor of Adammia is known to maintain a list of some notoriety of all of Gordon's micronations, which reportedly numbers 25 between November 2013 and May 2019.

His first micronational project was Sakasaria, which consisted of what is now Palasia and was founded on 25 August 2009 before being renamed Preissland in December 2010. Initially having close ties with Dorzhabad, Preissland briefly became Herculeum in November 2011 before transitioning into Firdanor. Firdanor then became Palasia in July 2012, and it was this entity which was annexed as an Austenasian Town a year later.

In mid-2011, John Gordon re-founded the micronation of Sakasaria with a different land base, which co-existed with Palasia and its predecessors until mid-2012. In January 2012, Gordon - representing Sakasaria - was elected Secretary-General of the Inter-Micronational Treaty Organization (IMTO), an organisation which had been strongly criticised by most members of the international community for its belligerence and lack of professionalism. After only four days in office, Gordon revealed that his election had been the result of a successful Sakasarian infiltration of the organisation, and declared it dissolved. Although the IMTO quickly re-assembled itself, Gordon's attempt at destroying it dealt the organisation a near-fatal blow, leading it to finally dissolve later that year.

After Palasia joined Austenasia, Gordon re-founded Sakasaria as Bysalia in August 2013. Bysalia transitioned into Breckland in April 2015, and between December 2017 and May 2019 used the name Sakasaria again. This nation was well-known not only for its changes of name, but also for the wide variety of governmental systems it has been administered under; since 13 June 2022, it has been known as the Iceni Empire.