The Austenasian Imperial Residence, also known as 1 Imperial Road, is the centre of government and residence of the Imperial Family of the Empire of Austenasia. Located in Wrythe, it houses the entirety of the Town's population, is the nominal meeting place of Parliament, and the official residence of the Emperor of Austenasia. The Imperial Residence borders Wrythe Public Park to the north-east and the United Kingdom on all other borders, and together with 2 Imperial Road comprises the Crown property of Imperial Wrythe. 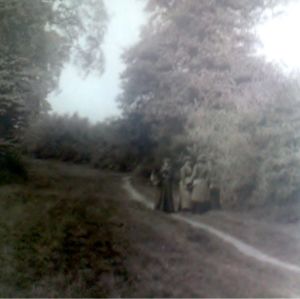 Green Wrythe Lane at some point in the first two decades of the 20th century.

The Imperial Residence is situated next to the British road of Green Wrythe Lane. This is a relatively modern name for a very old road which was once known as Cannon Sheephouse Lane, named after the sheepfolds of the canons of Merton Priory, who owned Carshalton parish church and its lands prior to the Reformation. It was also known at various times as Shaw Lane ("Shaw" meaning a small wooded area) and - in the mid-19th century - Smearley's Lane. The Smearleys were a family that owned and worked a nearby brickfield, which was built over in the 1930s. The lane was the main road from Carshalton to Merton, but was privately owned; after the dissolution of Merton Priory by Henry VIII, it fell into disrepair and by the start of the twentieth century was no more than a rural footpath often blocked by fallen trees (in 1784, William Smearly had brought Carshalton parish to court over failing to maintain the road, but they successfully contested the charge on the grounds of it not being a public road). However, the construction of the St. Helier Estate in the late 1920s resulted in it being taken over by the local authorities and turned into the main road it is today.

In 1804, the land where the Imperial Residence now stands was part of an open field bordering a cottage, known by 1866 as Hays Cottage. This building had a well and a garden, and was still standing in 1895. In 1847, Hays Cottage was owned by Wandsworth Poor Overseers, and occupied by a Charles Sprules. The field which existed where the Imperial Residence and the neighbouring British houses now stand was a parcel of arable land named Smearley's Birch Field, owned by a John Blake but farmed by a William Sprules, probably a son or brother of Charles. A large birch tree (Betula pendula) currently grows in a garden three houses north from the Imperial Residence, likely a descendant of the trees after which the field was named. In 1910 and 1932 maps, there remains a square on the maps but it is no longer marked - it may have become ruined or derelict, or perhaps was simply no longer considered important enough to warrant its own label.

Whatever remained of Hays Cottage, it was demolished in the 1930s to make way for the building of new houses. Construction on what is now the Imperial Residence - part of a small terrace of six houses built on what was once Smearley's Birch Field - was completed by 1935, when it was inhabited by the Hyder family, who lived there until 1957. The house was briefly inhabited by the Hamilton family for two to three years, then from 1960 onwards by the Boardman family. By 1995 at the latest, the house was inhabited by the Holdaways. It is known that the house was "rewired completely" in May 1974.

On 8 January 2004, the property was sold to Terry and Margaret Austen, who moved into the house with their children Jonathan and Caroline. The family looked after a rescued greyhound-saluki crossbreed, Joe, for a week in 2005, but otherwise did not have any pets other than fish until September 2006, when they bought Rose, a bullmastiff. She was joined in March 2009 by her sixth cousin, Edd.

The Second Boys vs Girls War took place in the now Imperial Residence on 20 August 2005. During a party to which some members of the Midget Army had been invited, a small conflict broke out, with the Midget soldiers against the now Crown Princess Caroline and one of her friends. The conflict ended in what was effectively a stalemate, due to uncharacteristically lax Midget disciple and Terry telling the two sides to stop fighting.

On 20 September 2008, the property was declared independent from the United Kingdom by the Austen family, as the Empire of Austenasia. The entire property was designated Wrythe, whereas the house itself (including the front drive and back patio, but not the garden or garage) became known as the Imperial Residence.

The Imperial Residence came under attack on 25 May 2009 by some Britons who had infiltrated the house with the help of the then Princess Caroline, leading to the Skirmish of the Treasury, which was won by the Austenasian Army. It was also used to keep the Princess under low-security house arrest during the Austenasian Civil War.

The Imperial Residence consists of a three-bedroomed house, its front drive, and an adjoining patio to the north-east which borders Wrythe Public Park. The property was measured by the Imperial Geographical Society on 25 August 2014 and found to be 990 square feet. The term "Imperial Residence" is usually used to refer specifically to the house itself, which contains eight rooms:

Parliament Hall is the largest room in the Imperial Residence, primarily used for dining and social activities. On the ground floor, it derives its name from the meetings of Parliament which took place there between September 2008 and April 2009, when the then Crown Prince Jonathan and Emperor Terry I were the only members of the legislature. It is still the nominal meeting place of Parliament.

Bullmastiff Hall, on the ground floor, is a room which derives its name from being where Rose and Edd sleep. It is also partially used for storage.

The Imperial Kitchen, on the ground floor, is used for the preparation of meals for the Imperial Family and visiting guests.

The Imperial Quarters (known as the Prime Minister's Office before the ascension of Jonathan I to the Throne), on the first floor, is the official residence of the Emperor of Austenasia and his functioning office. It serves as the very heart of the administration of the Austenasian government, and is considered to have been the overall seat of power in the Empire both before March 2010 and since January 2013.

Quarters of the Emperor's Parents

Known as the Imperial Quarters before the abdication of Terry I and the Quarters of Sir Terry and Lady Margaret between then and the accession of Jonathan I, this room is the largest on the first floor.

This room is the second-smallest on the first floor.

This room is the smallest on the first floor. Its functions are in accordance with its name.

This room is comprised of the loft space in the roof of the house. It is used for storage, although there have been some plans to have it converted into a study or guest room.