Rose (17 June 2006 - 24 April 2014), whose pedigree name was Bramarley Paloma of Carothan, was a bullmastiff owned and loved by the Austenasian Imperial Family, who lived with them in the Imperial Residence. Born in Milton Keynes and bought from there by the future Emperor Terry in September 2006, she was joined in March 2009 by Edd, another bullmastiff (her 4th cousin once removed).

Rose was appointed Mascot of the Order of the Bullmastiff in January 2009, a position which made her practically the embodiment of Austenasia's national animal. The bullmastiff was chosen as the Empire's national animal by suggestion of the then Emperor Terry I in honour of Rose.

Rose had one litter from Shadowguard Maximus, her nephew. Tragically, only one puppy of the four that she had survived, "Lily" Carothan Lilly of the Water.

Rose died on 24 April 2014 after suffering from lung cancer, the last surviving dog from the Bramarley kennel. An urn containing her ashes was buried in Wrythe Pet Cemetery on 1 June later that year.

Rose was DNA profiled on 22 October 2007, and had a hipscore of 11:11, or 22. The Carothan affix was granted in January 2007, it being a combination of the names of the now Emperor Jonathan I and Crown Princess Caroline of Austenasia. Rose qualified for Crufts 2008 and 2010.

Rose was appointed Mascot of the Order of the Bullmastiff, a life-held position, on 3 January 2009 upon the Order's founding. The Order had been founded in honour of Rose at the suggestion of Terry I, and as such, Rose functioned in many respects as the embodiment or archetype of the Empire's national animal, the bullmastiff.

Living in the Imperial Residence, over the course of her life Rose met the following dignitaries on their visits to Wrythe (this list does not include members of the wider Imperial Family):

Rose also played herself in the Austenasian Television Productions (ATP) sci-fi series Cool Barbie, appearing as one of the Protectors of the Realm in 2009's Cool Barbie IV - The Uprising (having previously appeared in the original (non-ATP) version of Cool Barbie 3 in 2008).

Rose qualified in April 2008 to become a Pets as Therapy, or PAT dog - a very rare achievement for a bullmastiff. An article was written in Dog World later that month, welcoming her to the organisation:

I welcome the latest addition to the Bullmastiff members of the Pets As Therapy team. The Austens' Bramarley Paloma of Carothan has just passed her assessment test to be accepted as a PAT dog much to her owner’s delight. Not every dog has the ability to be a show dog but every real Bullmastiff should have the temperament to socialise with people, after all they were bred to work closely with humans. I hope that more people will find the time to become involved in this simple but effective scheme. Having owned two PAT dogs myself I am very aware of the importance of their visits to old people’s homes, hospital wards and schools. To see someone who no longer communicates with others becoming animated and talking non-stop to a Bullmastiff is a very moving experience. The fact that no-one else could understand what she was saying did not matter because the dog knew. Bullmastiffs are ideally suited to the scheme because they are big enough to be patted without anyone having to bend down from a bed or a chair and they do have such expressive faces, looking as if they are joining in conversations. The only problem I ever had was in retirement homes when, despite all my requests, biscuits were slipped unobtrusively into large mouths.

Rose visited a Purley residential home for the elderly people in her capacity as a PAT dog several times over 2008 and 2009.

On 20 May 2010 it was confirmed by a scan that Rose was pregnant by Shadowguard Maximus, a bullmastiff that she had attempted to breed with in late April. Shadowguard Maximus ("Beau") is the son of Bramarley Paxton ("Percy"), Rose's brother; inbreeding by dogs is rather common, as in the wild they would have lived in packs with a relatively small genepool.

Rose was expected to give birth on 24 June 2010 with at least six puppies, but actually went into labour three days later. After one still-birth (which was buried in Wrythe Pet Cemetery) Rose was taken to an emergency vet in Wimbledon, where after undergoing a caesarian it was found she had only been pregnant with four puppies, two more of which tragically died and were cremated at the vets. Only one (the sole female) puppy survived, Carothan Lilly of the Water, who was sold to a family living in the United Kingdom, and who was visited by the Imperial Family on 31 October 2010 and 4 June 2011. 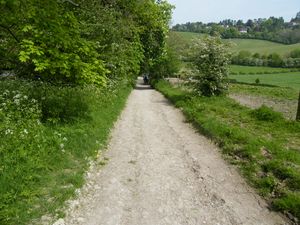 Paloma Path, a footpath in Woldingham named after Rose's pedigree name during an IGS expedition in the month after her death. 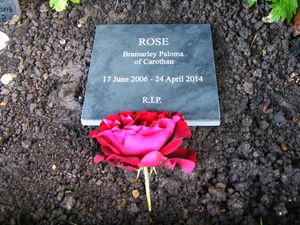 The plot in Wrythe Pet Cemetery where an urn containing Rose's ashes is buried.

Concern was raised in March 2013 when a swelling was discovered on one of Rose's mammary glands, with fear that it may be cancer, but this was fortunately discovered to be a mere infection, which soon healed. By late 2013, it was noted that Rose was becoming slightly hard of hearing as she began to near the life expectancy for a bullmastiff; larger breeds such as bullmastiffs have a human-dog year ratio of roughly 1:10, meaning that if Rose were a human she would have been in her mid-70s.

More fears for Rose's health arose in April 2014, when it was noted that she was showing signs of extreme thirst. Although blood and urine tests showed nothing amiss, a scan taken after she began to have difficulty breathing revealed an inoperable tumour in her lungs. With her condition rapidly deteriorating, the difficult decision was made to put her to sleep on 24 April, at a veterinarian surgery in Carshalton.

Rose was cremated, with an urn containing her ashes being collected on 13 May and personally escorted to Wrythe by the Emperor. The urn was placed on a table in Bullmastiff Hall, surrounded by flowers and toys which had been enjoyed by Rose, as a sort of lying in state. On 1 June, the urn was buried in Wrythe Pet Cemetery during a short ceremony which was attended by the immediate Imperial Family.

In May 2014, a footpath in Woldingham was named in Rose's honour by an expedition of the Imperial Geographical Society. She also received a posthumous Weimar Service Award in 2019.

Rose was frequently shown at various dog shows throughout 2007-9, qualifying to be shown at the 2008 and 2010 Crufts shows. After that, she went into a happy retirement from showing; it had been planned for her to enter a veterans-class show in mid-2014, but this was prevented by her death.

The Mascot of the Order of the Bullmastiff was, prior to April 2016, required to be descended from Champion Ambassador of Buttonoak. Rose was descended from him thus:

Rose was descended from the Oldwell kennel of bullmastiffs, a well-known kennel of Champions.