Wrythe Pet Cemetery is a graveyard located on the southern side of Wrythe Public Park, in Wrythe, the capital of Austenasia. The Empire's first official national monument, the cemetery was formally created in late 2008 by order of Emperor Terry I, and is for the burial of deceased pets of the Imperial Family and other Austenasians. Flowers are placed on each grave every Pets Day (17 May) and on the yearly anniversary of death of the respective burial. 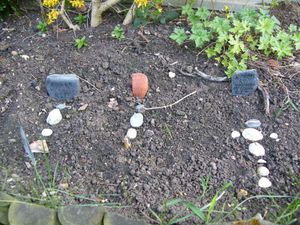 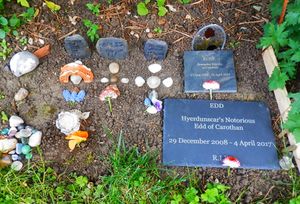 Wrythe Pet Cemetery the year prior to its current, enlarged state. Photograph taken 17 May 2020.

At the time of the founding of Austenasia, three graves of deceased goldfish (one a joint burial with a crab) were scattered around the garden which became Wrythe Public Park. Emperor Terry I was given stewardship over Wrythe Public Park by Wrythe Town Council in late 2008, and he ordered that the three graves be brought together to form a single cemetery. This was done, two of the coffins being unearthed and reburied adjacent to the third, with the headstones and the shells and stones decorating the ground above the graves cleaned and also translated to the new site.

The graves often fell into disrepair and were periodically repaired. Since the first celebration of Pets Day in 2010, the Cemetery is now fully repaired and the decorations cleaned every May, while minor repairs such as the removal of fallen leaves are carried out as and when required. After the burial of Alpha Primus (still-born puppy of Rose) in June 2010, a fox periodically attempted to unearth his coffin until the autumn of 2011, and as a deterrant against this a metal grate was sometimes placed over the cemetery. The Cemetery was sprinkled with holy water on 1 July 2012, blessing it as consecrated ground for burial.

On 17 May 2013, renovations to the Cemetery took place in order to free up room for a prospective future memorial to or burial of the ashes of Rose or Edd.

Space has been made by translating two of the coffins, those of fishes Daah and Flower, into the grave of goldfish Lovehearty II, reburying all three coffins inside a larger box. The coffin of bullmastiff Alpha Primus and the already shared coffin of crab Rodney and goldfish Woo-Woo were also reburied, translated closer together so as to make room for future burials. The Emperor stated that while it was “unfortunate that we had to actually move the coffins, this was done with the utmost respect. All the pets are now reburied, with their graves decorated by shiny shells and freshly picked flowers."

The free space made in May 2013 was required a year later when Rose died from cancer. Her ashes were buried in the Cemetery on 1 June 2014 after a short ceremony attended by the immediate Imperial Family. The Cemetery was then full until February 2017, when wooden posts nearby were removed after rotting at the base. This new room was used for the burial of Edd's ashes later that year.

On 13 December 2017, the day after the passage of the Monuments and Heritage Act 2017, Emperor Jonathan I announced plans to designate the cemetery as a national monument, pending the creation of and agreement upon a charter specifying the steps to be taken for its preservation and maintenance. This took place the following year, with a charter agreed upon on 30 April 2018 designating the cemetery as Austenasia's first official national monument.

The cemetery was enlarged on 13 May 2021, with space for two to three future burials. Additional decorations and border markers were also installed.