The Imperial Family should not be confused either with the Line of Succession or the House of Austen. The Imperial Family is a legally defined grouping of the closest relations of the Monarch; the Line of Succession consists of all those possibly eligible to inherit the Throne upon the death or abdication of the Monarch; and the House of Austen is the dynastic house to which the current Emperor belongs. These three groups therefore overlap to an extent, but are also all distinct.[1]

Since 20 September 2011, the Austenasian Constitution of 2011 has defined the Imperial Family as "The Monarch, his/her descendants and siblings and their descendants, his/her living ancestors, and all of their spouses" (Article IV, Section B, Paragraph A).

As of 5 November 2022, therefore, the Imperial Family consists of:

The composition of the "Royal Family" (as it was then known) was first defined by Act 8 (Titles) in October 2008, a month after Austenasia declared independence, as the spouse, siblings, and children of the Monarch. Another law, passed on 20 December later that year (Act 34, Law 11), added the parents of the Monarch while also excluding any abdicated former Monarch. The Royal Family was renamed to the Imperial Family on 10 January 2009, by Act 47.

The Imperial Family during the reign of Terry I therefore consisted of:

With the ascension to the Throne of Esmond III, Austenasia had an Emperor unrelated to his predecessor. Law 11 of Act 113 - the legislation which brought Esmond III to the Throne - specified that the Line of Succession would remain untouched, and that all in it would retain their titles, as if Terry I were still Emperor. No legislation altered the definition of the Imperial Family, meaning that the relatives of Esmond III legally became the Imperial Family during his reign. However, none of his relatives ever played a public role in Austenasian society, and none were ever openly referred to as holding an imperial title. The Imperial Family as it had existed during the reign of Terry I continued to be referred to as such both popularly and via official channels, and so remained as such de facto despite losing the legal basis for this status.

On 19 December 2010, Declan I became joint Emperor. Unlike the family of Esmond III, the family of Declan I were explicitly granted titles as relatives of a Monarch by the legislation which brought him to the throne; however, they were not explicitly referred to as members of the Imperial Family.[3]

With the entering into effect of the Austenasian Constitution of 2011 on 20 September that year (and the simultaneous removal of Esmond III as co-Emperor), the current definition of the Imperial Family (see above) was adopted. Additionally, an important clarification was made by a clause[4] of the new Constitution: along with a reaffirmation that the Throne would revert to the heirs of Terry I upon the end of the reign of Declan I, it was also explicitly stated that the Imperial Family was comprised as if the former were still on the Throne instead of the latter.

Reign of Jonathan I (prior to marriage) 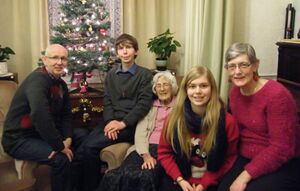 Upon the abdication of Declan I on 20 January 2013, Crown Prince Jonathan ascended the Throne as the incumbent Emperor Jonathan I, with his sister Caroline becoming Crown Princess as heir presumptive. In addition to changes in titulature, the sisters (and their husbands) of Terry I now no longer fell under the defining criteria of members of the Imperial Family proper, whereas Emperor Grandmother Joyce was added to the group as a direct ancestor of the reigning Monarch.

Upon the ascension to the Throne of Jonathan I, therefore, the Imperial Family consisted of: