All of those in the Line of Succession to the Throne of Austenasia are members of the House of Austen or are related to it through blood or marriage. 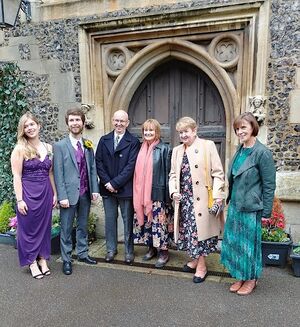 The House of Austen, November 2022

The specifically Austenasian branch of the House consists of all those who are descended in the male line from David Austen (1900-1983), great-grandfather of the incumbent Emperor Jonathan I. There are also two "British branches" of the House of Austen descended from brothers of David.

There are currently six living members (underlined) of the Austenasian Imperial House of Austen proper:

Bold - Born into the House of Austen
† - Deceased

The earliest known Austen to be a direct ancestor of Emperor Father Terry is his great-x18 grandfather, a man known only by the name of Astyn (1340 - 1374), who held lands in the Benenden area of Kent. The patrilineal descent from Astyn to the Emperor Father goes thus:

Through the mother of John Austen (b. 1716), the House of Austen holds an extremely prestigious ancestry, descended via European nobility from the Carolingians, House of Wessex, House of Normandy, Robertians, and Gallo-Roman senatorial families. A line of descent is able to be traced through Spanish nobility to the Kings of the Visigoths, and through them to the Constantinian, Valentinian and Theodosian dynasties. The House of Austen is furthermore descended from the Macedonian and Amorian dynasties through French nobility. It is through their descent from said "Byzantine" (medieval Roman) dynasties that the Austens are able to claim a descent from antiquity via the Armenian dynasties of the Mamikonians and Arsacids from the Achaemenids, Ptolemies, Seleucids, Argeads, and Orontids.

The Austenasian Imperial Family is also related to the famous English novelist Jane Austen (and her brothers Francis and Charles, respectively Admiral of the Fleet and rear-admiral in the British Royal Navy) - her great-grandfather John Austen (1629 - 1705) was another son of Terry's great-x10 grandfather Robert Austen (1594 - 1688) and so she is the fourth cousin seven times removed of the Emperor Father.

Upon the abdication of Jonathan II on 31 July 2006, the title passed to his sister, the now Crown Princess Caroline. Although the Midget Empire fell during her reign, she founded the Midget Nation-in-Exile after a period of nominal rule. She abdicated on 4 February 2010 and passed the throne out of the family, to Midget Fuhrer Thomas IV. The title of Midget Master has since returned to the House of Austen, having been united with the Throne of Austenasia in April 2011.

While Midget Master Caroline III was still going through her period of purely nominal rule over the Midget Empire, her father Terry was declared Emperor of Austenasia when his immediate family sent a Declaration of Independence for their house, founding the Empire of Austenasia on 20 September 2008. The reign of Terry I continued for nearly one and a half years before he abdicated on 16 February 2010. The Throne passed to his son, Crown Prince Jonathan, but he refused to become Monarch so that he could retain his office of Prime Minister. The Throne therefore passed to Esmond III, a friend of the Crown Prince un-related to the House of Austen, who had been made second in line to the Throne by an Act of Parliament. Esmond III was succeeded by Declan I, who was made joint Monarch by an Act of Parliament in December 2010, with Esmond III removed as Emperor in September 2011.

The heirs of Terry I remained in the Line of Succession to the Throne under Austenasian law, however, and his son ascended to the Throne as Emperor Jonathan I on 20 January 2013 after Declan I abdicated, returning the Empire to the rule of the House of Austen. As well as also returning the position of Midget Master to the House of Austen (see above), the titles Shahanshah of the Carshalton Realms and King of Rushymia were also assumed, the former being assumed by Declan I in May 2012 in his capacity as Emperor of Austenasia, and the latter being united with the Austenasian Throne in October 2010.

On 19 October 2010, the then Crown Prince Jonathan of Austenasia was appointed co-King of Moylurg by King Declan I, to rule alongside him. When Moylurg reformed into the Kingdom of Wilcsland on 10 November 2010, the Wilcslandian people decided to depose Jonathan from the throne as part of the changes the nation was going through, and King Declan instead appointed him Duke of Atlantos.

On 12 November 2010, the Emperor deposed King Calum I of the Grove and abolished the throne of the Kingdom of the Grove, replacing it with a Lord Regency. The Emperor appointed the then Crown Prince Jonathan to be Lord Regent of the Grove, with all the absolute powers of the King, merely without the title of rex.

On 8 December, Jonathan abdicated from this title. As he had not designated a successor, the King of Copan assumed the throne as Regent.

The then Crown Prince Jonathan was appointed Prince of Domanglia (as Prince Darkomere of the House of Kaiser (the House of Kaiser being the Domanglian name for the House of Austen)) by a group of Domanglian oligarchs as a part of Domanglia's transition from the Over-Lorrokha Republic to the Princely Union of Saint Edward and Domanglia on 21 November 2012. This was intended to be a Theodorist state, but chronic inactivity amongst the members of the Domanglian legislature (Landtag) prevented any reforms being carried out, with its members not voting on a single piece of legislation or business proposed by the Prince. Founder of Domanglia, Dominic C., stated a few weeks later that he had changed his mind about wanting to implement Theodorism, and (after legislators made a formal request for his abdication) the Prince abdicated on 12 December, leaving the throne to Dominic. On 8 January 2019 Jonathan was awarded with a Comradeship of the Principality of Domanglia (CPD) in recognition of his role as former Domanglian monarch.

Upon the abdication of Declan I from the Austenasian Throne, the Confederation of Saint Luke and Amager announced that he had also abdicated from his office of Steward of Amager, an entirely ceremonial monarchical office, with the two having been seen as having been in real union. Emperor Jonathan I thus also acceeded to the ceremonial Amagerian throne on 20 January 2013, but the position was abolished the following month on 15 February and transitioned into a subnational monarchy for Amager's capital, Hobartstown and Victoria. Amager dissolved in April 2013 and was succeeded by a state named Hobartstown and Victoria, with the subnational monarchy being maintained in Hobartstown alone.