Sir James Stewart B.P. OBS IKA ACCL KNVI KCSM (formerly His Grace James I, Grand Duke of Francisville) is a Scottish micronationist, currently a New Virginian statesman and most notably associated with the former state of Francisville. The founder of the Democratic Duchy of Francisville in 2008, he reigned as the Grand Duke from the establishment of the nation until the abolition of the monarchy by his own initiative on 3 June 2011. Due to his participation in intermicronational politics during the early days of the Grand Unified Micronational, he has become regarded as one of the principal architects of the early MicroWiki Community along with Alexander Reinhardt of St.Charlie, Jacob Tierney of Renasia, and James von Puchow of Landashir. He served two terms as the Supreme Tribune of the organisation and became elected Chair of the Quorum of Delegates during the time of the Rhodesian and New Euro-Erusian conflicts. His diplomatic efforts established Francisville as a prominent neutral power.

In Francillian domestic politics, he has been praised as a constitutional theorist and the founding father of the Federal Republic of Francisville due to his position as the intellectual founder of the June Convention. His micronational activity decreased following the disestablishment of Francisville in 2014. He subsequently returned to the MicroWiki community in early 2020 as a citizen of New Virginia. He currently serves as First Ambassador, ambassador and principal delegate to the GUM, and Speaker of the House of Burgesses.

Stewart was born in Inverness in the Scottish Highlands in 1993. He spent most of his early life in Kirkburgh. Stewart developed an early interest in political theory and the history of political reform, citing numerous early influences on his political outlook including the democratizing tendencies of the Scottish Enlightenment and the effects of land movement.

Stewart became familiar with micronationalism whilst he was completing his secondary education, when he was exposed to nations such as Molossia and Flandrensis. Following discussion with other interested individuals, he drafted and promulgated a provisional constitution for the Democratic Duchy of Francisville on 28 November 2008. Under Emergency Clause I.VII, the constitution established a powerful elected monarchy under the administration of the Archduke of Francisville.[1] Amendments adopted on 16 January 2009 transferred the duties of the monarch to the Grand Duke of Francisville who was provisionally held to account by initiatives of direct democracy.[2] On 8 May 2009, Stewart proposed the adoption of a revised constitution which transformed the state into a constitutional monarchy, allowing for the election of the first legislature on 3 June 2009.[3] The May 2009 constitution also permitted the establishment of territorial land claims for the first time in the nation's history.[4] Stewart has noted:

The Duchy established two territorial regions in 2009 which provided physical locations for the nation's activities. In line with Francisville's guiding view on micronational sovereignty, the territorial claims were not considered essential to the nation's existence and they were frequently altered. Acting as Francisville's primary intermicronational representative in his role as Grand Duke, Stewart is credited with establishing Francisville's reputation as a neutral power with a commitment to diplomacy and co-operation. His signature was legally required for any international treaty and he negotiated agreements with numerous states including St.Charlie and Flandrensis.[5] He also visited the Community of Landashir in 2010 on a state visit hosted by James von Puchow.

Chair of the Grand Unified Micronational, 2009

Francisville was admitted to the Grand Unified Micronational on 8 January 2009 as one of the first members of the organisation other than the constitutionally recognised founding member states. From 13 February until 13 April, Francisville served on the first GUM Security Council along with Scientopia and the Ohio Empire. The credentials of Francisville as a neutral power were first bolstered by its involvement in peace talks during the Meissner-Antifan War when Stewart also served as a juror on the Special Tribunal to Investigate Allegations of New European Racism. His judicial efforts contributed to his election as Supreme Tribune of the Justice Commission with his election backed by Robert Lethler and Alexander Reinhardt. Serving in this office from 13 April - 13 July 2009, he presided over the trial of Scientopia for inappropriate release of New Europe's secure information.

As the international representative of Francisville to the Quorum of Delegates, he was considered responsible for Francisville's heavy involvement in the early days of the organisation. He successfully maintained the nation's constitutional neutrality during the Siple War and New Euro-Erusian War. He was elected as 3rd Chairman of the Quorum of Delegates on 13 July 2009. His chairmanship was marked by the outbreak of the Rhodesian War which led to the demise of the United Micronations (UNMCN) and the hegemony of the GUM over the MicroWiki community. Stewart withdrew Francisville from the UNMCN and acted as a principle negotiator during the conflict, signing the peace agreement along with Robert Lethler on 2 August 2009. He was later a signatory to the Treaty of Universal Non-Aggression at the close of the New Euro-Erusian War.

Stewart's chairmanship was noted for his successful diplomatic efforts which marked the end of the transition between the Conflict Era and the Peaceful Era. Despite this, he later expressed concerns about his complicity in establishing the power of Robert Lethler over intermicronational affairs.[6] He has also criticized figures who have justified Lethler's influence. His chairmanship had been assisted by Alexander Reinhardt as Vice-Chairman who was removed from office on 27 August 2009 in response to the Observergate scandal, which was later revealed as an experiment contrived by Lethler. A similar incident occurred with the scandal surrounding the return of Peter I of Erusia after which Stewart proposed his resignation from the office of chair. In response to defense of Lethler, he has responded that these events were unjustified interventions which diverted the community's attention from productive projects and encouraged intermicronational conflict. His term as chairman ended on 13 October 2009 after serving a term of 92 days.

He served a second term as Supreme Tribune from 13 October 2009 until 13 January 2010. The end of his term marked the gradual decrease of Francisville's involvement in the GUM. The nation ceased to hold any position within the organisation after this date although Stewart continued to comment on its political affairs.[7] Stewart's desire to draw Francisville away from Erusia's influence was considered as the primary motivation behind this decision. Francisville later remained temporarily outside of the MicroWiki Community until the exposure of Robert Lethler in July 2010.

In additional to his role as the founder of Francisville, Stewart's legacy is characterized by his role as a constitutional reformer and the founder of the June Convention. He released a statement in 2011 calling for the abolition of the monarchy and the establishment of a constitutional convention to develop an alternative democratic form of government.[8] After the declaration, he became a prominent figure in the convention and he pushed constitutional proposals which emphasized direct democracy, decentralization, and workers' self-management. He succesfully proposed a constitutional amendment which limited legal personality to co-operatives and mutual organisation thereby abolishing the concept of the private corporation in Francisville.[9] The proposal was unanimously accepted by the electorate making it the most popular proposal in the nation's history.

He represented Francisville to the European Micronational Culture Organisation and Germanophony but he developed a skeptical position on intermicronational organisations as his career developed. On 23 April 2012, he proposed a referendum which ended Francisville's Permanent Observer of status of the Grand Unified Micronational, a status the nation had held since the re-restablishment of the GUM in August 2011. 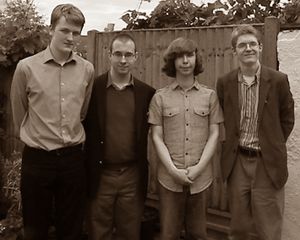 James Stewart (far right) during a state visit to Austenasia

His constitutional proposals also introduced the requirement of a referendum for membership in any intermicronational organisations.[10] Despite his lack of activity in the MicroWiki community during the time, he actively opposed the ban of Sebastian Linden (then known as Mark Dresner). He was one of few prominent micronationalists in the community to oppose the ban, along with the now Jonathan I of Austenasia and Marka Mejakhansk of Nemkhavia.

Stewart represented Francisville at PoliNation: 2nd International Conference on Micronations where he delivered a presentation focusing on Francisville's constitutional reforms.[11] He was again hosted by James von Puchow with whom he visited Landashir and North Llabdey.[12] The conference was followed by a state visit to Austenasia organised by Crown Prince Jonathan which Stewart attended with James von Puchow of Landashir and Will Sörgel of Sandus.[13] Despite his distrust of intermicronational organisations, he agreed to act as the temporary Juclandian delegate to the GUM during a post-conference quorum. He later dined with Jacob Tierney of Renasia along with Alexander Reinhardt and James Lunam of St.Charlie where the parties discussed topical issues such as the Lethler controversy and Scottish independence.

Stewart had not occupied a permanent position in micronational governance since the dissolution of Francisville in November 2014. He remained an active observer within the micronational community, however, and maintains contact with several former and current members of the MicroWiki sphere including Alexander Reinhardt, James von Puchow, Gaius Soergel Publicola, Jacob Tierney, and Sebastian Linden. In November 2017, he founded Historic Francisville with the aim of preserving and promoting the history and legacy of the nation. Stewart is a citizen of Flandrensis and New Virginia as well as being an Honorary Subject of Austenasia. He was appointed New Virginian delegate to the Grand Unified Micronational on 29 May 2020. He has also served as the Consul-General in Scotland for the Empire of Austenasia since 7 February 2020. On 25 May 2020, he became a citizen of the Commonwealth of New Virginia by order of the Provisional Council. He was subsequently appointed as the Commonwealth's ambassador and delegate to the Grand Unified Micronational.[14]

Stewart stood in the 2020 election to the House of Burgesses for Roanoke-at-Large, being affiliated to the Free Democratic Party. He was successfully elected as one of two FDP candidates, alongside Chloe Chloris, with 27.4% of the vote. On 24 August 2020, he was elected as the inaugural Speaker of the House. On 5 September 2020, he was appointed cabinet minister for the Foreign Office as First Ambassador.

Stewart lives permanently at his residence in Edinburgh, which also serves as the Austenasian Consulate in Scotland. He began his undergraduate studies in 2011, graduating with a MA (Hons) in philosophy and linguistics in 2015. He gained a professional diploma in librarianship in 2016. Stewart is an amateur maritime historian and he is also known to have an expert level knowledge of Scotch Whisky. Stewart is a Presbyterian.