He is widely known as one of the architects of modern St.Charlie, with his official portrait appearing on the 50 Pianeta banknote. Other than the diplomatic career, Lunam is a lover of British rock band Dire Straits and enjoys writing in his spare time.

Lunam was born in mid-August 1993 in the city of Bologna to a middle-class Italian family. James grew up in the small town of Castenaso, surrounded by the countryside of the Emilia-Romagna region. He attended the local primary and secondary school. He is currently a student at the Industrial Chemistry Department of the University of Bologna.

James met Alexander Reinhardt on the internet in March 2006. He became a good friend with him although they started talking vocally to each other only in the summer of 2007, through Skype. 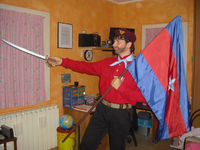 It must be obviously said that Lunam was unable to fight directly the November Revolution, since he was too distant from District. However, he offered himself for supporting the Movement for St.Charlian Liberation, and was nominated an officer by Reinhardt. Following the end of the November Revolution, in which he was one of the leading officers, on November 23, Lunam was nominated part of the new-born federal Government, in order to succeed the St.Charlian monarchy. On the day the Constitution was ratified, Lunam became President of the St.Charlian Parliament under both Secretaries Reinhardt and Whisky I, who took his place on December 1.

In January 2009 Lunam and Secretary of the Treasury Athlon Strauss were the only two members of the Reinhardt Administration who were physically in Italy. He was nominated before the ratification of the Branson Act 2009, making the General Assembly, under him, de facto the venue of the National Party of St.Charlie. Lunam, however, was never officially affiliated to a political party. He was succeeded by Sumaya Ilmi Guled after the creation of the federation of New Ridgeway. This was the start for the diplomatic career of both politicians: Strauss became Consul in Italy, while Lunam was nominated in charge of Italian-St.Charlian relations, in order to compensate the fact that Italy did not sign the Montevideo Convention of 1933. In case of any issue with the Italian Government, an executive was needed in order to solve any queries; Lunam accepted the position of Diplomatic Representative for Italian-St.Charlian Relations, which changed in Ambassador in Italy after few days.

On April 5, 2009, Lunam was made a Knight of the Order of the Blue Star for his charity services: In April 2009 he together with Alexander Reinhardt founded the Ambassadorial Council, and was nominated its first and current President, or First Ambassador. During the first months, the Council became officially responsible for all foreign relations and the foreign policy of St.Charlie, sometimes even being more powerful than the Foreign Affairs Department itself. By the end of 2009, the problem was solved through the De Armis Law on Simplification which made the Council the only body responsible for foreign affairs. In January 2010, following the General Elections of 2010, Lunam officially became the Foreign Minister of the Federal Republic, as First Ambassador.

As Foreign Minister, Lunam started playing a direct role in the St.Charlian Government. Not only he helped the creation of the St.Charlian Commonwealth, and various reforms for his ministry, including the laws on citizenship and the Lunam-Reinhardt regulations on the Foreign Affairs Department; he also collaborated in other projects, like the reforms on the Department of Defense among others. He was promoted to the rank of Officer of the Order of the Blue Star on July 20, for his general contribution to the Federal Republic.

After the death of Whisky I, Lunam helped neo-President Lisa Cassidy on her first days of presidency. He supported Alexander Reinhardt's candidacy for Prime Minister in 2011. When Nicolò Alvisi was elected as Prime Minister, Lunam was confirmed as head of the Ambassadorial Council. After his promotion to the rank of Commander of the Order of Blue Star on February 28, 2011, he was invited to an unofficial visit to the borough of Puntarossa, where he visited the headquarters of the National Party of St.Charlie and had dinner with Alexander Reinhardt and other party members. On March 5 he was made a Knight of the Order of Flandrensis by Niels of Flandrensis.

In Febraury 2012 he was elected President of St.Charlie and he continued to contribute actively to St.Charlie with new proposals. He attended the PoliNation 2012 with the St.Charlian Delegation. During this meeting he met a lot of micronationalists with different views about how rule a micronation. After his return in Italy, he started to write, together with Alexander Reinhardt, a new Constitution for the Federal Republic, which was promulgated on November 30, 2012.

His Excellency the Ambassador received the Knighthood for his incredible service in charity, after his numerous donations for the IMRAC. He is also awarded for his outstanding work as Diplomatic Representative in Italy. (Translated from Italian, Albo dell'Ordine della Stella Blu)