The founder of the Republic of Petorio, he was elected as its President in October 2008, and was supposed to stand for re-election in 2010. However, the inactivity of both Koolidge and his colleagues, which officially started in the second half of 2009, caused an interruption of all political activities, thus keeping him de facto in power until now. As of December 2012, Petorio hasn't notified the international community of an election taking place. He also serves as the governor of Charwood, his home state.

A leading figure in intermicronational politics from Mid-2008 to the summer of 2009, Koolidge is widely regarded as one of the architects of the MicroWiki Community, together with Renasian leader Jacob Tierney, St.Charlian politician Alexander Reinhardt and Francillian Grand Duke James Stewart. He was a promoter of the Grand Unified Micronational, serving in its executive team from February to July 2009: while in office, the Constitution of the GUM was drafted and ratified.

Koolidge ceased his micronational activities in late 2009 but returned for a short period after the demise of Erusia in July 2010. Several micronationalists claim he has abandoned micronational politics.

Kalvin was born on May 29, 1988, in New York, United States. He was also raised and attended school there. His mother worked at a discount store and his father was an injured construction worker thus Kalvin did not have a lot of money in his family and grew up very poor. He was, for the most part, raised at his grandparents' house. Early in life, he met former Vice President Barry Ortiz and current Vice President Misty Miller.

In 2006, he and his lifelong friend, Barry Ortiz, decided to start an unrecognized country. At this time they were unaware of what micronations were and claimed it was "just for fun" at the time. This changed when Barry heard about Molossia in 2008 and told Kalvin. He was then inspired to take Petorio a little bit further by making larger territorial claims and a website. Today Petorio has about 15 active citizens and is actively serving in GUM on the Security Council. On September 26, 2008, the constitution was written and was signed by Kalvin, Barry, Joe Paulin, Drake Splinter, Jimmy Vincini, Amy Koolidge, and Sebastian Russo. This is the true "birth of Petorio", according to Kalvin and other leaders of the Republic.

On 13 October 2008, some citizens of the then 4 provinces, and territories voted for a two-year leader (president). The election was between Barry Ortiz and Kalvin Koolidge (the 2 co-founders). Kalvin was victorious and started his two-year presidency on October 15 after picking a Vice President. He will be eligible for reelection in 2010.

On 15 October 2008, Kalvin Koolidge was inaugurated as the President of the Republic of Petorio. He picked his Vice President to be Joe Paulin on October 15 but after 2 days he resigned. Koolidge decided on October 17 to pick his opponent as Vice President. As the president, he has the highest authority in Petorian politics. On October 15, 2008, he requested Parliament put forth a law, which they did. On October 17, 2008, after it was passed by both houses of Parliament, Kalvin Koolidge signed the "Petorio Energy Act 2009" which bans incandescent light bulbs as of January 1, 2009. Koolidge also declared his wish to deliver a State of the Nation address to Petorio twice a year.

On 30 September 2009, Vice President Barry Ortiz announced that he would be resigning soon. After a lengthy discussion with Koolidge, he was given permission and on October 1 Ortiz was succeeded by Misty Miler. Ortiz is no longer involved with micronationalism. 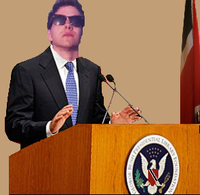 On December 16, 2008, citizens Drake Splinter and Jimmy Vancini released a fake newspaper article in The Charwood Tribune, claiming that they saw Koolidge paying Barry Ortiz $500 for keeping quiet about selling the Vice President seat to him. This turned out to be false after a voting session found Kalvin not guilty with 10 votes to 3.

Beginning on January 28, 2009, Koolidge began receiving messages from senator Misty Miller about another (now defunct) micronation that was claiming land rapidly only about 8 kilometers from Beachfront Territory. The land claims eventually became only about 6 kilometers from Beachfront before leader Gerald Armstrong sent Kalvin Koolidge an e-mail giving up all of his micronation of West Acadia except for his home. This area is now part of the Petorian "Acadia" province.

In late 2009 there was an internal conflict in Petorio that caused the nation to become inactive for a period of about 4 months. Koolidge played a major part in reforming the Republic of Petorio by helping write the April 2010 amendments to the constitution along with Misty Miller. Petorio returned to activity on 1 April 2010 with a stronger government.

Book and other projects

On April 5, 2010 Kalvin Koolidge informally announced that he would be writing a book on micronationalism. He has not yet announced details on the book.

Koolidge is also currently working to help a local micronation create its government.

Koolidge became a citizen of Francisville in January 2009. On 15 May 2009, he announced his candidacy for a seat in the Chamber of Deputies[1]. Koolidge was elected in the 2009 election, serving as a Deputy for one full term. He retired before the 2010 election.

As we enter the next era of the micronational world, it's important that we don't forget what Petorio stands for...The Republic of Petorio has always stood for freedom and peace as long as I've been president, and hopefully [will] after.

I...demand that you withdraw your decelerations of war against the USMR, Northwood, Murrayfield and Lunt Village. This is a threat to the entire micronational community and the GUM will not stand for it! If you do not comply with my requests you may prepare for the consequences.

Petorio has a very bright future, we just have to govern our nation correctly and not allow it to slip into inactivity again...we chose to leave this country and our citizenship behind. I am not saying that I am innocent in staying loyal to Petorio when we slipped into inactivity, though I am saying it was wrong of all who did

— On Petorio slipping into inactivity