The Republic of Petorio (Spanish: República de Petorio, Petorian: Republico de Petorio) was a micronational federal republic located in North America. A delicate blend of executive and legislative powers, its strong executive branch was ruled by the president, Kalvin Koolidge, and comprised of seven provincial governments. Petorio's legislative branch was ruled by Parliament, which had an unicameral system. Its judicial branch was overseen by a single Supreme Justice whose responsibility was to ensure the adherence of Petorian law in all levels of government.

Petorio was founded on 26 September 2008, and went permanently inactive in late 2010. Although it had an unstable history dominated by sporadic lapses in activity and featured elements which would now usually be considered unprofessional, it is remembered as one of the foundational members of the MicroWiki community, and was founded in the same month as Austenasia, Flandrensis and Scientopia.

The Republic of Petorio was founded on 26 September 2008 by the then 20-year-old Kalvin Koolidge and lifelong friend Barry Ortiz with the promulgation of the Constitution, which declared Petorio to be a sovereign nation separate from the United States. Due to a lack of funds, Koolidge was forced into adapting the flag of Trinidad and Tobago rather than purchasing an expensive custom flag to fly in his front yard and proclaimed territory of Petorio. The flag was continually flown from 26 September 2008 to 4 March 2009, when an altered version of the flag was adopted. Although Petorio was officially founded in 2008, it can date its roots further back to a prior micronational entity founded by Koolidge in 2006.

On 1 October 2008, Koolidge and Ortiz decided the permanent location of Petorio would be their homes and the surrounding areas. Two more territories joined the republic later on, seceding from Canada. The constitution was officially ratified by the then four provinces of Petorio on 10 October. These four provinces swore to enforce the rules of the constitution, comprised of simple civil rights and the governmental structure. Kalvin Koolidge was elected president of Petorio on 13 October 2008, and subsequently took office on 15 October. In this inaugural federal election, Koolidge won with 11 votes to 5, the others being cast for Ortiz, who became Vice President. The next several months saw a drive to recruit more citizens in addition to an expansion in Petorio's provinces, with the Republic claiming Beachfront on 25 October, Charwood on 6 January 2009, and Acadia on 10 February, as well as diplomatic relations being established with several members of the MicroWiki community.

Petorian influence in the MicroWiki community was bolstered due to their prominence in the conflicts surrounding Black March. Koolidge played a leading role in negotiating an end to the Meissner-Antifan War, and joined New Europe in declaring war on the fabricated Kingdom of Camuria in the Camurian War.

Petorio was a strongly environmental nation. Koolidge's first law as elected president was to ban incandescent light bulbs, which went into effect on 1 January 2009. On 28 March 2009, the Republic of Petorio participated in Earth Hour, switching electricity in all government buildings off from 8:30pm to 9:30pm EST. On 22 April the following month, the Republic celebrated Earth Day, and in observation of the event switched off electricity for three hours.

On 2 June 2009, it was announced that a constitutional reform would take place. The constitution was to be either rewritten or heavily amended. It was originally set to be rewritten by 25 June, but several members of the government left the nation, delaying the reforms to March 2010. 1 October 2009 also saw the resignation of Ortiz, who was succeeded by Misty Miller.

The government began to go inactive, and a conflict between the nation's leaders led to most of them - Koolidge included - renouncing their citizenship on 9 March 2010, leading to a de facto dissolution of the nation. Vice President Miller was the only leader of the country to remain, and persuaded Koolidge to return to the presidency and refound Petorio on 1 April the following month. However, fewer than half of the rest of the former citizens rejoined alongside him, and Petorio was unable to return to its former levels of activity.

In July 2010, Koolidge announced that presidential elections were scheduled for 13 October later that year. He and two other politicians announced their candidacies, but the date of the election came and went with no news forthcoming. Petorio is therefore assumed to have gone defunct in the second half of 2010, having been suffering from inactivity and internal conflicts for some time.

Petorio is remembered as one of the most prominent members of the early MicroWiki community, playing a leading role in the creation of the Grand Unified Micronational.

On 30 November 2008, Petorio joined CUNT (Countries United in National Trade), and then became a founding member state of its unofficial successor the Grand Unified Micronational (GUM). Koolidge took over from founder Jacob Tierney's de facto role as leader by becoming the first elected Chair of the Grand Unified Micronational, serving from 15 February to 13 April 2009. During his term he oversaw the GUM's response to Black March and established many conventions governing the administration of the organisation, becoming one of its three main architects alongside Tierney and Robert Lethler. Koolidge was succeeded as Chair by Lethler. On 31 May, the office of Vice-Chair was established; Koolidge was confirmed as the first Vice-Chair, serving under Lethler until the end of his term on 13 July later that year. Petorio was also on the Security Council from July to October 2009 and April to July 2010, and on the Advancement Council from February to July 2009 and July to August 2010.

From its entry into CUNT, Petorio began to forge friendly relations with most of the members of the quickly coalescing MicroWiki community, concluding alliances at various points with (in chronological order, albeit with most precise dates unknown): 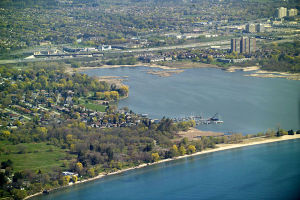 An aerial view of Beachfront Territory

Petorio claimed several "provinces" in the Northern United States and Southern Canada, cumulatively home to thousands of people unaware of the micronation's claims. Petorio freely admitted that most of the people living in its claims had no connection to the micronation, and clearly distinguished between "citizens" and "residents". 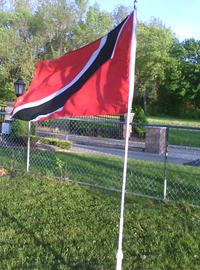 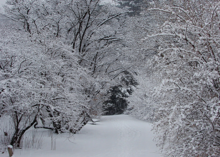 A typical winter day in most of Petorio.

Heatwaves were not uncommon during a typical summer. It could be noticeably cooler on many spring and early summer afternoons under the influence of a lake breeze in comparison to other regions.

Other low-scale maritime effects on the climate included lake effect snow, fog and delaying of spring- and fall-like conditions, known as seasonal lag. Petorio was located entirely in the Snowbelt region of North America. The mean temperature for the month of July was 21.8 degrees, and the mean temperature for the month of February is -4.7 degrees. Precipitation was plentiful year round, but summer was usually the wettest season.

Petorio attempted to run an economy based on its own currency, the Petorian Dollar ($PED). $1 PED was initially pegged to 10¢ USD in September 2008, but was later brought up to 25¢ USD. Due to low circulation of the currency, the government declared an economy "crash" between 6 October and 7 November 2008. Banknotes for the Petorian Dollar were redesigned in May 2010.

Petorio was headed by an elected President who served as both head of state and head of government. The 2008 election on 13 October was the only one to take place, and had Kalvin Koolidge win against Barry Ortiz. The President was assisted by his deputy, the Vice President.

The Parliament of Petorio met each month to discuss the creation of new laws, and consisted of one house, with one Member of Parliament representing each province.

Petorio was known for its commitment to and showcasing of an organic, diverse culture. Within its various provinces, it counted American, Canadian, Italian, Hispanic, African and Egyptian groups as citizens.

Petorio's national animal, which was used as a symbol on things such as currency, was the Siberian Husky, the same breed of dog as that owned by Koolidge. The Owl was sometimes considered a secondary national animal, due to appearing on the official seal and on the flag of the province of Nandor.

Petorio named the Red Maple Tree as a national tree due to its abundance within the Republic's territorial claims. Other national symbols of Petorio included the famous adopted flag of Trinidad and Tobago it claimed as its own, its coat of arms, its national anthem and its national food. Some cultural figures admired by the Petorian government included Emperor Norton I alongside one Joey Russo, the owner of a local Italian bakery.

The Charwood Tribune was Petorio's national newspaper from December 2008 until May 2009. After production was suspended in May, it became obsolete until April 2010 when it returned as a news website. A short lived TV station, History PET was also broadcast in Petorio from May 2009 to September 2009.

Petorio celebrated eleven public holidays. Alongside New Year's, Valentine's Day, Earth Day, Thanksgiving, Halloween, and Christmas, the Republic also celebrated holidays unique to Petorio, the dates of which are no longer certain: Independence Day, Constitution Day, a Lunar Festival, Anthem Day, President's Day and Erusia Day. A referendum took place on 21 December 2008 to decide whether Hanukkah should become a national holiday, but was decided against.

The Republic had three official languages at a federal level: English, Spanish, and Petorian (the latter being Petorio's own conlang). Other languages, including Polish, French, and German, were spoken in Keystone Territory, the most multicultural province. Spanish was an official language even though only two citizens spoke it fluently, with the rest speaking it either poorly or not at all.