Danburnia was a virtually-territorial micronation located in the fictional archipelago of the Hontui Islands in the northern sector of the Pacific Ocean. Officially established as a Monarchy with its founder, Daniel Blackburn, as king, it then adopted an elected and more democratic form of government, with Blackburn as head of state, Tom Murtagh-Nelson as Vice President and Joe Chapman as Governor of the island, the latter being considered a ceremonial title.

Danburnia was, throughout its existence, one of the most notable micronations of the Hontui sector and is considered by many as one of the first "Hontui micronations" who helped establishing the MicroWiki Community, together with the also now-defunct Stigistan, Tozland and Murrayfield, which at the time was an Imperial Republic. The Danburnian Article, the official newspaper of the Government of Danburnia was one of the most read pamphlets in the community in 2008 and 2009. Its last edition is from May 25, 2009.

In mid-2009, Blackburn declared on the Article that the nation would have resurrected again, but it later fell into inactivity and was annexed by the Socialist Republic of Murrayfield. Danburnia and Murrayfield merged with Barrington in June 2010 to form the Republic of Wyke.

Danburnia was founded by Daniel Blackburn on November 8, 2008. The next day, the President went around gathering citizens for the new country. There are many rules and initation interviews to become a Danburnian citizen because the president wants a safe and happy country. At the time of dissolution, Danburnia had 15 citizens.

When it was founded, Danburnia was a Monarchy, with Daniel Blackburn as King. In January 2009, the nation switched to a Democratic Republic, with elections scheduled every twelve months. The first election took place in January 2009, with Blackburn winning, to become Danburnia's first, and only, President.

Danburnia had aset of written laws, which it called the Danburnian Commandments. These consisted of mainly macronational common laws, although it did create some of its own. The original draft of Commandments had a religious tone, although they were changed after outside pressure.

The Commandments were given to every new citizen in the form of a handbook, with full descriptions of each law and its meanings.

The Commandments contributed in the formation of diplomatic ties between Danburnia and Scientopia, now known as Renasia. 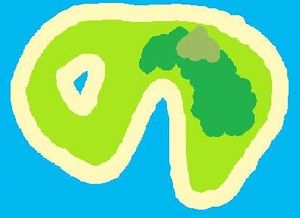 From its creation Danburnia claimed to be located on small island in the North Pacific Ocean, along with the other Hontui Islands. Danburnia's land composition was of grasslands and hills. As the island was a fictional setting, Blackburn was able to create policies designed to preserve its "natural state". All buildings were said to be made from renewable products (trees), and cycles were the only accepted form of transportation. This was because of the carbon emissions that other methods of transportation normally give off.

Danburnia had its own currency, known as the Dan and Burns. Dan was symbolised by 'D' and burns by 'b'. One Dan was equivalent to 100 Burns and to five Sterling pounds, while one Burn was equal to 5 pence.

The coat of arms, together with the flag was designed by the President as well. It is made up of the Danburnian flag, featured in the middle, the Danburnian motto Peace for all and two arms forming the peace symbol, one on each side of the flag. One is white and one is black, made to represent the peace between ethnicities. The animal on top of the flag is a seagull, which was the national animal of Danburnia.

Danburnia, like all other Hontui nations, gave a high priority to sports. The national sport of Danburnia was table tennis. Matches were held every Tuesday morning at Kelvin Hall School.

Danburnia also participated in the Hontui Premier League, the intermicronational football federation of the Hontui Islands. Danburnia participated together with Tozland, and Stigistan. The first season was played but Danburnia pulled out of the legue after the team was unable to commit.