This article is about the defunct sovereign state. See Canton of New Scireland for its successor.

New Scireland was a former territory of Sandus, at the time of the Barony. The territory was officially established on 5 January 2010 following a request of charter by Cameron Falby to Baron Guillaume Soergel, who answered as such:

On January 18, 2010 at 3:05 EST, New Scireland Declared independence from Sandus after a statement by the Sandum Government which limited New Scireland's freedom in foreign affairs:

Sandum-Erusian relations are suspended indefinitely by the Baron of Sandus, this order will take effect 15 January 2010 and will effect the foreign relations of New Scireland as well. 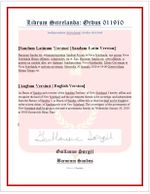 New Scireland was bordered on all sides by the State of Maryland in the United States of America. The Nation functioned around and within Castle Hesperus, a residence which also served as the Embassy of New Scireland to the U.S.A, but claimed no land.

Castle Hesperus was the Capital of New Scireland, acting as the meeting place of the Citizen's Council, and was the residence of the President. The building was named after the poem by Henry Wadsworth Longfellow; "Wreck of the Hesperus".

New Scireland was a Direct Democracy, lead by the President who acted as representative for the nation. The constitution of New Scireland was signed into effect on 18 January 2010 after declaring independence from Sandus.

The Citizen's Council made up the Legislative and Judicial branches of the New Scirish government and was lead by the President with the Council Chairman as second in command.

The Council Chairman's main duties were to organize and regulate council voting, act as chief of the New Scirish National Police Force (NSNPF), and oversee any trials not presided over by the President (see section 3.1).

The legislative duties of the Citizen's Council were quite simple, to vote on bills acts and treaties put forth by the president or any citizen. The council also had the ability to negate any veto made by the President with a 2/3 majority vote.

The council's only judiciary duty was to act as the jury in all court cases, and decide on outcomes after hearing statements from the defense and prosecutor or their respective legal representation.

The Judicial System of New Scireland was based greatly on the decision of the Citizen's Council.

Trials in New Scireland consisted of a Judge, a prosecutor, a defendant, a jury, and a representative from the EF. Any one person could only fill one role, for example, if someone is acting as prosecutor, they could not also serve as a member of the jury.

The judge in any New Scirish trial was always either the Council Chairman or the President (only for Federal-level trials). The main duty of the judge was to keep the trial in order and sentence punishment on those accused who are proven to be guilty.

The roles of prosecutor and defendant could either be filled by the accuser/accused or a representative of their choice, if there were none available, the government of New Scireland could provide a member of the Citizen's Council.

The jury was made up of as many members of the Citizen's Council can attend the trial, anyone not already filling a role in the trial was able to pass judgment.

The jobs of the EF representative were to keep order in the trial and advise the judge on criminal punishments.

The NSNPF, or New Scireland National Police Force, was established to enforce the laws of New Scireland within the nation's boundaries and to investigate government corruption, terrorist threats, and Federal Crimes. The NSNPF was split into two branches accordingly with its two separate duties, the Internal Investigation Agency (IIA) and the Enforcement Force (EF). The IIA was set up to keep an eye on the government and any threats against it, the units of the IIA are specially trained and have the right to override any orders, given by the council or the President, in order to preserve the nation's government and protect its citizens. The IIA was based in Castle Hesperus to provide immediate access to the council and President. The EF had the duty of enforcing the laws of New Scireland within the nation's borders. The EF had a headquarters in each region of New Scireland, headed by a Chief of Police who reported to the Council Chairman.

The Flag of New Scireland

The Flag of New Scireland took elements from the flags of Scotland and Ireland, with different meanings for each one:

The Crest of New Scireland

The Crest of New Scireland was made up of a green and blue belt, representing togetherness, which bears the New Scirish motto: "Aonaibh Ri Cheile", meaning unite in Gaelic. This belt encircles a torch which represents equality, the founding principle of New Scirish Government.