From MicroWiki, the free micronational encyclopædia
(Redirected from Landashir)
Jump to navigation Jump to search

Landashir or the Landashir'n Community, officially the Community of Landashir (Francillish: Das Commun vus Londeland) is a micronation formed in 2001. Landashir is a self-declared 'co-operative, commune or collective whose Territories and Authorities should be recognised as autonomous, indicating political separation from the United Kingdom'.[1] The country is also one of the oldest micronations in the MicroWiki community[2] boasting a developed culture, an open foreign policy and a unique form of government.

The word "Landashir" has two possible etymologies. Previously, the word was written as Landashire, which is coherent with the naming of counties in the British Isles, literally meaning "shire of land". However, a alternative explanation has been offered: the word for "Landashire" in the ancient Landashir'n language (ßat llondeshieiu).[3] "Llondeshiei" means 'land (shiei) of the River Llon (llonde)'. 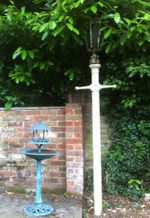 The Lighthouse Monument in West Landashir

Landashir was originally founded in 2001 by James von Puchow and his family. In August 2001, the house and gardens which were owned by the von Puchow family and the nearby forested region of Llabdey were declared independent, though this declaration was not codified until 2008, when the first constitution was written. In 2008, the then Crown Principality of Landashir came into contact with the micronational community and established its presence on MicroWiki[4][5]

In early 2010, the HRI James II announced that the Crown Principality, its monarchy and the territory of Sycamore Booker, would be dissolved, and Landashir would make a transition solely to the Antarctic Community of Landashir, consisting of 2 claimed Antarctic islands, previously belonging to the Kingdom of Finismund.[6] In September 2010, the Community of Landashir re-established itself with British and Antarctic territory as a political commune.[7]

As of April 10, 2011, Landashir was accepted into the St.Charlian Commonwealth as a Permanent Territory.[8] However, in mid-2014, after a brief period of inactivity, a government declaration made it clear that Landashir would attempt to forge a new relationship with the Federal Republic of St.Charlie and renounce its Antarctic claims.[9] Today, Landashir consists purely of its original 2001 territory, with the political status of nearby Llabdey, considered a "protectorate" of the Landashir'n Government, still unclear.

The June 2014 Declaration clarifies the governmental structure of the country; as a commune, legislative power is vested in the Landashir'n Government, comprising of all citizens. There used to be one position in the Government, that being the person who is Head of Government, or the "Premier" who held administrative and other designated powers as per the leniency of the government. However, this position has since been dissolved into a voluntary role as "government representative". Both the premiership and and the role of government representative have been held by James von Puchow since 2010.

The Government is completely non-partisan and holds no official political ideology. Legislation and decisions made often reflect social attitudes not only in the United Kingdom, but also in the Federal Republic of St.Charlie.

According to the June 2014 Declaration, "Agencies and Ministries of the Government exist as per the discretion of the consensus of the Community" and the government exists to, amongst other things, manage official borders, protect citizens internally and externally and establish diplomatic relations between Landashir and other nations.[10] For example, the state issues citizens with official identity cards.

Due to its size, Landashir does not have emergency services and all vital services such as water, gas and electricity are provided through its border with the United Kingdom; the Landashir'n Government administrates payments which would otherwise be paid as taxes to the British state. Therefore, the country is not self-sufficient, but merely politically independent.

Landashir is located in the British Isles, specifically in the town of High Wycombe. The surroundings are majorly hilly and populated with many varieties of vegetation and fauna. Landashir has no rivers or bodies of water, apart from a still pond in the west of the territory. Landashir is predominantly a residential territory with a high density of sycamore trees, daffodils and pampas grass. In the east of the territory, the capital and primary settlement of Sycamore Booker is located. Landashir borders the United Kingdom solely.

In close geographical location is the forested territory of Llabdey, previously a Department of the Slinky Empyre, reclaimed, catalysing the Dissolution of the Slinky Empyre.[11] The status of Llabdey is not clear; legally, the territory is still part of the United Kingdom, but is considered culturally significant to the Landashir'n people. The Landashir'n Government has often affectionately called Llabdey a "protectorate".

The territory is split traditionally into 3 sections:

All 3 sections are connected to each other by one of Landashir's only two main roads. Renoir Grove is a small path that starts at the open border with the UK in the east and finishes at the Northern District.

Border with the United Kingdom

Southern frontier with the United Kingdom

As Landashir'n territory comprises of a residential lot, the border with the UK is well defined in the north, south and west, but not in the east.

As pipelines and cables run underneath this residential lot, the territory claimed as belonging to Landashir has had to be adapted so that the residential building in Sycamore Booker may have access to electricity, gas and water. One sixth of this building exists outside the Landashir'n border as a result. Due to the lack of enforced border controls, passing over the UK/Landashir border is a daily occurence within this building, especially to access the upper floor.

The climate is the same as that of the south-east British Isles. Rainfall levels can reach up to 42 mm, and the area is rarely susceptible to flooding due to its position on top of a hill in the Chilterns.

Sycamore Booker is traditionally influenced by Home Counties culture. There are no major distinctions between general British and Landashir'n cultures which can be noted.

There are no official languages of Landashir according to the June 2014 Declaration's "Statement of Identity", but de facto, the commonly used languages are English and Francillish.[12]

Historically, the territory was home to several failed conlang attempts including "Ancient Llabdein" which was also used in Llabdey. "Stefahausen" is the only remaining example of Ancient Llabdein being used today, meaning "Steven's home". How this name came about is practically unknown.

As Landashir manages most of its diplomatic relations through social media and e-mail, there are no official embassies or consulates at this moment in time.

There are no restrictions on who can enter, but guided tours and diplomatic visits often include passport checks and official conferences with the government.[13]