This article refers to the canton of Francisville. See here for the later sovereign state.

Rudno (Ripuarian: Rôdenau) was a canton of Francisville situated in Weyrland region in central Europe, bordering Pristinia, Erephisia, and Germany. The official languages of the canton were Ripuarian and German. Rudno declared independence in 2014, forming the Commonwealth of Rudno.

Rudno is the anglicisation of the German Rodenau, stemming from roden (German: to deforest, from Old High German riuten "to clear (an area)", from Old Norse ryðja "to clean up", cf. Old English aryddan "to remove" & Modern English rid as in "to get rid of", "to rid oneself/someone/-thing of") and Au(e) (German: flat, sometimes wooded meadow by a water body, from Old High German ouwa, cf. Proto-Indo-European *awjō, *agwjō "pertaining to water", cf. Old Norse ló "meadow" as in Vikingrló "Wicklow" and Oslo). In reference to the fact that the original territory (and an even larger part of the current territory) of Rudno was a flat area with some forest by a water body, where some deforestation has taken place.

Rudno originally formed a territory of Pristinia, whose long micronational history can be traced back to the tongue-in-cheek pretend nation called the "Chambrian Realm" (German: Zimmerisches Reich) founded by Sebastian Linden. In late 2011, Linden became a citizen of Francisville, during the early period of the June Convention. Linden approached James Stewart with the proposal for Rudno to become a canton of the new Federal Republic. The incorporation of the canton of Rudno was approved by voters in a referendum held on 13 – 16 January 2012. Following the adoption of the federal constitution on 16 August 2012, Linden was elected to the Federal Council. In this role, he represented Francisville at both the 2013 Intermicronational Summit and the Midsummer Micronational Meeting 2014.

Francisville suffered from period inactivity throughout the era of the Federal Republic. Sebastian Linden explicitly raised the concern during a meeting of the Federal Council in April 2013. This issues became increasingly problematic by late 2013, with decision making capacity available on the Federal Council due to the absence of some of its key members. North Llabdey declared independence from the Federal Republic on 3 June 2014.</ref> The independence of North Llabdey caused a similar discussion to arise in Rudno. On the same day, Rudnan governor Sebastian Linden issued a statement promising a referendum on Rudnan independence.[1]

Linden's statement was followed by negotiations on the future of the federation between Linden and James Stewart. The discussions outlined a series of reforms, known as the “AGREE programme”, which would include the abolition of the Federal Council, the empowering of the Federal Chamber, and redistributing further powers from the federation to the cantons.[2] Following the lack of progress on these proposals, Rudno declared independence on 8 June 2015[3] Following a lack of response to these events, the state was considered defunct by the intermicronational community. Austenasia officially recognised the Commonwealth of Rudno as a successor state to Francisville at London summit on 18 July 2015. 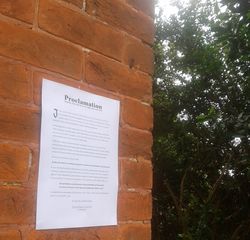 The Versammelong was the legislative body of the canton, formed by an assembly of all citizens with full political rights. The Governor (Guvernör) served as the head of government, and was elected every four months by a plurality vote. Sebastian Linden served as Governor for the duration of Rudno's existence as a canton.

At federal level, the canton was represented by one deputy in the Federal Chamber.

There were two types of communes, rural and urban. Rural communes had a commune reeve (de: Gemeindegrev, ksh: Jemejndejreef) as their executive, while urban communes had mayors (de: Bürgermeister, ksh: Bürjermejster). Urban communes could further associate into urban conglomerations, in which case the inhabitants of said conglomeration further elected a supreme mayor (de: Oberbürgermeister, ksh: Oberbürjermejster) to preside over a metropolitan council (consisting of the individual mayors).

The unincorporated areas, unlike communes, did not have offices associated with them, or in fact any form of associated authority. They were considered subdivisions of the canton with no autonomy or devolution. They exist for various purposes, such as law enforcement boundaries (as some urban police forces had jurisdiction extending into certain surrounding unincorporated areas).

There were only two communes, both urban, and no conglomerations:

The remainder of Rudnan territory was organised into 5 unincorporated areas:

The culture of Rudno was heavily influenced by the cultures of Pristinia and the Rhineland. The predominant official language of Rudno was German. Rudno was the only canton which did not recognise English as an official language. As a consequence, it was also the only canton to have a citizen who had not attained native level proficiency in the English language. Additionally, the Ripuarian language was spoken and official in Rudno. Rudnans placed emphasis on preserving and promoting the use of Ripuarian and government publications were typically translated into the language. Kölsch was the predominant Ripuarian variety spoken in the canton.

Rhenish dishes were important in Rudnan cuisine including regional specialities such as pumpernickel. This influence also extended to savoury cooking with traditional German dishes including Reibekuchen, Sauerkraut and Kottenbotter. German white wine varieties such as Riesling, mostly from the Rheinhessen and Mosel regions, were important as good pairings to Francillian food. Rupurian song Drogt Gedochte was similarly considered to be the anthem of Rudno.