Countess Eritoshi of Memphis is a former Austenasian politician and military officer and Orlian noble who served as Prime Minister of Austenasia between 19 November 2013 and 4 March 2015, and as Countess of Memphis between 26 September 2012 and 16 September 2018.

As Prime Minister, Eritoshi functioned as an "enforcer" for the policies of Emperor Jonathan I, using the Prime Ministerial deciding vote and the prestige of her office to have legislation proposed by the Emperor passed more easily through Parliament. The Countess etablished the Green Party of Austenasia to organize her supporters and release her electoral platform in the March 2015 general election, but lost the vote to Brooklyn Hewitt.

A close friend of Emperor Jonathan I, Eritoshi was on 20 September 2013 given the rank of Augusta and the style of Imperial Highness by Jonathan I in an edict which gave her "rank and dignity" which was "second within Austenasia only to" the Monarch himself. She resigned from Austenasian politics - and from all her Austenasian positions (including that of Augusta) except her military office - on 4 June 2016, prior to which she had also been Representative of Thanasia and Chief Advisor of the Privy Council. Her remaining Austenasian titles and offices were removed on 14 June 2017, upon the dissolution of Thanasia; in September 2018, she was also replaced as Countess of Memphis, after falling out of contact with the Emperor.

Eritoshi first met Jonathan I (while he was still Crown Prince) on the journey back from a sixth form trip on 12 July 2012. She was appointed Countess of Memphis, capital of Orly (then under the control of New Wessex) by King Declan I on 26 September 2012 by the request of the then Crown Prince Jonathan. Upon his ascension to the Austenasian Throne on 20 January 2013, Emperor Jonathan I granted Eritoshi the style Illustrious Highness the following day as his first act as Monarch. The Countess attended the coronation of Jonathan I on 23 February the following month, at which she helped to officiate as Leader of Ceremonies.

On 14 May 2013, part of the Countess' house was annexed by Austenasia as the Town of Thanasia, by which she became an Austenasian subject and resident. Eritoshi administered Thanasia as its Representative until 29 May 2016, and continued to enforce the law as its Police Inspector until its dissolution the following year.

Countess Eritoshi was present at the Liberation of Orly on 24 June 2013, witnessing the reassertion of Austenasian suzerainty over Orly and the proclamation of the appointment of Calum I of the Grove and Emma I of Copan as monarchs of their respective kingdoms. She played a role in winning Orly its independence from New Wessex, bluntly telling Declan I via mobile phone that there was no support for his reign in Orly and that its citizens would always recognise the Emperor as their overlord. She was appointed Chief Ambassador by the Emperor later that day, and gained autonomy for the County of Memphis under the newly re-established Kingdom of the Grove.

On 19 November 2013, Countess Eritoshi was elected Prime Minister with 66% of the vote and confirmed as Representative of Thanasia (having previously only been Acting Representative) in the November 2013 Austenasian elections. As Prime Minister, she appointed herself and Jonathan I the consuls for 2014, and was appointed Chief Advisor in the Privy Council upon its foundation on 12 March.

As Prime Minister, Countess Eritoshi - like her predecessor as Acting Prime Minister, Lord Marshal William - proposed no new policies and left most active executive leadership to the Emperor. However, unlike the Lord Marshal, the Countess acted as an "enforcer", using her powers and influence to have legislation proposed by the Emperor passed more easily through Parliament and supporting his decisions on executive matters. In this respect, she can be considered to have functioned almost as a deputy Monarch or even unofficial co-ruler, making particular use of the symbolic overtones afforded by her appointment to the position of Augusta.

On 4 February 2015, Countess Eritoshi was confirmed as a candidate for the March 2015 Austenasian general election. She founded the Austenasian Green Party on 13 February later that month as a platform for her policies, but failed to be re-elected, receiving only 21.95% of the vote and being succeeded by Brooklyn Hewitt.

As well as a politician and noble, the Countess was also a military officer in the Austenasian Army. She joined Centuria I Wrythiae on 26 September 2012, and was promoted to Legate of Legio I Britannica by Imperial Decree on 29 March the following year after the resignation of Legate Sir Joseph Goldie from the position. 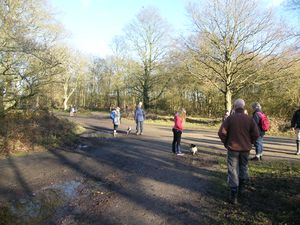 Eritoshi Junction, a location on Wimbledon Common named after the Countess on 1 January 2013.

As one of the closest friends of the Emperor, Countess Eritoshi received several honours. Most notable was her title of Augusta, granted on 20 September 2013 in an edict which stipulated that she held rank and dignity second only to the Monarch and held the unprecedented right to bear a sceptre, accorded to none other than the Emperor himself; she resigned from the rank of Augusta upon her withdrawal from politics in June 2016. Furthermore, while he was still Heir to the Throne, Jonathan knighted Eritoshi a Knight Protector of the Order of the Crown Prince on 23 November 2012, and - after he became Emperor - also made her a Knight Companion of the Glorious Order of St. John on 15 September 2013. A junction of pathways on Wimbledon Common was named Eritoshi Junction after the Countess on 1 January 2013 during an IGS Expedition to the Common, and she was twice appointed a Rushymian Commander.

On 14 June 2017, the town of Thanasia was dissolved, upon which Eritoshi's remaining Austenasian positions, titles and offices were honorably revoked. She was replaced as Countess of Memphis on 16 September 2018 by the now Countess Tania, sister of Princess Hannah.