Cool Barbie is an Austenasian sci-fi fantasy television series directed and written by HIM Emperor Jonathan I and produced by Austenasian Television Productions (ATP). The series revolves around an eponymous Barbie doll in a world where toys are alive and have communities protected by humans, and her encounters with aliens and villains.

Three original episodes were privately made by Jonathan (together with his cousin and sister) before the foundation of Austenasia, between December 2005 and September 2008. After ATP was created in December 2008, it was decided to remake the three films, as well as to create sequels. A new series of fifteen episodes was therefore written, and published on YouTube between March 2009 and December 2018, including three "minisodes". A further one-off minisode was published as a holiday special two years after the end of the main series, on Christmas 2020.

Cool Barbie is set in an alternate universe where toys are alive and have communities protected by humans, where the existence of extraterrestrial life is well-known and accepted, and where magic and elves also exist. The series is mainly set in a house in Carshalton, known by its resident toys as "Xeaphon VII's Land of Plenty" (henceforth referred to as "the Land").

The universe in which Cool Barbie is set is based on a fictional world imagined by the now Jonathan I and his sister Crown Princess Caroline in childhood games played c. 2001-2006. In this world, Jonathan played the character of Xeaphon and Caroline played Moonita, Xeaphon's sister. Xeaphon and Moonita served as the Guardians of the toys' Land, bearing ultimate responsibility for its protection and good governance.

As well as being home to humans and dogs, several groups of toys live in the Land. They are ruled over by a monarch and the Doll Senate, with a form of constitutional monarchy. The toys living in the Land include Barbies, teddy bears, action figures (mostly Action Men), and dolls. There are several rooms in the Land. On the upper floor, there is a room where the Doll Senate convenes, a room used by the monarch as a Royal Hospital, a room home to numerous toys (the "Doll Box"), and another room which has not been featured in the series, connected by a landing. On the lower floor, there is a living room into two parts by a sofa, a kitchen, and a room adjoining the Garden (which is where Protectors of the Realm live in CB.IV and is used as a school for the toys in CB.IX). The Garden is used as a destination to exile toys as a criminal sentence, and underneath the Garden several powerful spiritual beings referred to as the "Titans" are imprisoned, having been defeated in 1290 by one of Xeaphon's ancestors. At the end of CB.VII, a independent Land of toys ruled by a King is established in the Garden, known as Crepundia, but it does not reappear in the series.

The monarch of the toys of the Land is appointed by Xeaphon, as stated in CB.VI. Prior to the events of CB.IV, the Land maintained three separate armies for its security, each lead by a Captain and all following orders from a Minister of Defence appointed by the Doll Senate. The First Army was the largest, equipped with modern equipment such as guns and grenades, and despite later switching sides and allowing Xeaphon and Moonita into the Land initially rebelled alongside Colin in CB.IV. The Golden Arrows were the smallest army (Colin states that they were much larger before a "Battle of the Prison") and had the most advanced technology, including cybernetics, robots, and what appeared to be laser guns; they were Colin's most faithful followers, and supported his coup in CB.IV. The Third Army was the second largest, equipped with medieval technology such as swords, shields, and bows and arrows; they are described as "devoted to Xeaphon", and Colin only considered it safe to begin his uprising in CB.IV after the majority of them had been locked outside in the Garden. The Golden Arrows were exiled along with Colin at the end of CB.IV, and the First and Third Armies continued to protect the Land, renamed to the People's Army and the Royal Army respectively (as first stated in episodes VII and VIII). The Land was also, before their deaths in 2014 and 2017 respectively, defended by Rose and Edd, who were referred to as the Protectors of the Realm in CB.IV.

Another guarantor of the Land's security is Spectrum International Police, an organisation which functions as a form of security force for toys internationally. It is revealed in CB.IV that toy communities can allow whether or not to grant Spectrum jurisdiction over their lands, although the benefits of having trained agents ready to help in crises is evident in CB.II (in which Captain Scarlet arrives to help stop Bubbles) and CB.III and IV (in which Sergeant Grey arrives to help stop Bubbles and Colin respectively).

All of the ATP episodes of Cool Barbie were filmed using the video setting on a digital camera. The original two episodes were filmed on an analogue camcorder, and the original third episode was filmed on a digital camcorder. The first two original episodes were very crudely edited by transferring various clips from the camera onto a VHS cassette, and the third original episode was unable to be edited before being published on a DVD due to technical difficulties with the camera used. All ATP episodes were edited using Windows Movie Maker. 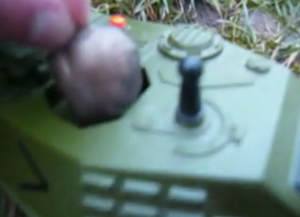 The thumb and forefinger of the then Crown Prince Jonathan clearly being seen to push Bubbles into his spaceship in CB.I.

The majority of characters in the films are toys, with relatively few characters (mostly playing minor roles) played physically by humans. Two methods were used to film the toys "acting": the first method comprised of the character's lines being spoken by their voice actor behind the camera while the toy is recorded, whereas the second comprised of scenes being filmed with no dialogue, for background noises to be cut out and replaced with recorded audio of the characters' lines during editing. Whereas the series began with the first method being used for all characters other than Cool Barbie herself, the second method became increasingly common as the series went on, with all episodes after CB.IX having had their toy scenes filmed entirely in this way.

Despite ATP specifically attempting to film the modern episodes more competently than the originals, some mistakes have been made which were unable to be corrected during editing. This is most notable in CB.I, in which the then Crown Prince Jonathan's hand can be seen numerous times while moving Cool Barbie and Bubbles around the set; his thumb can also be seen holding Colin upright in a shot in CB.IV, and at the beginning of that episode the reflection of him filming can be seen in a window. Another similar incident is when the Dalek can be glimpsed on top of a small cupboard in CB.III, in the scene prior to that in which it is freed by Bubbles. In CB.VII, Moonita can be seen glancing down at a script when talking to Corporal Barbie, and a camera strap briefly falls into the shot later in the episode. Overall, however, this kind of "blooper" is rare. In CB.VIII, two mistakes of this kind - a door switching between being open and closed in different shots in a scene, and Xeaphon pointing a staff at Wisealise which is on the ground next to him in other shots - were addressed post-filming by changing the dialogue to explain that the staff holds reality-warping magical effects.

Lighting can also be an issue; this is especially noticeable in some shots of CB.V, in which some scenes which were set at night and on the Moon are so dark that it is difficult to understand what is happening, and the viewer may have to rely almost solely on dialogue and on subsequent events in the film.

The three original Cool Barbie episodes were filmed by Jonathan I, Crown Princess Caroline and Lord Timothy before Austenasia was founded. Regarded as very badly filmed, these episodes (especially the first two) were full of plot holes, continuity errors, and breaking of the fourth wall, deriving great comedic value from their sometimes intentionally poor quality. The script for a fourth was written, but filming had barely started by the time that the project was abandoned.

The first two films were recorded onto a VHS tape, and were converted into digital format by ATP in September 2014. The third was recorded directly onto a DVD by a digital camcorder, but was unable to be edited until software was acquired in March 2015 enabling it to be downloaded to a computer. The three original films have not been released publicly, but footage from the first is used in ATP's CB.I. Furthermore, with CB.IX made as somewhat of a tribute to ten years of Cool Barbie, audio clips from all three original episodes are used in CB.IX, a short clip from the original Cool Barbie film is seen on a television screen, and clips from all three original episodes are included in a tribute compilation after the credits. More clips from the original Cool Barbie film were included in a montage after the credits of the final ATP episode.

After Austenasian Television Productions was founded in late December 2008, Crown Prince Jonathan decided that ATP would re-make the original Cool Barbie films, and create sequels, all the while improving the plotlines and removing continuity problems.

Since Cool Barbie 2 (2006), numerous references to and characters from 1960s TV series Captain Scarlet and the Mysterons have been incorporated into Cool Barbie.

Spectrum continues to be referenced in nearly every other episode in the series: