Cool Barbie XII - A Last Chance, abbreviated as CB.XII, is the twelfth episode of Cool Barbie produced by Austenasian Television Productions. It was released on 10 August 2017.

In 1291, Xeaphon VII writes to a friend, informing him that he has defeated and imprisoned a Dalek which came to free the Titans to draw on their power. He reflects on the fact that he must stay in his manor, keeping watch over the entrances to the prisons of the Titans, as they cannot be allowed to escape.

In the present day, Corporal Barbie has a dream in which the Elven Emperor tells her that she must kill somebody to avert "terrible things". She awakens, unsure of whether it was a genuine message or just a dream.

That day, Colin and his remaining two followers teleport into the Garden, and using Scourge technology free Kronos, the leader of the Titans. He grants them a wish as a reward for freeing him, and Colin asks that they simply be allowed to be by his side as he conquers the world.

Inside the Land, the Doll Senate meets to discuss the situation. King Yellow Bear informs them that upon Kronos being freed, the Land's forcefield was activated to contain him; unfortunately, that means that they are trapped with him. They try to get through to Xeaphon, hoping that he can re-imprison Kronos with the Thunder Stone and Staff of Forest Elves.

A phone signal gets through the forcefield, but Xeaphon refuses to talk to Corporal Barbie, hanging up on her. Yellow Bear speaks to Xeaphon himself, but is told by a deeply upset Xeaphon that Moonita has died at hospital, having failed to recover from the reversal of her body-swap with Corporal Barbie. The King expresses his condolences, but begs Xeaphon to come to the Land and save them from the Titan; Xeaphon hangs up without replying.

Kronos attempts to leave the Garden, but cannot breach the forcefield that has been raised around the property, powered by the Thunder Stone. He decides to destroy the Thunder Stone in order to prevent his re-imprisonment, and strides towards the Land. Meanwhile, Corporal Barbie attempts in vain to convince some toy soldiers to abandon a suicidal attempt to guard the door against Kronos; he easily breaks through the house's own forcefield with a wave of his hand, killing the soldiers and picking up Corporal Barbie.

Kronos demands Corporal Barbie reveal the location of the Thunder Stone, but she refuses. Colin suggests that instead of destroying the Thunder Stone, Kronos drains its power; in appreciation for the good idea, Kronos grants Colin magical powers.

Colin throws Corporal Barbie across the room with his new powers, demanding she tell them where the Thunder Stone is. However, Colin's Troll suddenly informs them that the main forcefield has been turned off. Realising that this means somebody is trying to get in, they go through the house to the front door.

Kronos is confronted by a disheveled and unshaven Xeaphon, who - armed with the Thunder Stone and Staff of Forest Elves - magically reimprisons the Titan back underneath the Garden. Colin flies across the room and knocks the Thunder Stone out of Xeaphon's hand; picking it back up, the latter realizes with horror that Colin has drained its magical power. Colin declares himself to now be unstoppable, but Xeaphon simply knocks him out with a blow to the head from the Staff.

Corporal Barbie and some toy soldiers arrive, and surround the unconscious Colin and his followers. Xeaphon instructs that they be put in the Cryogenic Research Prison, but Corporal Barbie suddenly receives another vision from the Elven Emperor, telling her that now is the time to "kill him".

Corporal Barbie asks Xeaphon to wait, and suggests Colin and his followers be executed instead. Xeaphon refuses, resolutely against the idea of killing them, and when Corporal Barbie attempts to invoke her authority as a Spectrum agent, Xeaphon loses his patience with her and angrily tells her to stand down.

Colin and his followers are imprisoned in the Cryogenic Research Prison, threatening that they will escape one day and finally be victorious... 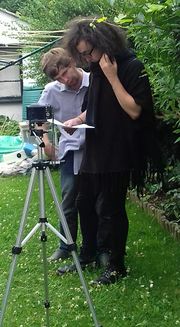 Jonathan I with Sam Legg during production of CB.XII.

Chronologically speaking, the earliest shots in CB.XII to have been filmed are those of the Elven Emperor's message and Corporal Barbie's dream, which were filmed along with the other Elven Emperor scenes (primarily for CB.X) in July 2015. The 1291 scene was filmed in March 2017, and the Doll Senate scene was filmed on 19 April, during which film-maker and director Tim Mercier (who was visiting Wrythe to film some scenes for a prospective documentary) had a cameo role voicing a guard.

The scenes involving Kronos were filmed on 26 July 2017; Sam Legg, a friend of Jonathan I and Princess Hannah, visited the Imperial Residence to film them. The remaining scenes were filmed on 29 and 30 July, and final editing took place over the first week of August.