Western Jarrahview is a territory of the Empire of Austenasia. It was established on 6 January 2021, and is approximately 155,000 square feet in size. It is located directly opposite East Jarrahview, the Australisian capital. It is situated in the south-west region of Western Australia, being about twelve miles from the most south-westerly point on the Australian continent, Cape Leeuwin.

Before European colonisation of the area, the surrounding lands were settled by the nomadic Wardandi people, an indigenous tribe.

Throughout the late 1800's and early 1900's, a campaign was spearheaded to settle the land surrounding Western Jarrahview, and use the land for the logging of native Jarrah and Karri trees, being renowned as some of the oldest and tallest in the world. However, many of the settlers experienced severe hardship, due to the lack of any facilities upon settling in the region.

On 10 December 2021, a large bushfire burning in neighbouring Australian lands came dangerously close to the Austenasian Territory, which at one point was placed within an “Emergency” zone established by the Australian authorities. Although the fire resulted in great damage to local bushland, it was extinguished before Western Jarrahview itself was damaged. 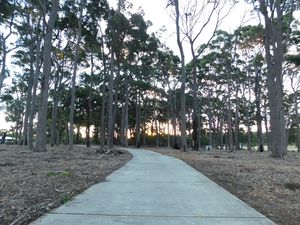 An image taken from the middle of Western Jarrahview, along a footpath. Pictured are the native Jarrah trees.

The landscape of Western Jarrahview is dominated by native Jarrah trees, and low lying Eucalyptus bushes.

During the spring and summer, magpies have been known to swoop people and animals walking through the bushland, in order to defend their young.