2020 assumption of emergency powers by Jonathan I

Between 25 May and 4 June 2020, emergency powers were temporarily assumed by Emperor Jonathan I of the Empire of Austenasia in response to a political crisis caused by deepening divisions in the House of Representatives. These powers granted the Monarch unprecedented and near-absolute control over the executive and legislative functions of government, and were used to impose order and to implement parliamentary reform. The political crisis at the heart of this incident came to an end on 1 June 2020 with the resignation of Prince Dionisiy I from the office of Prime Minister, who was succeeded by Lord John Gordon.

In the case of an absolute emergency when a change of any sort to the Constitution is unable to be made in this way [i.e., organising and holding a referendum and a supermajority of Parliament consenting to implementing the result], the Monarch may unilaterally make such changes as are necessary to the Constitution in a time of great crisis and existential threat to the state, with such changes to be reverted as soon as normal constitutional government is able to be resumed.

— Article II, Section E of the Austenasian Constitution of 2011

On 21 March 2019, Dionisiy Tezdzhan-Smahin (who two months later would become Prince of Montescano) joined Austenasia upon the annexation of Theodosiopolis, his then-residence. Over the following year, several other properties owned by Prince Dionisiy were also claimed for Austenasia, and annexed as the Harlemum March, the Territories of Laranda and Seleucia ad Cilicia, and the Crown Dependency of Trebizond. During this time, two other towns - Gebirgspark, and Chalcedon - also joined the Empire, claimed and administered by friends of Prince Dionisiy. This meant that by February 2020, Prince Dionisiy had built up a strong base of support, with control and influence over much of Austenasia, with his supporters organised into the Fatherland Party.

In the February 2020 general election, Prince Dionisiy ran on behalf of the Fatherland Party against Lord John Gordon, then of the Whig Party, and later an Independent. The Prince won the election on a platform of constitutional reform and assumed office as Prime Minister of Austenasia. 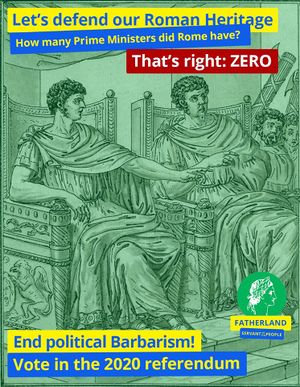 The infamous propaganda poster published online by the Fatherland Party.

25 May: Assumption of emergency powers

On 25 May, Prince Dionisiy proposed a bill which would have had almost all Austenasian claims administered by members of the Fatherland Party secede from Austenasia, similarly to the secession of New Virginia. Speaking on behalf of the Fatherland Party, the Prince claimed that their "ideas... [were] not welcome" in Austenasia due to the controversy surrounding the proposed constitutional amendments, despite their electoral success. The bill would have had over half of Austenasia secede, and passed the House, awaiting only Imperial Consent to become law.

Rather than granting - or even refusing - Imperial Consent, the Emperor persuaded Prince Dionisiy to withdraw the bill, and criticized the House of Representatives for having allowed their divisions and arguments to have driven the Empire to such a position. He argued that a majority of Austenasia considering secession should be considered an existential threat to the state, and announced his intention to assume emergency powers "to stop Austenasia from tearing itself apart."

At 8:56 p.m. (BST) therefore, Emperor Jonathan I assumed the following emergency powers and superseded the Constitution where necessary "in order to enable their enactment and exercise:"

1) The House of Representatives shall not meet or convene without a prior summons from the Monarch.
2) All titles, offices and positions shall be held at and by the sole will and permission of the Monarch.
3) The position of Proconsul is hereby created, to be held by two individuals each of whom will hold the powers and authority of the Prime Minister. The Prime Minister shall not be divested of his powers and authority, but the three shall work together under the direction of the Monarch to aid in the re-establishing of civil order and constitutional government. Lord Edward Gunderson, Count of New Grémmia and HG Bradley, Duke of Dullahan shall serve as the first two Proconsuls.

The referendum at the heart of the parliamentary divisions was brought forward to 12 June, and the Emperor stated that his emergency powers would last until 13 June, when he would decide to either relinquish or extend them depending on the circumstances.

Prince Dionisiy and Leader of the Opposition Lord Austin Jaax immediately voiced their support for the Emperor's decision to assume emergency powers, as did Duke Bradley (Princeps Senatus) and a majority of the Senate. The House of Representatives collectively signaled a desire for the recent disagreements to be put aside and for unity to be re-established.

By the time Jonathan I had relinquished his emergency powers, the Empire of Austenasia had gone through a dramatic and wide-reaching number of changes. The relatively new Prime Minister, Prince Dionisiy, had been replaced with Lord John Gordon; several land claims had left Austenasia, only to be replaced with one larger than them all combined in the form of Chersoneses; and the partisan parliamentary system established by Lady Admiral Hewitt had been abolished.

Although Lord Gordon would have automatically become Acting Prime Minister upon Prince Dionisiy's resignation, he was appointed directly to the position of Prime Minister proper under the provisions of the emergency powers assumed by the Emperor. Despite his high popularity (the 41% of the vote he had received in February's general election would have been a majority had the election been held without the land claims which left alongside Dionisiy), the House of Representatives held a symbolic vote of confidence in Lord Gordon's premiership on 22 June, with no votes cast against him. A vote of confidence was also successfully held in Lord Wilson's position as Speaker of the House.