Being a territory of Austenasia, Green Gate has a Governor, who is currently Lord Zarel Smith. As Governor, Smith is also de facto in charge of enforcing Austenasian law. Janus Smith is second in line to be governor incase Smith steps down or is otherwise unable to serve. 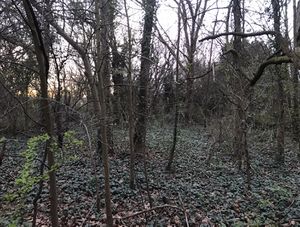 A forest in Green Gate.

Green Gate is in the shape of a almost perfect rectangle, with an upper point to the north. Green Gate is mostly surrounded by oak trees. There way a tiny lake in the northern most part called Green Gate Lake, however it has since dried up on October 2018. Green Gate is home to a large number of plant life.

There are two golf courses next to Green Gate, with a public path also bordering Green Gate. The robin and is the unofficial national animal of Green Gate, as they are very common.

On 8 April 2019, Jonathan I visited Green Gate. He brought the Austenasian flag with him, and took many photos of Green Gate.