His Majesty William Gordon Fowler Wilson I, is the first King of Gradonia. He is a co-founder and had been the first and only President of Gradonia. He also serves as a Consul in the Konlichstag in his capacity as sovereign. He was formerly a Gradonian politician during his tenure as President. One of his main political contributions was the foundation of the Gradonian Federalist Party. Aside from Gradonian politics, William has also been involved in a number of other nations associated with the Microwiki community. A notable example of his political involvement outside of Gradonia is Austenasia, where he serves as Prime Minister, and Secretary-General. He also formerly served as Deputy Prime Minister, Speaker of the House of Representatives, and Home Secretary.

William was born to then First Lieutenant, Jonathan William Wilson and Nicole Elaine Wilson in Shreveport, Louisiana at 9:02 p.m. CDT, 31 December 2002. After living in Shreveport for two years, Wilson would depart with his family for Kadena Air Force Base. His brother, Charles Eddie Payne Wilson, would be born in Okinawa, Japan on 24 August 2006. After living in Japan for three years, William and his family would again depart. They would resume residence in the United States in April, 2008. The Wilsons would live in Nashville, Tennessee for five years. While in the state, William would begin his formal education at Pleasant View Elementary School and would commit himself to Christ through baptism at First Baptist Church of Joelton. William’s sister, Noelle Elaine Wilson would be born in Nashville on 28 December 2012. Shortly after the birth of his sister, William would move to Poquoson, Virginia. Within three more years his family would move again, to the state of Texas.

After moving to Texas, William would develop an interest in different government styles and structures as well as political ideologies. In 2018, William and his brother, Charles, would found the State of Gradonia. The development of Gradonia would be the primary concern until March 2018 when he would discover the Micronational Assembly. This organization brought Gradonia into the Era of Connection and began William's career outside of Gradonia. In mid-June, Gradonia would be an observer to an event known as the 'Fascist Scourge' within the Assembly. This was mainly connotative to the rise of ultra-nationalism and authoritarian governments. William continued to keep Gradonia neutral but would capitalize on the event with the Charlington Press by doing late-night interviews with the leaders of nations part of the 'scourge'.

Soon after, in August, Gradonia would be a candidate to be a council nation for the Micronational Assembly Council in the southwest region of the elections. This would be a landslide victory for Gradonia. William would serve as Councilman for the region and propose an overhaul of the Assembly Charter, which had not been amended since 2017. In October 2018 the Chairman of the Assembly, Nicholas Miranda, would resign and give his position to William. Under the Wilson administration, the Assembly saw new changes that saw the clean-up of the admittance procedure and land claiming by member states. Soon into the administration, news broke that Google+, the platform that the Assembly operated on, was going to be shut down in August 2019. This news would change shortly before Christmas when the date was moved up to 2 April. Chairman Wilson called for the moving of the Assembly from Google+ to Discord. He would later step down as chairman after the February 2019 MA elections. 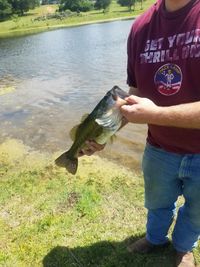 William holding a Bass caught on the 1 May 2020 IGS expedition. 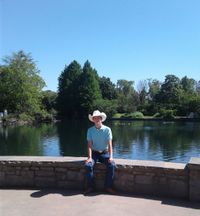 William sitting in front of Lake Watauga on the 30 May 2020 IGS expedition.

William would be involved with Austenasia as Consul to Texas after requesting, and being granted, the position in April 2019.

In January 2020, William would propose to form a town in Austenasia. On 19 January 2020, the Nahona Act 2020 was passed and William became the acting representative for Nahona along with the Count of Oribrazos.[1] During the February 2020 Austenasian elections William would be confirmed as representative of Nahona[2] and later became the leader of the Whig Party after Lord John Gordon would leave and form the Austenasian People's Party.

On 9 February 2020, William became a member of the Imperial Geographical Society and held an expedition in San Antonio, Texas the same day. On 1 May 2020, he would continue the tradition of an IGS expedition on that particular day by holding an expedition to the
Navasota River.[3]

During the political crisis which broke out in May 2020,[4] Lord William remained intentionally neutral concerning the attempts of the Emperor to restore unity,[5] and on the nomination of Prince Dionisiy, the Emperor appointed Lord John as the Deputy Prime Minister after Lord Edward Gunderson was removed from office. Lord William would, again, hold and IGS Expedition, going out-of-state to Tennessee, particularly Centennial Park and the Parthenon within.

In June 2021, William would return to activity shortly before the deterioration of Austenasian-New Virginian relations. During which time, he was added to the list of officials who would be representing Austenasia in a proposed summit to determine the future of the Treaty of Alliance between the two nations, as prescribed by Article 5 of the treaty.[10] However, following the 2021 New Virginian coup d'etat attempt the summit was canceled and in a joint motion with then Prime Minister, Lord Gordon, William initiated the cessation of the treaty through parliament.[11] Between the events, William, again with the support of Lord Gordon, proposed an Act of Parliament which would allow the Emperor to call a general election on 17 September 2021.[12] 16 August 2021, William would found the Arete Party which soon grew to include a majority of Representatives. Four days later, on 20 August 2021, Wilson would be confirmed as, alongside Lady Addison Dillon, Baroness of Blue Ridge, a candidate for the upcoming general election.[13] William's campaign was based on the three main policies of maintaining government activity, promoting Austenasian culture, and creating greater government accessibility and transparency for subjects. He would utilize video media throughout his campaign as well as promotional images. William would later go on to win the election with 76.6% of the vote, higher than any other percentage electing a non-incumbent Prime Minister.[14]

William would be involved with Baustralia as the Duke of Northumbria after ceding part of New Hesse to Baustralia. He would eventually lose his title of Duke to be a member of the Baustralian House of Commons. He would later be reinstated as Duke and become Lord Governor of the Whiskey Islands.

William is the co-founder of Gradonia. He and his brother Charles I would found the nation as a political experiment, but would later embrace the secessionist mentality after discovering micronations. In February 2018, Wilson would become President through a popular election. After the election, President Wilson would pass the Gradonian Feral Hog Control Act, and enact citizen and military recruitment measures to grow the nation.

William also founded the Gradonian National Bank and the Charlington Press, the former he would later sell for USD 35 to another Gradonian. These businesses inspired the creation of Edderton Jams and Jellies, and its subsidiary company Edderton Fuels. William would later become the head curator of the Gradonian Natural history museum.

William would later be involved with Ikonia as the Marquis of Novaria. He would later be made Minister of Foreign Affairs of Ikonia, but resigned on 14 March 2020.

His interactions with New Virginia would begin in late 2019, shortly before his proposition to the Austenasian government to found the town of Nahona. In February, William would design the coat of arms for New Virginia, later the Arms of the Defence Force and logos for both the Senate and House, shortly before its independence day.[16] In March, he would discuss the possibility of forming a town in New Virginia as well. On 31 March 2020, the Town of Carolinia would be annexed and William would be appointed Provisional Councilor.[17] On 23 May, William would be appointed to the Cabinet of the Provisional Government as Home Secretary and Director of the Environment Department.[18] In early July, with the assistance of the Director of the Department for the Census, the Home Office released an online citizenship application.[19] Later in July, William would join the Free Democratic Party to be a founding member[20] and contributed to the development of the party platform. On 23 July he, along with all other members of the Provisional Council, voted in favor of the constitution and popular referendum to enact it. He would also later organize the aforementioned referendum. Upon passing, the constitution granted William the title "Founder of the Commonwealth".[21] On 22 August, William would stand for, and win, the local election in Carolinia and become the Burgess representing the town in the House,[22] however failing in his run for Speaker.[23] Following the elections, William would remain Home Secretary and would present the first piece of business to the House of burgesses, following the confirmation of Prime Minister Lewis and the aforementioned Speaker election.

On 17 September, a week after he submitted his letter of resignation and a day after the passing of the Carolinia Act 2020, respectively, William would officially resign his posts as Home Secretary, Burgess for Carolinia, and Director of Environmental affairs citing personal dissatisfaction. Following the President signing the act into law Carolinia became a Territory and William was made Governor. He would later become the Iconographer General and Chief Judge of Roanoke. On 27 October, he would be nominated to become a Senator along with Anthony Clark and Jacob Valentine.[24]

William would be involved with Zenrax after being invited to help with efforts to revive the formerly inactive nation. William would be one of the founders of the Guilds in Zenrax, starting the Geography Guild in mid-July, 2019. Following one of the first decrees by the monarch, William would propose that the Senate of Zenrax, intended to be a provisional legislative body, be created to allow for the creation of legislation independent of the monarch.

After the creation of the senate and election of the Prime Minister, Wilson was appointed Minister of Energy, Science, and Technology (EST). This position, along with connections to the system of guilds in Zenrax, inspired the creation of Project Philomelos, a biofuel research project.

William is identified as Libertarian-Right on the political compass and generally describes himself as a Classical Republican, following Philip Pettit's Republicanism: A Theory of Freedom and Government argument of the "Non-domination position" as compared to the Liberal "Non-interference position". His economic belief supports few regulations by the government, excepting health and safety regulations, while also supporting government subsidies for small businesses. His social views are generally liberal without being progressive concerning topics relating to
sexuality or gender.

William is an active speaker against Article 13 and Article 11 of the EU Parliament. He supports the Scottish, Catalonian, and Quebecois Independence movements. Concerning the Quebecois movement, he does not support any past or present political faction that formed a pro-independence provincial government, such as the CAQ. He however does support the national Parti Quebecois. He condemns Russia's occupation of Crimea,[25] China's oppression of Uighur minorities,[26] and the blocking of humanitarian aid by the Maduro regime in Venezuela.[27]

William is a self-described moderate secessionist and a follower of the classical micropatriological philosophy. In most of his political career, William has joined center-right to right-wing political parties that outline or support popular liberalism or monarchism. He regularly supports federalist and trias politica forms of government. He is also an amateur scholar of Imperium and Suzerainty, particularly its application within the Holy Roman Empire and the Empire of Austenasia. Within New Virginia, William had, along with other members of the Free Democratic Party, helped develop the ideas of federal economics which defines that local areas are subject to their own economic systems while still being under the unitary standard of capital through the enforcement of a national currency.

— William Wilson, after the events of Raging Valentines

Heraldic lineage of William I in Gradonia