Edd, whose pedigree name was Hyerdunscar's Notorious Edd of Carothan, was a bullmastiff owned and loved by the Austenasian Imperial Family, who lived with them in the Imperial Residence. Edd was born in Bolton and bought from there by Emperor Terry in March 2009, joining Rose, another bullmastiff (his fourth cousin once removed). After Rose's death in April 2014, Edd succeeded her as Mascot of the Order of the Bullmastiff, and was also named Guardian of the Imperial Residence.

Edd was descended from the Frankental and Graecia kennels, both known for producing superb Champions in Britain and overseas. He qualified for Crufts 2010, 2011, and 2012 - attending the latter - and had a hipscore of 26.

Edd suffered from a mild stroke on 27 December 2016, but a visit to a veterinary surgery the next day showed him to have mostly recovered. He had a second stroke on 4 April 2017, and passed away later that day. His age at death - over eight years and three months - is considered a good achievement for a male bullmastiff. On 25 April, an urn containing his ashes was buried in Wrythe Pet Cemetery during a short ceremony attended by members of the immediate Imperial Family and Princess Consort Hannah. A hill near Warlingham was named after Edd in his memory by the Imperial Geographical Society on 1 May the following month, and he posthumously received the Weimar Service Award in 2019.

Emperor Terry planned that if Rose never had any puppies that the Imperial Family kept, then Edd would succeed her as Mascot of the Order of the Bullmastiff. It was unknown if Emperor Esmond III would follow this plan after the birth of Lily, Rose's only puppy, but after Lily was sold Esmond III announced on 16 September 2010 that unless Rose ever gave birth again, he would upon her death make Edd the new Mascot. Emperor Jonathan I passed an Imperial Edict on 19 February 2013 confirming that should Edd still be alive at the time of Rose's death, he would immediately succeed her as Mascot, which he did so on 24 April 2014. He was later given the title Guardian of the Imperial Residence by Jonathan I on 16 May 2016, the day before Pets Day.

Living in the Imperial Residence, over the course of his life Edd met the following dignitaries on their visits to Wrythe (this list does not include members of the wider Imperial Family):

Having such a good showing pedigree, Edd was taken to many dog shows in his first few years, and consistently come in the top three of his class.

There was at one point a requirement for the Mascot to be descended from Champion Ambassador of Buttonoak, and Edd was therefore qualified, being descended in the following way: 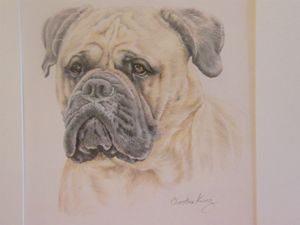 A painting of Edd by HIH Princess Christine.

Edd was descended from the Graecia and Frankental kennels of bullmastiffs, both well-known kennels of British and international Champions.