The Principality of Wildflower Meadows is a micronation which was established on 12 May 2016. It has been ruled by HI&SH Princess Hannah since its foundation.

The Principality was founded as a sovereign polity by Princess Hannah and her then fiancé Emperor Jonathan I of Austenasia, and claims sovereignty over an area surrounded by Cheshire and two surrounded by South London.

On 12 May 2016, Emperor Jonathan I and the then Princess Consort Hannah of the Empire of Austenasia visited Chester Meadows. While there, the Emperor granted his partner sovereignty over the meadows and over the walled city of Chester itself, founding the Principality of Wildflower Meadows with the Edict of Chester 2016. Hannah was crowned Princess of Wildflower Meadows as the principality's absolute monarch, reassuming a title that had originally been given to her in a May Queen-related event in April 2011.

On 14 October later that year, the couple visited Grosvenor Park, which at the request of the Princess the Emperor also annexed to the Principality. The following month, the couple also claimed Wandleside, consisting of a stretch of the River Wandle and its banks in south London, the first land of the principality not to come from Cheshire. A further claim of land in Cheshire, Maybridge - linking up the first three claims into a contiguous enclave of the United Kingdom - was made on 14 January 2017, and another in South London - Forestedge - on 12 April 2017.

Princess Hannah and Jonathan I remained the sole citizens of the country until 2020 when a new citizen joining in January and two more in February pushed the population of the Principality up to five.

Wildflower Meadows is an absolute monarchy, ruled by its Princess. However, the day-to-day administration of the principality's territories - which are divided into six realms - is undertaken by the British government, which does so by the permission of the Princess despite not recognising her claim to the land. Since 31 May 2016, the Principality has been a protected state of Austenasia.

As a protected state, the Empire of Austenasia is responsible for the defence of Wildflower Meadows. The Kingdom of the Grove is the only other nation with which the Principality holds formal diplomatic relations, having hosted Calum I of the Grove on state visits on 14 December 2016, 19 March and 16 June 2017, and 27 January 2019. On the third of these four visits, King Calum I and Princess Hannah signed a treaty of mutual recognition between their two states. Informal friendly relations are also held with the Empire of Adammia.

Although up to 90,000[1] people live within Wildflower Meadows, few if any are aware of this. Although the residents of Deva Victrix and Maybridge are technically under the jurisdiction of the principality, none have been granted citizenship and they are not claimed as Wildflowerian nationals. The only people other than the Princess herself to be a national of the principality are Emperor Jonathan I and three former students of the University of Chester, meaning that Wildflower Meadows effectively has a population only of five, none of whom actually live within the Principality itself at present. 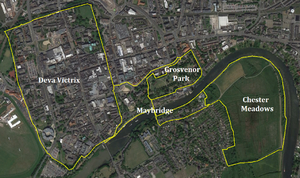 Wildflower Meadows is an exclave and enclave state, comprised of three non-contiguous territories. The larger of the two territories (comprised of the contiguous realms of Chester Meadows, Deva Victrix, Grosvenor Park and Maybridge) is an enclave of the British county of Cheshire, whereas the smaller two of the three territories, Wandleside and Forestedge, are enclaves of South London, bordering the London Boroughs of Sutton and of Croydon.

The Duchy of Chester Meadows measures roughly 2.749 million square feet and is one of the original two realms claimed on 12 May 2016. The land is uninhabited, and consists of grassland and wetlands by the River Dee, serving as habitat to a wide range of plants and animals. Although Deva Victrix is the principality's official capital, Chester Meadows nevertheless holds a superior position in terms of ceremonial precedence, due to being the site of the nation's foundation.

The largest of the six realms of the principality, and one of the original two to be claimed, the Duchy of Deva Victrix is the capital of Wildflower Meadows and measures roughly 5.596 million square feet and is home to most of the residential population of Wildflower Meadows. The realm consists of the part of the city of Chester that is within the city walls and contains a large number of medieval and listed buildings and popular landmarks. Deva Victrix takes its name from the Roman castrum or fortress that originally stood on the same site.

The second-smallest of the six realms of the principality is the Marquessate of Wandleside, claimed on 6 November 2016 and measuring roughly 74,000 square feet. Wandleside consists of a 550 feet-long stretch of the River Wandle and an adjoining area of grass and trees and is situated mere feet away from Princess Hannah's home in the United Kingdom.

The County of Maybridge, claimed on 14 January 2017, connects Chester Meadows, Deva Victrix and Grovesnor Park together. Measuring roughly 854,530 square feet, the realm spans the River Dee and consists of a northern and southern part.

The Barony of Forestedge, claimed on 12 April 2017, measures roughly 53,200 square feet and is, therefore, the smallest land claim of Wildflower Meadows. It is the most recently claimed realm of the Principality and consists of a grassy area of parkland bordered by the London Borough of Sutton.

The Princess is the fons honorum, and inducts knights and dames into these orders at her discretion.