The Marquessate of Wandleside is a realm of the Principality of Wildflower Meadows. Claimed from the United Kingdom on 6 November 2016, it is an exclave of the Principality, being an enclave of south London rather than Cheshire, and is situated mere feet away from Princess Hannah's former house in London.

Wandleside is a marquessate of Wildflower Meadows, over the entirety of which Princess Hannah holds absolute power as monarch. On 25 December 2016, Princess Hannah appointed her sister Lady Stephanie as the marquessate's Marchioness, but this title is ceremonial in nature.

Wandleside, consisting primarily of a grassy area next to the River Wandle near to her then house, was annexed by Princess Hannah on 6 November 2016, becoming the first claim of Wildflower Meadows not to be an enclave of Cheshire. The territory was officially annexed in a ceremony on the land attended by Princess Hannah and her fiance Emperor Jonathan I. On 27 December later that year, a security camera was set up on the adjoining British land, suspiciously monitoring the new annexation.

In spring 2017, barriers were installed in the road running past Wandleside, restricting vehicular access from the United Kingdom, and on 20 July later that year a plastic fence was erected around the land. This move by the United Kingdom was criticised by Princess Hannah, who sent letters of protest to Sutton Council and local British MP Tom Brake. In the event of an escalation of the blockade, Jonathan I promised Wildflower Meadows the full support of the Empire of Austenasia, of which the Principality is a protected state. 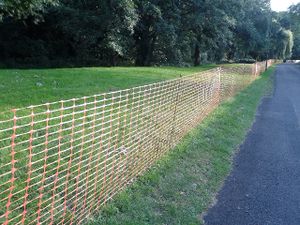 The plastic fencing erected around Wandleside by British authorities in July 2017.

On 27 July, following local British criticism of the blockade on the grounds of environmental and road safety concerns, unknown assailants pulled down and cut up much of the plastic fencing, but it was replaced by Sutton Council within a few days.

By the end of August 2017, it had become apparent that the blockade had ostensibly been put in place to protect Wandleside from heavy machinery when houses on the other side of the road from Wandleside were demolished and a construction site set up. This led to further criticism of Sutton Council from British residents, who complained that they had not been sufficiently consulted or informed about the scope or nature of the construction work.

No reply to the letters of protest sent to the British authorities was ever received. In early January 2019, the plastic fencing was removed, although the road barriers remained in place until the construction work finished in July, and the security camera remains up to this day. The Princess' family moved from their nearby house to Surrey in December 2019, but no change was implemented to the sovereign status of Wandleside.

Wandleside consists of a stretch of the River Wandle together with a majority of what is otherwise known as Richmond Green, a grassy area adjoining the riverbank to the north. Wandleside spans the river from the western end of a culvert taking the water from Waddon Ponds up to a point parallel with a certain lamp post designated as a boundary marker on the day of the realm's annexation. The Wandle is crossed by a bridge (with roughly two-fifths of the realm to the west of this bridge and three-fifths to the east), near to which is an information sign about the local area.