The Duchy of Deva Victrix is the largest realm of the Principality of Wildflower Meadows, and consists of the part of the historic city of Chester which is enclosed within the city walls.

Deva Victrix is a duchy of Wildflower Meadows. The title Duchess of Deva Victrix is currently held by Princess Hannah, who rules the entire principality as its absolute monarch, and will be granted to the principality's heir upon such a person being named by the Princess.

The day-to-day administration of the territory is undertaken by the government of the United Kingdom, which does so by the permission of the Princess despite not recognising her claim to the land.

A civilian settlement grew up around the fortress, likely originating with traders and their families profiting from trade with the soldiers.

The last evidence of the Roman army being stationed at Deva Victrix is in 383; if the legion remained any longer than that, it would have left at the latest in 407, when the western emperor Constantine III withdrew all troops from Britain to help him defend Gaul against a Germanic invasion. Direct Roman administration of Britain - including Deva Victrix - ended in 410, when local elites expelled Constantine’s officials in response to his failure to protect the province from Saxon invaders. The civilian settlement continued, using the defences of the fortress as protection from raiders.

A "sub-Roman" culture speaking a vernacular dialect of Latin survived in the area until the seventh century. Politically, the area fell under the rule of the Welsh kingdom of Powys before being conquered by the Anglo-Saxon kingdom of Northumbria in 616. Other than relatively brief occupations by the Danes, the settlement remained under Anglo-Saxon rule until the Norman Conquest of 1066; it was about this time that it became known as "Chester", ultimately derived from the Latin castrum or "fortress".

Under the Kingdom of England, Chester was used to defend against Welsh raiders and to launch attacks on Ireland, and was initially governed somewhat autonomously as a county palatine. During the English Civil War, Chester was a royalist city before falling to the Parliamentarians.

The Industrial Revolution gave the relatively non-industrial Chester a reputation of affluence and elegance, with the city becoming a popular place of residence for members of the upper classes. That said, the city did see a boost in industry, for example with the building of the Shropshire Union Canal and a leadworks shot tower. After the Second World War, large areas of farmland surrounding the city were developed as residential areas.

In September 2015, the now Princess Hannah took up term-time residency in a suburb of Chester upon beginning a four-year course at the University of Chester. She began a romantic relationship with Emperor Jonathan I of Austenasia in November later that year, from which point he has frequently visited her at the city. On 12 May 2016, during one of these visits, the Emperor granted his partner sovereignty over the part of Chester within the city walls (as well as Chester Meadows to the east), founding the Principality of Wildflower Meadows with the Edict of Chester 2016. Hannah was crowned Princess of Wildflower Meadows as the principality's absolute monarch.

Deva Victrix is situated on the River Dee, which runs along the southern border of the city. The city shares a border with Maybridge to the south-east for roughly 1,400 feet, from Bridgegate running counter-clockwise up to just past Peppergate; the rest of the border Deva Victrix is with the United Kingdom.

In common with most of the rest of the island of Great Britain, the city has an oceanic climate. Despite its proximity to the Irish Sea, the temperature range is similar to areas further inland, owing to the shelter provided by the Pennines to the northeast and the Welsh Mountains to the southwest. 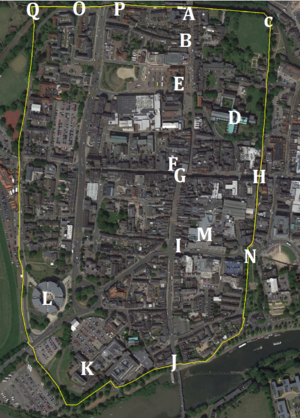