The County of Maybridge is a realm of the Principality of Wildflower Meadows, claimed on 14 January 2017. It connects the other Cheshire-based Wildflower realms, and includes various landmarks of Chester not included within Deva Victrix.

The name Maybridge is derived from two elements. The first, "May", refers to the month of May, more specifically May 2016. This was the month in which the Principality of Wildflower Meadows was founded, and was also the month in which Emperor Jonathan I and Princess Hannah first spent a substantial amount of time in the area which would soon be claimed as Maybridge, with the 30th of that month especially remembered by the couple as an enjoyable day out in the area.

The second element of the name, "bridge", most literally refers to Queen's Park Bridge (a suspension bridge over the River Dee that connects the main northern section of Maybridge with the smaller southern section on the other side of the river), but also to the realm's function as providing a physical link between the otherwise non-contiguous Wildflowerian realms of Chester Meadows, Deva Victrix, and Grosvenor Park.

The day-to-day administration of the territory is undertaken by the government of the United Kingdom, which does so by the permission of the Princess despite not recognising her claim to the land.

The borders of Maybridge are relatively arbitrary, drawn up in January 2017 by Emperor Jonathan I and Princess Hannah in order to connect the already claimed but non-contiguous realms of Chester Meadows, Deva Victrix, and Grosvenor Park while also incorporating various landmarks considered important by the monarchical couple. 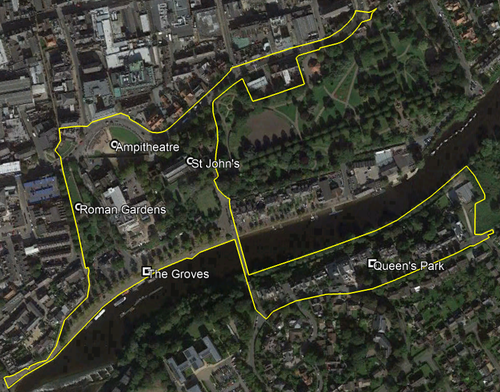 Maybridge was delineated and claimed by Princess Hannah by a decree on 14 January 2017, "with the consent and by the authority of" Jonathan I. The two monarchs then immediately toured the new realm, asserting the Principality's claim in person.

As Maybridge did not exist prior to 2017, its history is inseparable from that of the city of Chester, with its sites having been built alongside the growth of the city. The history of the realm can therefore be more easily understood from the perspective of the history of its notable sites and landmarks.

Although only one of these titles of nobility has yet been granted, Princess Hannah has decreed that the County of Maybridge contains two viscountcies and three baronies. The viscountcies are the Groves and Queen's Park, and the baronies are the Amphitheatre, St. John's, and the Roman Gardens:

Other notable sites in Maybridge include: