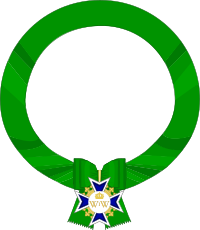 An example of the Knight Companion variant award of the order.

The Order of Charlington is a chivalric order in the Kingdom of Gradonia. It was founded on 26 August 2019, by the second decree of William I of Gradonia. It features two ranks: Knight Companion and Knight Stranger.

The order's emblem is a blue Maltese cross, ringed by coronets with the Gradonian Crown and cypher of the sovereign (companion) or the seal of the Konlichstag (stranger) imposed on a white circle over the Cross. The postnominals for members of the order are 'KCC' or 'KSC', depending on rank. The first members of the order, excepting the sovereign, were (TBA) through the Third Decree of William I, King of Gradonia.

The origin of the Order if Charlington was created on 26 August 2019, through the Second Decree of William I, King of Gradonia. This was the first award of Gradonia that was not related purely to state or the military.