Lewis joined the micronational community in late 2012 when she formed the nation Lewisia as a child. Throughout the 2010s she served in several micronations before joining Austenasia in 2013 through Terentia, a Crown Dependency. When Terentia became a town in 2014, Lewis entered Austenasian politics. Lewis served as New Virginia's Deputy Prime Minister, Speaker of the House, Chancellor, and Minister of Defense over a period of six years in Austenasian politics. In February 2020, Terentia joined several other Austenasian territories in establishing the Commonwealth of New Virginia, an independent state. Lewis was made acting Prime Minister in New Virginia in August 2020.

Lewis is the founder and leader of a micronational religious organization located in Shoreline, New Virginia, the Church of the Golden Road to Unlimited Devotion. The Church believes in an eclectic collection of spiritual beliefs loosely bound around the music and culture of the Grateful Dead.

Lewis was born in Western Massachusetts in October 1999, Lewis' early life was relatively simple and uneventful. She and her family lived in various homes in the Franklin County area, eventually settling at a home that would eventually become Shoreline. Lewis discovered and became interested politics and history at a young age, which would go on to inform her micronational career.

Lewis entered micronationalism in her early teens, forming 'Lewisia' in 2012-2013. Throughout her early micronational career she was involved in numerous small communities that would be considered simulationist in nature. Lewis' numerous projects eventually formed into Frieden. By all accounts, Frieden was a very instable project, with government changes happening frequently. This eventually came to a close in 2014 when Frieden joined Juclandia. Lewis had dedicated a section of her home as an Austenasian Crown Dependency, In 2014 this section of her property expanded to include her entire home, forming the Austenasian town of Terentia.

When Terentia became a town in 2014, Austenasia became Lewis' primary area of focus. Throughout the mid and late 2010's, Lewis served in various positions within the Austenasian government, eventually being appointed the sixth Deputy Prime Minister under Prime Minister Brooklyn Hewitt. She was the first person to be appointed to this role in June 2016. 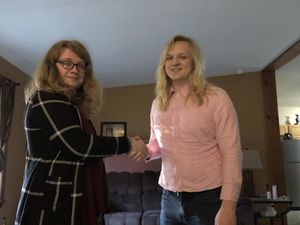 In 2016, Lewis founded the Imperial Party. Initially a civic nationalist party, the organisation slowly reformed itself under the leadership of Brooklyn Hewitt, growing to the size of ten members by 2018, being the largest political party in Austenasia. Lewis served as Chairman of the Imperial Party. In the summer of 2018, the Imperial Party held a conference of its members. In Lewis' speech, she promised that the Imperial Party would begin plans to formulate a working Austenasian currency, as well as appealed to the ideas of Austenasian unity and culture. Many of the economic ideas Lewis formulated would follow her to New Virginia, being implemented by the Treasury during her term as Prime Minister.

Throughout the late summer and early fall of 2018, Lewis found herself at the head of a cultural movement within Terentia. In Terentia, according to Lewis, there had always been a cultural identity that had never been outwardly expressed to the Austenasian community. Through legislation and public meetings of Terentians, a unique identity centered around the Grateful Dead and other such bands began to emerge. Terentians began describing themselves as a 'hippy enclave' within Austenasia. In September, Lewis founded The Church of the Golden Road to Unlimited Devotion along with a group of several other Terentians to serve as the spiritual and cultural guides of Terentian people. This identity would go on to become incredibly important to New Virginian and Shorelinian culture.

In February 2020 Lewis followed several other notable Austenasian figures in leaving the Empire of Austenasia, forming the Commonwealth of New Virginia. Lewis immediately devoted all of her micronational attention to the Commonwealth, becoming Prime Minister after the first general election. Lewis is the founder and leader of the Free Democratic Party of New Virginia, a political movement focused largely on cultural and economic growth within New Virginia. In December 2020 due to personal reasons, Lewis resigned as Prime Minister and was succeeded by Sophia Albina. Since her resignation Lewis has served in numerous positions, notably as Minister of Defence and as Commandant of the New Virginian Defence Force. Lewis remains active in New Virginian politics.

Lewis is the Commandant of the New Virginian Defence Force, and serves as a Lieutenant Colonel. She is the second Commandant, succeeding Alex Francis. Lewis directed the North American Command of the Imperial Navy of Austenasia, having formerly served as the Legate of Legio I Virginia and Tribune of Cohors I Nova Anglia in the Austenasian Army before said units were transferred to the Navy in March 2015. Although functionally a Vice Admiral, she held the rank of Admiral for reasons of precedence during her tenure as Minister of Defense.