The President is elected to serve for a two year term by an Electoral College consisting of most prominent national government officials, and there is no limit on the amount of terms a President can serve. The President's powers are enumerated by Chapter II of the Constitution, and include powers such as the authority to promulgate Acts of Parliament and to issue proclamations. The President is forbidden from holding any ministerial or judicial office or a seat in either house of Parliament for the duration of their term. The President does not belong to any particular branch of government, and has certain rights and authorities within each of them. There is no official residence for the President; however, it is common practice for the president's residence to be referred to as "Government House" for the duration of the President's time in office.

The office of President was established with the enactment of the Constitution by referendum on 1 August 2020. Dame Brooklyn Hewitt, the leader of the provisional government which governed following the Commonwealth's secession, was elected to serve as the first President. Following President Hewitt's resignation of 2 August 2021, Sir Adam Belcher has assumed the position of Acting President.

Following the enactment of the constitution, the Provisional Council was mandated to elect the first president. Two candidates - Sir Joseph and Sir William Wilson KNVI, then Home Secretary - ran for the office. Hewitt was elected with 80% of the vote and took the oath of office soon after in the presence of the Provisional Council, Cabinet, local officials, family and friends. 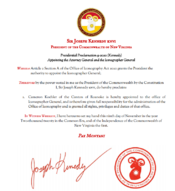 An example of a Presidential Proclamation.

The President has numerous powers, rights and responsibilities under the constitution and law spanning across every branch of government. The President appoints and advises the Government, is a component of Parliament alongside the Senate and the House of Burgesses, and wields the powers of pardon and reprieve over the judiciary. The President typically acts on the advice of the Prime Minister and other government officials, however in several circumstances they are free to act of their own accord.

The President discharges many of their duties through the unilateral enactment of Presidential Proclamations, through which they can appoint various officers of state, dissolve the House of Burgesses, grant honours, commission officers of the New Virginian Defence Force, declare holidays and periods of public mourning, and carry out other functions as determined by law.

1. Sign and promulgate the bill, upon which point it becomes an Act of Parliament with the force of law.
2. Refer the bill to the Senate for review regarding its constitutionality.

3. Withhold their signature for seven days, upon which point the bill shall be regarded as having failed.

a. Should the House hold a second vote on a failed bill and it passes with more than 75%, the President shall be compelled to sign it.

This system gives the President the power of veto (although it is never explicitly referred to as such) and falls under the President's broader authority as guarantor and protector of the constitution. The President can also refer an in-force Act of Parliament to the Senate for review. As of November 2020, the third option has never been invoked.

Office of the President

At present, two government agencies fall under the jurisdiction of the Office of the President: the National Security Council and the Office of Iconography. The National Security Council (or NSC) serves to advise the President in their capacity as commander-in-chief and to coordinate relevant government agencies to respond to questions and issues of national security. The Office of Iconography is responsible for the creation of graphic images for the national government and localities, and consists of an Iconographer-General and various Iconographers.

For an individual to be eligible to stand for election to the presidency, they must be at least sixteen years old, not be a convicted felon, and not be prevented by law from serving in political office (such as an impeached and convicted former President who is divested of the right to hold office by the Senate). Candidates can nominate themselves or be nominated by a member of the Electoral College.

The President is elected every two years by a special assembly known as the Electoral College. The Electoral College consists of houses of Parliament, all judges, all governors and all mayors; and is presided over by the Consuls. The election is held without debate or campaigning, and candidates for the presidency cannot be members of any political party. Individuals who are entitled to Electoral College membership but are themselves candidates for the Presidency can't vote. Elections have different rules and procedures depending on the number of candidates:

In the presence of the members of the Electoral College and before the people, I, A.B., do solemnly swear (or ‘confirm and declare,’ as the case may be) that I will protect and maintain the Constitution of the Commonwealth of New Virginia and uphold the laws of the Commonwealth, that I will faithfully defend and serve as commander-in-chief, that I will fulfill my duties conscientiously in accordance with the Constitution and the law, and that I will dedicate my abilities to the service and welfare of the New Virginian people.

A motion to impeach may be filed at any time by any Burgess, and the Speaker of the House shall immediately open a period of debate lasting at least twenty four hours. The President may be questioned by the House during this period, and he may make statements and present evidence in his defence. Following this period, the House shall vote for a period of at least twenty four hours; should more than half of the BPs vote in favor, the President is thereby formally impeached and moves to the Senate for trial.

A trial of impeachment is held in the Senate, presided over by the Consuls. As the President of the Senate is first in line to succeed the President in the event of a vacancy, they are excluded from the proceedings of the trial itself (unless called to testify) but are allowed to attend. The Senate has yet to adopt standing orders regarding trials of impeachment; therefore, their precise methods of procedure are unknown as of yet. The Constitution mandates that seventy-five percent of the Senate is needed to vote in favor of conviction to remove the President from office, and the Senate may additionally vote to prohibit a convicted President from standing for election to public office for a period of time at their discretion.

The office of Acting President was first assumed by Sir Adam Belcher on 2 August 2021.