The 2021 New Virginia General Election was the second election to the House of Burgesses in New Virginia.

In August 2020, Dame Elizabeth Lewis became the Prime Minister of New Virginia, initially serving in an acting capacity in the Provisional Council of New Virginia prior to the 2020 election.[1][2]

Initially commanding a majority over the House of Burgesses under the Free Democratic Party (New Virginia) and a short-lived coalition with the New Virginian Patriotic League, the rise of the newly reformed National Party and the emergence of the Commonwealth Whigs diminished this and produced a hung parliament. Eryn Lewis resigned in December, leading to the House voting on a new Prime Minister. Due to the abstention of Leon Montan and the absence of Bainbridge, the vote resulted in an even tie. A re-vote ensued shortly, confirming Dame Sophia Albina as the new Prime Minister.[3][4] The Free Democrats also formed a new coalition with the Whigs, installing Thomas Bainbridge as Deputy Prime Minister.[4]

The governments majority however would remain at stake. Following the vacancy of a seat in New Franklin, a by-election was called in New Franklin.[5] In a run-up to the by-election however, a series of events would rock the Commonwealth. After a series of scandals, Bainbridge retired from politics and dissolved the Commonwealth Whigs, once again producing a hung parliament.[6][7] A vote was called in the House of Burgesses to call an early general election, which passed unanimously.[7]

Date of the election

President of New Virginia Brooklyn Hewitt issued a proclamation confirming the dissolution of parliament, and setting the date of election on 7 February. A period of political campaigning would ensue between 26 January and 6 February.[7] On the day of election, polls were open from midnight to 8pm Eastern Standard Time.[8]

The following candidates withdrew from campaigning or had support from their party withdrawn after the close of nominations. None of these candidates were elected.

The Free Democratic Party and the National Party have been the two biggest political parties, with the Free Democrats having governed since the 2020 election, briefly holding a coalition with the New Virginian Patriotic League and later the Commonwealth Whig Party up until shortly prior to the dissolution of parliament.

The Free Democrats supported the preservation and promotion of local cultures.[8] The Greens took a similar position, promoting multiculturalism on the basis of it being a founding principle of the commonwealth.[10]

In contrast, the Nationals wished to bind local cultures into a single unifying national culture, intending to create and appoint a dedicated Minister of Culture.[11] The policies of the nationals were criticised by the Free Democrats in a campaign statement, stating that "They want to strip our diverse cantons of their cultural autonomy. The Nationals even call our thriving local cultures a source of weakness".[12] Similarly, the greens stated their strict opposition to the notion of "cultural imperialism".[10]

The Free Democrats supported initiatives to help citizens start up businesses and circulate the uncia through a national currency exchange in order to build a "dynamic economy".[12]

The National Party supported the independence of the bank from the government. Additionally, they sought to remove restrictions that would "hurt economic growth".[11]

The Greens opted for a simple policy, promising to keep the structure of the bank the same unless necessary. They also promised to support worker co-operatives, except those involved in damaging the environment.[10]

The Nationals supported electoral reform, decrying the first past the post system used in the nation. The party supported the implementation of proportional representation within the at-large cantonal seats.[11] The Greens took a similar stance, promising to pass a bill to revamp the electoral system, alongside supporting direct democratic initiatives and referendi to give the citizenry an increased voice in New Virginia politics.[10]

Adammic Online Broadcasting conducted an exit poll alongside their live election coverage, predicting the number of seats for each party.[8][13] 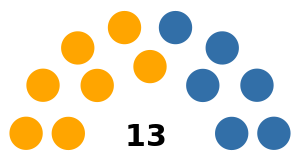 A summarised results of the parties that competed in the election is as follows:

During the general election, a single seat changed hands from the Free Democratic Party to the National Party.