East Wrythe is an exclave of Wrythe, capital of the Empire of Austenasia. It is used as the embassy of the Kingdom of Copan to Austenasia, the only embassy on Austenasian soil, and measures roughly 770 square feet. 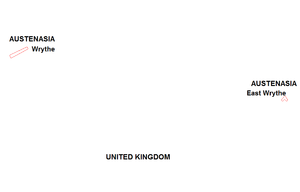 The location of East Wrythe in relation to the rest of the Town, surrounded by the United Kingdom, sizes and distances to scale (click to expand).

East Wrythe is comprised of a garden and patio which are adjacent to the house of Queen Emma I of Copan, the house itself being in the United Kingdom. East Wrythe was annexed on 14 April 2014 by an Act of Parliament which granted it extraterritoriality - as an embassy of Copan, Copanese rather than Austenasian law applies in the territory, despite it being fully part of Austenasia.

A celebration of the first anniversary of the Liberation of Orly took place in East Wrythe on 24 June 2014. The embassy was chosen due to being in a sense both Austenasian and Orlian, and therefore fitting for a celebration of the end of foreign rule in the Carshalton Nations.