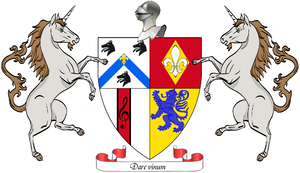 Andrew Hall was born to Reginald Hall and Winifred Hall on 21 October 1971. He studied music at university and has since worked with Kevin Belcher, the now-former husband of Hall's sister Jayne, on a number of occasions: he was the lights operator for the 1990s pop / rock band Isis which Kevin and Jayne both played in, has played in brass bands which Belcher has conducted, and spent a few years rehearsing with him for a guitar-piano duo which was ultimately abandoned. He has held various jobs, and currently works at an elderly care home.

Hall became a citizen of the Empire of Adammia after the Treaty of Annexation for Tytannia and Sapientia was signed on 28 April 2013. He became a member of the Ruling Council after the Emperor appointed him Foreign Citizen Liaison Secretary (now known as the Delegate of Abroad Citizens). After Emperor Mother Jayne was elected Prime Minister, she appointed him to her first cabinet as Minister of Culture on 29 September 2013. After Tytannia Ulterior was claimed by the Adammic Army on 12 January 2014, he was appointed as its Count. He generally had little involvement with Adammia besides helping to prepare various cultural celebrations on Foundation Day and New Year's Eve.

Hall spent several months as an opposition backbencher after his department was merged into the Ministry of National Development in August 2017. He did not stand for re-election as Delegate of Abroad Citizens, and effectively retired in November 2017.