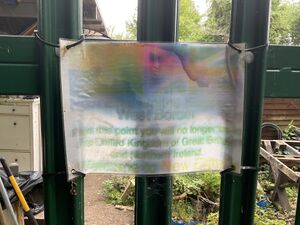 A ruined sign at the New Eiffel-United Kingdom West Border, seen in August 2021

The nation had unconstitutionally been declared dissolved after losing control of its territory a few days prior due to the opposition of the other four residents being uninterested in continuing to live under the New Eiffelic government. This ultimately came after the crisis in New Eiffel, where Zabëlle I, first Prince and founder of New Eiffel and its predecessors abdicated, thus crowning his younger brother Janus Smith Prince on 20 June 2020. Janus had later expressed on 30 July that he was uninterested in ruling on, and made remarks hinting at him wanting to disestablish New Eiffel, which, although, would have been unconstitutional, added further instability to the ongoing crisis.

The status of New Eiffel's dissolution has been subject to debate. The official dissolution is unconstitutional, however, New Eiffel de facto no longer possessed any control over its mainland territory. Despite what Zed had claimed, the monarchy was also not officially dissolved either, and the last prince Janus never actually abdicated. New Eiffel cannot be able to constitutionally function nor find a legal successor to the state however.[3] Though, an unofficial successor nation claiming the eponymous title and exact territory could hypothetically be declared a successor.

The Kingdom of True New Eiffel, which was established a month prior and claimed mainland New Eiffel with no control over it had taken legal control of the erstwhile territory Lodia, leading some to call it an indirect successor state to New Eiffel.

The Grand Unified Micronational recognised the dissolution of New Eiffel on 8 November via an Executive Order by the Chairman, and declared it was no longer a member state.[a] New Eiffel was also expelled from the Cupertino Alliance on the same day, after having been purposefully delayed so Superior Judge Zabëlle Skye could find another delegation to continue to serve. 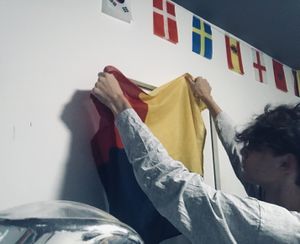 New Eiffelic sovereignty had never enjoyed the full support of all five residents living within the claimed territory, though large opposition began growing after the start of the crisis in December 2019.

Prime Minister Maria Smith had become more occupied by work and decided she would not for reelection in the 2019 general election, which than saw Janus Smith elected. Throughout January–March 2020, the other residents, who had already became largely inactive and uninterested in New Eiffel, began showing signs of opposition towards its claimed sovereignty, particularly coming from Janus who was a British patriot. New Eiffel had already begun the transition to allow online citizens to vote and hold more government offices. As a result, Janus was later removed via a motion of no confidence on 20 April. Though it infuriated Janus, he nevertheless went on to eagerly accept his coronation on 20 June after Zabëlle I announced his abdication a few days prior.[4] Janus quickly became uninterested again, and on 30 July he made remarks hinting at him wanting to disestablish New Eiffel, which, although it would have been unconstitutional, added further instability to the ongoing crisis.

After months of attempting to find a solution with Janus, with some proposals including changing New Eiffel's territorial claims, the other residents sided with Janus and had publicly expressed their opposition to New Eiffel's claim to sovereignty.[1][3] As the decision was very impetuous and came with large opposition, Zabëlle was unable to prepare any special event, and instead wrote a heartfelt speech which was released alongside a second official document which announced the dissolution as officially being 1 November in 12:00 p.m..[2] The announcement of the dissolution came as a large shock to New Eiffel's non-territorial citizens as well as the MicroWiki community, especially since the crisis had just ended in October after nearly eleven months. Zabëlle was also largely unprepared, so the aftermath of the dissolution has been handled slowly.[1]